Where there is music in Philipstown, there is, more often than not, Al Hemberger or Andy Revkin up there on the stage. Between them, Hemberger and Revkin have been in multiple incarnations of local bands, so if you think you saw one or the other in Tiki Daddy, Uncle Wade and/or the Breakneck Ridge Revue, along with some nameless groups of the ad hoc variety, you’d be right on all counts. 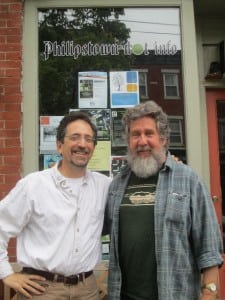 Andy Revkin, left, and Al Hemberger outside of 69 Main, where they’ll be performing on June 1.  Photo by A. Rooney

On Saturday, June 1, they’ll take center stage, sharing their individual songs and, as importantly, the stories behind the crafting of these tales set to music, as part of the A Song Is Born series that has been presented this year at 69 Main St.

The two “get along musically, very well,” said Revkin, environmental journalist by day (he won’t be easily reachable from now until this gig, as he’ll be in the Arctic, attending a conference), “not to mention Al’s musicianship: his songs have all these injections of humor, plus melodies — they feel like your favorite old shirt.”

Hemberger called that “a subject in itself,” sporting a specimen of that genre of apparel. Hemberger recalled meeting Revkin for the first time at a barn dance at Saunders Farm. Revkin lived on the Saunders property after moving up to Garrison from Brooklyn in 1991. “We would have jam sessions around the fire,” he remembered. “I saw a guy playing left-handed,” said Hemberger, “and it caught my attention; later I got to know you.”

They agree that they really came to know each other at the Listening Room songwriters’ concerts produced by Ken Veltz around 2007-08. Hemberger was engaged by a story Revkin told about the genesis of his song “Arlington.”

“It was an incredible song. I’m sitting there trying to remember how to play my own songs, and then I hear this story about a train in D.C. going to a funeral.”

“It was the Metro actually, and a family coming from a funeral,” said Revkin, “and the point was that Arlington National Cemetery was running out of room, which led me to ‘Where will they go when they run out of room?’ I thought it could be an article, but more a song.”

Hemberger, who is a music producer running Bronxville’s The Loft Studio, was so taken with the song that he tried to get it some radio play, without meeting with much success.

Revkin first started playing guitar when he was 17. Decades later, he is finally recording his first CD this year. Having performed a solo show telling his autobiography in song a number of years ago at the Depot Theatre, he loved the A Song Is Born concept of telling the story of how songs came along. He plans on singing a few songs he’s never done before, as well as a few he has revised — something Hemberger knows all about. “Lots of times it’s not until you get it into a format where you can listen to it yourself that you find out what works and what doesn’t,” he said.

Hemberger started writing songs at 15, before he knew how to play any instrument. He wrote for the shows being performed at the Loft Theater nearby, which was then a children’s film and theater center, before evolving over time into a recording studio. He called his songwriting now simply “whatever occurs to me.”

He doesn’t take his cues from the contemporary artists (including Rihanna) now recording at The Loft. “The studio doesn’t really interest me as a songwriter; I don’t want to be a pop writer. I don’t want to put my heart and soul into things that are 30 seconds long. I want to concentrate on stuff that means something to me.” Hemberger isn’t interested in writing polemics or other “flash-in-the-pan current political stuff,” but rather “something general and humorous, as in, ‘It is that bad, but it’s not that bad.’”

For A Song Is Born he promises to “bring out some that people haven’t heard. One from when I was 20, some from The Loft catalogue, plus a current one — maybe even a brand new one.”

Revkin too, may debut one he’s working on, entitled “Life Is a Band,” which alludes to his trajectory. “I started out as a solo songwriter, then discovered that family is the bedrock.”

“We’re both storytellers,” said Revkin. “Al’s particular humor plays a frequent role. Some of his lyrics are hilarious. Also, he sings a number of songs about love and the aftermath, the travails. And he’s a bass player so there’s a good beat! People will enjoy what they hear.  We both convey life’s ups and downs.”

Hemberger added, “Andy’s songs are moving and humorous.” Turning to his partner in song, he said, “I picture you smiling while you’re doing it — you’re enjoying it.”

Referring to them both, Revkin said: “Every kind of music has a role. There are rabble-rousers, but we’re quieter — part of the human landscape, that’s my take; getting people to reflect on the state of the world, but not in a ‘you should’ way, not preachy.”

A Song Is Born featuring Hemberger and Revkin will take place at 69 Main St., Cold Spring at 7 p.m. on Saturday, June 1. Admission is free and no reservations are required.

Hemberger and Revkin played together in an Uncle Wade performance recorded at Philipstown.info in 2011.

2 thoughts on “Sing and Tell: Al Hemberger and Andy Revkin at A Song Is Born”