Popular worldwide, it is a ‘smorgasbord of socializing and sharing ideas’

PechaKucha is coming! PechaKucha is coming! No need to run for cover, unless the idea of participating in a gathering where the sharing of creative ideas, along with community, fills you with alarm. The Garrison is playing host to four PechaKucha Nights over the next six months, with the debut outing slated for Thursday, June 6.

PechaKucha — the Japanese word (and onomatopoeia) for “chitchat” — is a presentation format devised 10 years ago in Japan, by the principals of Tokyo’s Klein-Dytham Architecture. An immediate hit, it has grown to worldwide popularity; at last count PechaKucha Nights have taken place in over 600 locales around the world.

Seeking a forum — and looking for a way to attract people to their experimental event space — in which designers could meet, show their work and exchange ideas and enthusiasms, but wary of the potential tedium of presentations without parameters, Klein-Dytham came up with a mix of successive, entertaining talks marked by brevity: each presentation lasts precisely 6 minutes and 40 seconds and consists of 20 slides. Each presenter is quickly followed by another — usually there are about 10 or 12 speakers per PechaKucha Night — and when the talks conclude, the socializing, abetted by a cash bar, ensues, and hopefully ideas are shared and introductions made.

PechaKucha has been described as a mix of show-and-tell and happy hour. Chip Allemann, general manager of The Garrison, who along with John Danzer is the organizer of these nights, has dubbed it “TED-lite,” referring to the now-ubiquitous “ideas worth spreading” technology, entertainment and design conferences. “It’s informative,” he said, “but not heavy, and it clips right along — it’s a smorgasbord of ideas, collections, trips, all non-thematic, although originally it focused largely on design and there’s still that element to it.”

It was Danzer who first experienced PechaKucha, when he attended one at the Parrish Art Museum in the Hamptons. He described it to Allemann, who agreed that it was a great idea. Allemann called it “totally cool — a real community-building kind of event; an opportunity to get together built around interesting, fun ideas — not at a bar or online.” He thought that The Garrison would be the perfect venue. “The goal for this is to have it be fun and social,” he said. 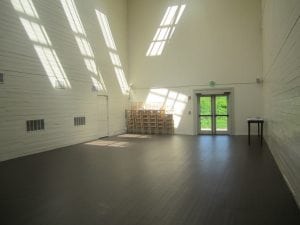 The future home of PechaKucha Nights at The Garrison (Photo by A. Rooney)

To become an area organizer, Allemann and Danzer had to apply to the PechaKucha organization, for “a loose kind of licensing,” but the process was straightforward. As Allemann described it, “The only constraints PechaKucha puts on organizations is strict adherence to the format, and that there be a bar.” PechaKucha at The Garrison will take place in what was formerly the yoga room. It’s an airy, open space where a large screen will be visible to a roomful of people. After the presentations, guests can mingle with speakers, with approachability the name of the game.

“The idea of community interests so many of us,” said Allemann. “Here in the Hudson Highlands people often stay at home, whether they live here year round or they live in the city and come up on weekends. Frequently, people just don’t get to know each other. This is a way for people who maybe want to meet other people to get out and do it. This will get people up and moving about and listening, and not at a bar; it’s about ideas.”

Allemann said there has been no for difficulty (for Danzer, who is in charge of this aspect of the evenings) in obtaining speakers, who “for the most part, are well known in their fields.” Some live locally, and some will incorporate design elements in their talks. At press time, a few projected topics include organically managed public parks; creative hybrids spawned by science and art; designing trains in China; and Constellation: A Public Art Project on Bannerman Island.

At other PechaKucha Nights, the presenters have frequently been enlisted from the design, architecture, photography, art and creative fields, along with academia. Others have spoken about their travel passions, collections or hobbies; by all accounts, the concise nature of the talks pares things down and the framework assists the presenters in getting to the core of their subject.

PechaKucha Nights begin with socializing at 6 p.m. and have a $5 admission charge. After the presentations there will be a cash bar as well as a small plates menu available in The Valley restaurant, also within The Garrison. Reservations are required, and can be made by emailing [email protected]; the reservation will be confirmed by reply email. There will be additional PechaKucha Nights Aug. 29 and Nov. 21. For more information, visit thegarrison.com and click on the link to PechaKucha found at the bottom of the homepage.

The Garrison also hosts community barbeque buffet nights outdoors on their front lawn during the summer, with family-friendly dining followed by music and dancing. These will take place on Thursday evenings, July 11, 18, 25, and Aug. 1 from 6 p.m. onwards.