Variety of practices in yoga and Pilates at Cold Spring studio

Melia Marzollo says that her studio, Skybaby Yoga, is all about “learning how to be with yourself — your own physicality. We focus on what we can do instead of what we can’t do: this is about yes. We work with what works.” Skybaby is newly birthed, having opened just over four months ago. In addition to Marzollo, there are currently 14 other teachers offering classes in a range of styles and techniques, with clientele ranging from “in utero through people in their 80s,” said Marzollo, who is quick to praise her teachers and students. “This would not be possible without the community I have, and the instructors; this is our studio, not my studio.” 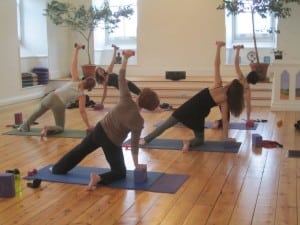 Using the weights and blocks in a FORMethod class taught by Paula Carnabuci (facing camera.)

The striking space at Skybaby was formerly — for 67 years — a Masonic Lodge Meeting Hall. The Skybaby Building, built circa 1864, was owned by longtime Cold Spring residents Steve and Cecile Lindstedt for 38 years. The Lindstedts, artists, used it as a combination living and studio space, and Cecile Lindstedt’s colorful paintings still adorn the walls of the bathroom. They named the building after their daughter Skye, whose nursery occupied one of the back rooms. Marzollo asked their permission to name the studio similarly and was told they’d be honored.

“The Lindstedts’ energy and love is here,” said Marzollo. “We’ve kept a lot of what they had, and we honor, respect and cherish it — we’re another chapter; we feel we have such a gift here.” The main room, located on the third floor, is a large and serene space, flooded with light and a fantastically high ceiling, painted a cerulean blue. The floor, as Marzollo pointed out, “has been here for 200 years.” A large black and white photo displayed near the entrance shows the exterior of the building during the 19th century, replete with an awning and posts for horses to be tied up.

Classes are offered seven days a week — some during daytime hours, others in the evenings — and include Pilates (mat and tower) as well as a variety of forms of yoga, including Kundalini; Vinyasa; Align and Flow; Express Flow; Gentle Flow; Power Flow; FORMethod; Yin Yoga; and even the evocatively-named Yoga for Stiff People. On Sunday mornings there is a live music flow class, and on Thursday afternoons there is a class designed for 12- to 17-year-old girls called Miss Empowered, geared toward building self-esteem. A series of classes for younger children is currently being offered during daytime hours for preschool-age children and after school for younger elementary-age kids. 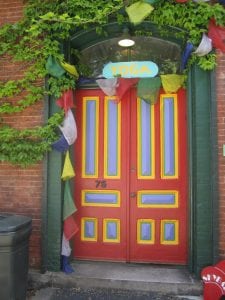 There are also many special classes, including a prenatal yoga series; workshops, such as a last weekend’s Releasing Neck and Back Pain; and guest teachers. Upcoming in June is a “pop-up juice shop,” which will be open for three hours in the morning and again in the evening as part of an overall “Cleanse Philipstown” program, which is “not meant to be deprivation,” said Marzollo, but to offer a guided diet of raw foods and juices, online access to health coaches, participating restaurants with special menu items and a dance party at the end to celebrate.

Marzollo’s path to becoming a yoga studio owner was unplanned and shaped by circumstance. She began her professional life as a school teacher — she actually did her student teaching at Haldane. She was teaching writing at Western Connecticut University and wasn’t sure if the academic lifestyle meshed with what she wanted from life.

Having “always done Pilates and yoga,” she did a weekend certification to “deepen my practice.” While waiting for a table in a nearby restaurant, she wandered into a Beacon yoga studio, “literally having just gotten certified. That studio needed a Pilates teacher and they asked me if I’d like to teach a class.” Although it was initially moonlighting, Marzollo “felt that energy and freedom that comes from being able to move yourself physically — it was a healthier lifestyle for me. Schoolteachers are amazing, but I couldn’t find the balance. I slowly began to teach more classes and get more educated. Any time I had a school break I did more training.”

The Beacon studio closed and Marzollo moved on to work for All Bodies Pilates in Cold Spring, where she said she learned a lot. Adding certification in Yamuna Body Rolling and yoga, she then ran Vikasa Studio with (her current instructors) Lara Demberg Voloto and Kathy Toris Rowe. Vikasa had to close due to extensive damage from Hurricane Sandy, and Marzollo, with very short notice (three weeks from closing on the Skybaby building to opening the studio — with much help from her family, she said) took the plunge and opened this new studio.

“It’s hard to make a service business last in Cold Spring,” she said. “The small population means that it’s difficult to survive. So adding this physical space to the most dedicated instructors is the key that turns the lock.” 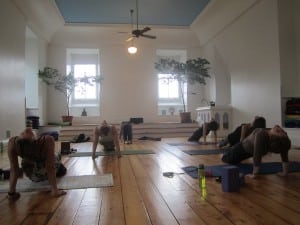 A FORMethod class in the large Skybaby studio main room.

Marzollo, about five months into a pregnancy, taught a Pilates tower class recently. For a solid hour she guided the participants — using Pilates mat tables backed by a “tower” built with bars and coils with strap-on pulleys — through a strenuous sequence of positions and exercises that ebbed and flowed. Her directions included: “Go east and west, extend leg, flex toes to knees, arms extended … grab bar, make sure your knees are under the bones of your hip, drop tailbone down, extend arms long, take a breath in, look side to side, exhale. Your air is billowing in the body, you’re expanding.” Different parts of the body were accentuated throughout the hour, from limbs to abdominals, and breathing remained an overall focus.

“It’s all about the integrity of the move,” she told the class. “You don’t need to do a hundred sit-ups; if you do it with integrity, you can do five.” Marzollo further defined Pilates: “They call it intellectual because you have to be ‘in it’ the whole time — you can’t lose your concentration.” The Pilates class came to a conclusion with Marzollo telling the participants to “find the energy under the arches of your feet. Feel the beautiful line, up to the crown of your head, which draws your spine up to the heavens. When you end standing, you take it with you.”

In another class, a FORMethod yoga session conducted by its creator, Paula Carnabuci, she led the group in a deceptively calm, slow-paced, deliberate yet quite vigorous series of exercises, stretches and isometric contractions, many involving resistance work. She conducted the class, which included the use of blocks, bands and weights, in an instructive, confident yet soothing manner, and always with an emphasis on “caring about not overdoing it” — saying at one point, “If your neck says it is not okay, just keep your chin down. If you feel it’s too much, pull back to where you are comfortable.”