In what Mayor Ralph Falloon termed “the second installment” of the Cold Spring Village Board’s foray into collaboration with the village’s other boards, a week after its joint meeting with the Planning Board on the Butterfield development, the Village Board sat with members of the Historic District Review Board (HDRB) to discuss The Grove and board appointments on Wednesday, May 29. 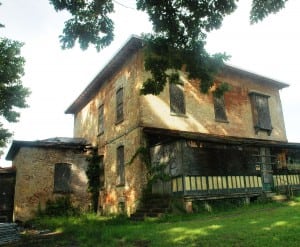 The village in 2003 acquired The Grove, the abandoned house on the hill across from the Foodtown and Drug World plazas on Chestnut Street, which was built around 1853, designed by architect Richard Upjohn and belonged to Dr. Frederick Lente, the physician for the West Point Foundry.

On the State and National Register of Historic Places, the building has been derelict and deteriorating for years, with the estimated cost of renovation rising over time, according to Trustee Matt Francisco, to around $1-2 million. The village’s last request for proposals (RFP) to purchase the building in March 2012 resulted in only one offer of $1,000 to renovate it as a single-family home, which the board at the time deemed inadequate.

The two boards discussed what the village should now do with the building, as Trustee Chuck Hustis suggested reissuing an RFP earlier this spring. The consensus expressed Wednesday was that the village should try to do everything possible to preserve the building, since it is in the historic district, either selling or leasing it to someone interested in renovating it or renovating it for municipal use, on their own or in partnership with a private entity.

HDRB member Carolyn Bachan noted that the last RFP was “advertised minimally” and recommended publicizing it at the national level this time. She later volunteered to contact several publicity outlets as well as preservation organizations before the two boards meet again on The Grove. Likewise, HDRB member Kathleen Foley said she would contact the Preservation League of New York State to find out options for saving the building.

Audience member Tom Rolston, who lives next to The Grove on Grove Court, proposed tearing it down and selling the bricks to a salvage company, which was met with disdain from HDRB members. He asked why the village would want to spend such a large amount of money on a building that would have no profitable return, but Foley insisted that the village get a professional opinion on whether the building, an example of Upjohn’s architecture, is beyond saving. “With all due respect, you are neither a preservation architect nor an engineer,” she said to Rolston. 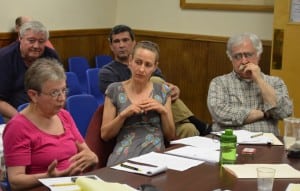 The boards agreed that they should try to get someone with a preservation background to look at The Grove again, in order to determine what stabilization measures are needed at this time (to address issues such as the porch, which Rolston exclaimed was rotting) and what possibilities exist for preservation.

When Francisco suggested such a survey, Rolston shouted: “Oh please, it just cost $30,000! They just did it!” referring to the study that was previously conducted. HDRB Chair Al Zgolinski and Francisco assured Rolston that they would not require a full study, so it would not cost $30,000 to do a quick baseline study. Zgolinski later said he would volunteer to contact the contractor who conducted the previous study.

One audience member, Steve Marino of Nelsonville, told the boards that he has been interested in purchasing The Grove for years in order to renovate it into a home for his family. Employed by Tim Miller Associates, Inc., the planning and environmental consulting agency currently working with Butterfield developer Paul Guillaro, Marino would be able to renovate the building at lower costs with the help of friends and family in what Francisco called “a labor of love.” Perhaps due to the lack of publicity on the last RFP, Marino had missed the opportunity to make an offer last year.

With the news that there might be more interest in the building, the boards proceeded to discuss other action items that would need attention before the two boards meet again Wednesday, June 26, at 7:30 p.m. This included compiling notes from meetings of a previous Village Board committee on The Grove, before the building receded to a backburner over the past year. Trustee Bruce Campbell said he would look for the notes in the Village Hall.

On the agenda was the appointment of two new members to the HDRB, for which three applications were received from Alison Anthoine, Michael Bowman and Gretchen Dykstra. The HDRB had submitted a letter recommending the appointments of Bowman and Dykstra, but Falloon wanted to table the vote till next week so that he could speak with the three candidates about possibly joining another board (such as the Planning Board) with vacant seats that received no applications. Falloon mentioned there was yet another retirement from a board pending.

Cold Spring received only one proposal to provide municipal insurance for 2013-14, but Francisco explained that the sole bidder, Spain Agency, Inc., would continue to provide the New York Municipal Insurance Reciprocal (NYMIR) Risk Management Program to the village with an even lower premium than they currently have. The new plan would result in a 16 percent decrease in the premium, or $18,514 in savings to the village. Trustees voted unanimously to accept the proposal.

The Village Board will host its Emergency Preparedness Workshop on flooding at 7:30 p.m. Tuesday, June 4, in the Village Hall. The board will discuss the Local Waterfront Revitalization Plan (LWRP) at their workshop June 18 and parking on July 16.

One thought on “Preservation of The Grove Considered Anew”