In his opening remarks at last Friday night’s Hello Depot benefit at The Garrison, Depot Theatre Board President Steve Ives asked the attendees to conjure up the stereotype of a local theater: bad seats, amateurish sets, terrible productions of Our Town, etc. He then asked them to “think about the kinds of performances audiences have experienced over the past couple of years at the Depot, mentioning a handful including the drama Prisoners, last fall’s The Beggar’s Opera, Depot Docs screenings and uplifting youth theater shows like Oliver! and the Musical Mystery Tour. While wryly noting that the bad-seats component of that description rang true, he nonetheless proclaimed, “This little theater rocks!” and added that “artistic vitality is one of the highest values; this is the little theater that could.” 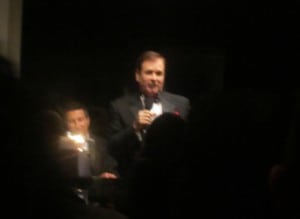 Broadway veteran Lee Roy Reams entertains the crowd at the Depot Theatre benefit May 31. Photo by A. Rooney

After explaining that 15 percent of the theater’s budget comes from the town while 85 percent comes from “people like you,” and that the town leases the Depot from the Garrison’s Landing Association at a below-market rent in exchange for “upkeep and improvements,” he ran down a necessary list of them, alluding to Hello Dolly lyrics and the evening’s theme, saying they needed to “get the Depot back where she belongs.” With a goal of $200,000 to do so, “thanks to the amazing generosity of the board and anonymous outside donors, $100,000 has already been raised — $50,000 given as a challenge grant between now and Labor Day.” The campaign has been dubbed Looking Swell.

Ives later introduced Broadway performer and cabaret singer Lee Roy Reams, twice associated with Hello Dolly, having performed in the original production, for which he received a Tony award and Drama Desk award nominations, and directed a more recent revival. Reams performed an upbeat set of Broadway tunes, highlighted by a first-time rendition of a Jerry Herman song cut from the original production of Hello Dolly, replaced by the famous “Before the Parade Passes By” and virtually never performed since. Called “Penny in My Pocket,” one snippet of the lyrics went, “That’s how I acquired a Gramercy address — that penny in my pocket is the secret of my success,” something the Depot Theatre is hoping will happen on a somewhat grander scale over the next few months with their Looking Swell campaign for the matching grant.