Their silhouettes along the skyline are as iconic as the Statue of Liberty or the Empire State Building and, to certain aesthetes, no less romantic. Ronnie Farley, a photographer living in Beacon, has had an ongoing love affair with New York City’s water towers since she first moved there in 1982, and has chronicled them ever since.

Beginning Saturday, June 8, the culmination of Farley’s work will be on display in a solo exhibition at Hudson Beach Glass Gallery. The show includes several of her oversized digital black-and-white and color photographs alongside smaller, gelatin silver prints and a grid of 55 small paintings. A soundscape of the city from recordings Farley made inside a tank in Brooklyn will emanate from an actual wooden tank that has been partially reconstructed and installed in the second-floor gallery. 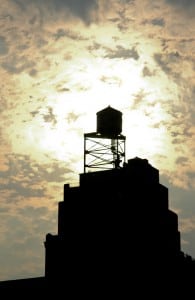 Water towers in New York City first came into use in the 1890s in response to new regulations by the Department of Health for the installation of “modern” plumbing. As urban housing proliferated (elevators were invented around the same time), tanks on the rooftops introduced a solution for getting water to people at higher levels, using gravity to provide water pressure. Today, almost every building in the city that uses water and has more than six floors has a water tower.

Abraham Isseks, a barrel maker originally from Bialystok, invented the modern-day water tank in the 1890s and started a business in New York City with his older brother, David. After Abraham died in a factory accident in 1896, his wife took over the business and David left to start his own company. About 70 years later, the Isseks reunited. Today, Isseks Brothers, Rosenwach Group (started by the Isseks’ foreman, Harris Rosenwach) and American Pipe & Tank carry on the tradition.

Farley considers water tanks a universal symbol of the utility of one of our greatest natural resources. “Artistically I think they’re beautiful, but what really piqued my interest in water was the photography work that I had been doing across the country, with Native Americans and ranchers,” she said. “Water is a huge issue for them. Traditionally, for native communities, it is a sacred element. Coming back to New York from these trips I would connect the dots, realizing just how fragile urban existence really is. In a city teeming with human life and activity, these tanks are the umbilical cord to our survival.”

Texts from her interviews with Native American women about water will be projected on the exterior of the tank in the gallery.

“For most of us, there’s no consciousness that water is the very essence of our life,” she continued. “Our consumption of technology parallels our consumption of water. The faster our technology increases, the faster we’re destroying the earth. I’m trying to make that connection in a very broad way with my work.”

A water tower in New York’s Chelsea neighborhood made headlines in May when artists ran an illegal nightclub, the Night Heron, inside a tank on top of a vacant building.

“What a brilliant idea!” Farley said. “Most New Yorkers have a warm and fuzzy feeling toward them, especially once they understand their function.” But it’s also a dangerous prospect; “tank men,” those who are responsible for building, tearing down and repairing the tanks, are often exposed to extreme weather and flying debris from nearby construction. “They are the city’s unsung heroes. Without them, there would be no city,” she said. 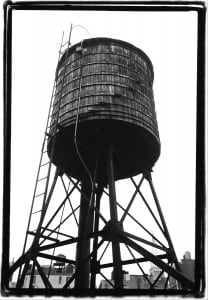 Ronnie Farley’s photographs have been published in Rolling Stone, USA Today, The Village Voice, New York Daily News, Sierra Magazine, Native Peoples and The Sunday Times of London. Her work has been exhibited throughout the U.S. and is in the permanent collections of the Museum of the City of New York, The Museum of the American Indian in New York City, the Rock and Roll Hall of Fame and Museum in Cleveland, The Nicolaysen Museum in Casper, Wyo., the National Cowgirl Museum and Hall of Fame in Fort Worth Texas and the Kultur Bodensee, in Salem, Germany.

There are two books of Farley’s photographs, Women of the Native Struggle: Portraits & Testimony of Native American Women (Crown) and Cowgirls: Contemporary Portraits of the American West, (Crown; reprinted by Thunder’s Mouth Press) and she is working on a third, New York Water Towers. She writes a blog at newyorkwatertowers.wordpress.com.

Hudson Beach Glass, 162 Main St. in Beacon, will hold an opening reception Saturday, June 8, from 6 to 9 p.m. The exhibition will be on view through Sunday, July 28. For more information, visit hudsonbeachglass.com or contact the gallery at 845-440-0068.