U.S. Sen. Kirsten Gillibrand (D-N.Y.) fittingly chose Boscobel, a Hudson Valley site that unites three predominant tourism bases of this region: natural beauty, historical significance and a center for the arts, to announce several initiatives designed to better secure federal funding directed toward and dedicated to protecting and promoting the entire Hudson River Valley National Heritage Area. At a June 7 press conference set up under a tent on Boscobel’s lawn overlooking the Hudson, with a large snapping turtle inadvertently but aptly part of the backdrop, Gillibrand was accompanied at the podium by Rep. Sean Patrick Maloney (D-Cold Spring) and Rep. Nita Lowey (D-Harrison) along with Mark Castiglione, acting executive director of the Hudson River Valley Greenway, and Simon Roosevelt, member of the Board of Directors of the Scenic Hudson Land Trust, all of whom made remarks. 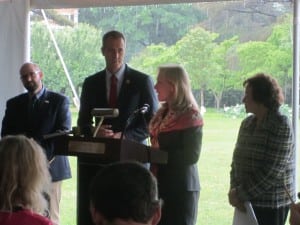 Backing up her bid to extend the recently expired designation of the region as a Hudson River Valley National Heritage (HRVNHA) area, Gillibrand said, “This land is very much part of America’s story.” First authorized in 1996, the designation enables the area — and over 100 individual sites within it — to apply for matching federal funding directed toward recreation and tourism projects. Gillibrand cited the enormous economic benefit that regional tourism can bring to local communities in the region, thus generating a proportionally equivalent supply of tax revenue, state, federal and local. These sentiments were echoed by Lowey, who called the area “not only a unique cultural and historical resource — it is a lynchpin of our region’s economy.”

Gillibrand also advocated for two other critical pieces of legislation, the first being the Lowey and Maloney  co-sponsored reauthorization of the Highlands Conservation Act in the House. Gillibrand is planning to introduce this same legislation in the Senate. Congress passed a bill in 2004 targeting conservation of a 3.7-million-acre, undeveloped, high-priority, conservation-value, wildlife-filled swath of land extending through parts of Pennsylvania, Connecticut, New Jersey and New York containing a clean water supply deemed crucial for over 20 million people. The original act authorized up to $100 million in land acquisition funding and $10 million in technical-assistance funding over 10 years; a further 10-year extension is sought. Similarly to the HRVNHA designation, this makes the region eligible for federal funding that is then matched by state, local and private coffers.

Additionally, Gillibrand introduced legislation to authorize the National Park Service to conduct a (required) study to determine whether the Hudson River Valley should become a unit of the National Park System. All counties lining the Hudson, down through the southern end of Westchester County, would be included in this geographical grouping. If so designated, Gillibrand said the region would benefit from “greater national attention, additional federal resources to support and preserve heritage sites, and increased regional tourism, all of which would contribute to job creation and economic growth.” Such a congressionally authorized study is mandated before any further legislation actually creating such designation can be put forward for a vote.

Lowey concurred, noting that this and the other bills they are introducing would “continue the successful partnership between the Hudson River Valley and our federal government, which supports thousands of jobs and local economies. We must lay the foundation for future investment and economic activity by making the Hudson River Valley part of our National Park System.” Referring to Boscobel and beyond, Lowey said, “The beauty of this magnificent place and the entire Hudson Valley served as inspiration for countless artists, writers and presidents. Our region shaped the founding of this country. Our bill is vital. This area is so very important for our future.” 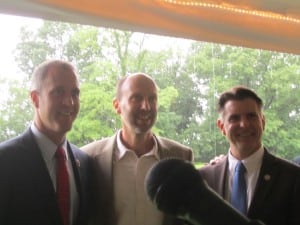 Maloney began by acknowledging his colleagues, saying, “I am inspired every day by Sen. Gillibrand; she’s such a great example of who you can be despite the pressures of the job.” Of Lowey, he said, “She has been so generous with me — and she’s in a position of real power in the appropriations committee. Having two leaders really helps us here in the Hudson Valley. So much history began right here, not just Revolutionary.” Quoting a Native American saying, “We don’t inherit the land from our ancestors; we borrow it from our children.” Maloney emphasized, “We’ve got to get this right. I will be your partner and we will live up to our responsibilities in the time that we’re given.”

Speaking in support of the reaffirmed HRVNHA designation, Castiglione called the Heritage Area a partnership of municipalities, elected officials and nonprofits, all in service of land protection. Scenic Hudson’s Roosevelt called the Hudson Conservation Area “conservation for the 21st century; it has all the necessary elements to be successful: it’s bipartisan, economically smart and realistic.”

Many local politicians attended the press conference. At the conclusion, Philipstown Town Supervisor Richard Shea told Philipstown.info that it was “great to get recognition from the federal level — it represents a grassroots effort to press for what’s important, and if it can lead to funding for local projects like the Fjord Trail, that’s a big plus. This event reaffirms what we all believe in: preserving the Hudson Valley.” Town of Philipstown Board Member Nancy Montgomery said she is “so happy about this initiative on a local level; it’s all positive.”

Asked for further thoughts by Philipstown.info, Maloney said it was “absolutely critical to preserve the Hudson Valley, and the legislation that we announced today is fundamental to that goal. It supports and extends the conservation of areas as economic engines as well as a source of beauty and pride for all of us. It’s important we work together to get it passed — important for all Americans, and for me, as it’s my home.” Calling the federal legislation “an umbrella over all our local efforts,” he named the Fjord Trail as emblematic of the type of local initiative that would fall under that umbrella, incorporating that three-pronged connective tissue of history, art and natural beauty.

Also attending were state Sen. Terry Gipson, Assemblywoman Sandy Galef, who thanked the senator for her “foresight and support of this area with her legislative initiative,” and Putnam County Tourism Director Libby Pataki, as well as the directors of many local cultural institutions, including Boscobel, Putnam History Museum, Garrison Art Center and the Hudson Valley Shakespeare Festival.