Nine young professional opera and classical singers will perform two free concerts, each entitled When the Heart Sings, Wednesday and Thursday, June 12 and 13, at the Chapel Restoration in Cold Spring. The concerts represent the culmination of a two-week, residential singing workshop taking place in Cold Spring, with participants in residence at the Hudson House, the staff likewise at the Pig Hill Inn, and daily workshops in the space at The Living Room. Use will also be made of the Chancery building at the Chapel Restoration and Gallery 66 NY. This is the second year of this immersion workshop; last year’s took place in Hudson. 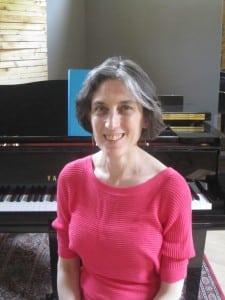 Deborah Carmichael (photo by A. Rooney)

The workshop is taught by Deborah Carmichael and Kinga Cserjési, licensed teachers of the Libero Canto Szamosi (TM) approach, which focuses on exploring the creative possibilities that arise from letting go and allowing the music to take over. Carmichael, artistic director of Il Cuore Canta, cited the famous 18th-century singing master Pier Francesco Tosi, “When the heart sings, you cannot dissemble.” The workshop was specifically designed for young classical singers who “wish for greater freedom of vocal expression, ease of vocal production, and deepening musical sensitivity,” according to workshop materials.

In describing Libero Canto, Carmichael was quick to clarify that it is not a method but an approach, i.e., it is not a repetition of set procedures but more a set of principles and attitudes, a philosophy almost, which students and teachers can absorb and then put to use in varying ways.

In a meeting a few hours before she welcomed participants, Carmichael related that Libero Canto was begun, circa World War II, by Hungarian Lajos Szamosi, a singer who wanted a career but was frustrated by something in his sound that bothered him, which he wanted to resolve. His observations of contemporary teaching methods led him to believe that certain traditional training enabled voices to get bigger but that the problem in the sound of these voices got bigger as well. He watched therapeutic sessions involving people with damaged vocal cords and mused that logically, if something proved helpful to damaged vocal cords, that same methodology could be applied to the functionality of undamaged voices.

Szamosi’s teachings were carried on by his children Edvin and Hedda, and it was through Edvin that Carmichael became exposed and then involved. She met him while living in Vienna; wishing to pursue acting, but having been told that her speaking voice was not strong, someone told her about this approach. She had a lesson and felt immediately at home.

“When I was a child, among my peers I sang well, but I lost the ability in high school,” she related. “I used to love to sing, and I thought studying singing would be a beautiful way to solve my [spoken voice] vocal problems.” Eventually, appreciating her affinity for the work, Szamosi asked Carmichael if she’d ever be interested in teaching, even without a career as a singer behind her, because she understood the process very well.

The essence of Libero Canto is, according to Carmichael, “letting go, releasing any excess effort and tension in the body, imagining the music more clearly and deeply and allowing the body to respond spontaneously to your musical imagination.” 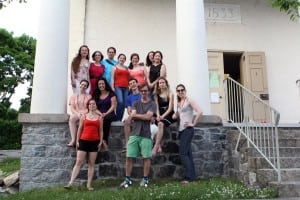 Students and staff of When the Heart Sings pose in front of the Chapel Restoration, where their performances will take place. (Photo by Jose Alvarez)

Carmichael said: “‘Breathing and giving voice’ are on the edge of voluntary/involuntary, but the deepest parts are involuntary, inborn capacities. There is a deep somatic knowledge about breathing and giving voice that is far below the level of conscious control, and it is impossible to control and command these things consciously and directly without interfering with spontaneity.” In the words of one student, “So maybe it is not necessary to know what to do so much as to know what not to do.”

The workshop will combine individual lessons taught by Carmichael (students are encouraged to watch and listen to each other) with guided-practice sessions taught by Cserjési, to help students integrate what they’ve learned and work independently with the approaches afterwards. Musical rehearsals led by Carmichael, with pianist/conductor Douglas Martin, fill every afternoon, with additional sessions in musical analysis and listening to historical recordings.

Students, some recent conservatory graduates and all young professionals, “auditioned” by taking a lesson in order to experience the work and decide if it was for them. In the lesson, they were urged “not to listen to your own voice and don’t care about sounding pretty,” by Carmichael, who noted “after 40 minutes of not listening, relaxing and imagining the music, most felt freer.” Students (seven sopranos, one mezzo and one bass-baritone) were sent a selection of ensemble pieces by Handel, Monteverdi and Gluck about two months in advance and were also asked to choose a solo. They were asked to learn all the music by heart.

From these works, Carmichael has wrought a “pastiche” with narration, which she will provide, and a simple set designed and built by Trenton Duerksen. Martin will accompany the singers. Carmichael anticipates that the performances will be “fun, joyful, something between a concert and an opera — all with no hierarchy, no stars, a sense of mutual supportiveness.”

Having discovered Cold Spring and the chapel on a visit years ago with friends who had a home in Garrison, Carmichael remembered it last year when planning her first long workshop. Unable to secure the space at the chapel then, she is pleased to finally bring Libero Canto to Cold Spring and looks forward to sharing the results of the workshop at the concerts, which take place at 7 p.m. June 12 and 13. Admission is free, and all are welcome, as are donations.