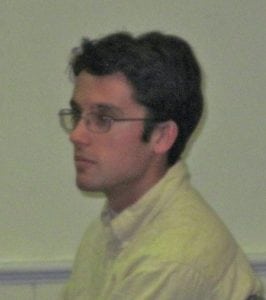 Roberto Muller of Cold Spring presented on a resolution on Indian Point at the June 6 Town Board meeting.
Photo by L. Powers

At the monthly meeting of the Philipstown Town Board Thursday, June 6, Roberto Muller of Cold Spring, a member of the Indian Point Safety Committee and the Hudson River Clearwater Sloop, Inc., presented on the dangers of an aged nuclear power plant sitting 10 miles away. While Muller stressed the importance of approving a resolution for a 50-mile evacuation radius, as did the Putnam County Legislature in April, the quiet but impassioned thrust of his presentation encouraged public and board scrutiny of the safety measures noted in the resolution that, in his opinion, must be implemented by Entergy Corp., the owners of Indian Point, in order to prevent a catastrophe.

County Legislator Barbara Scuccimarra, present at the meeting, offered to provide the Town Board with a copy of the county Legislature’s approved resolution, expressing hope that multiple municipal resolutions on Indian Point will make an impact in Albany. County Executive MaryEllen Odell had vetoed that resolution in April but was overridden by the Legislature in a vote May 22.

Muller said points in the resolution demand immediate attention by the board and Gov. Andrew Cuomo, including a call to extend the emergency evacuation zone around Indian Point from 10 to 50 miles, remedy flaws and deficiencies identified in a report by former FEMA Director James Lee Witt, establish full containment and independent backup electricity and cooling for spent fuel pools, store spent fuel rods in hardened dry cask storage, and upgrade the facility according to new seismological data.

Responding to the 50-mile evacuation radius aspect of the resolution, Town Board Member John Van Tassel bluntly predicted a no-way-out scenario in a nuclear disaster, as local roads would be choked with cars.

Topping off the board meeting was an animated dialogue initiated by Garrison resident Joe Regele that developed into a jousting match with Town Board Member Dave Merandy and, to a lesser degree, Supervisor Richard Shea, over why three fire chief trucks were needed by the Garrison Volunteer Fire Company when neighboring villages managed with one with taxpayer money being better spent hiring four to five new teachers or making needed town repairs. Another Garrison attendee, Stan Freilich, reported the fire company also has persistently failed to provide the town with a timely budget, offering only a list of yearly estimated expenditures. Shea and Tow Board Member Nancy Montgomery said a new fire company treasurer had been installed and a process of financial transparency and change had already begun – a point contested by Regele.