The Cold Spring Film Society (CSFS) put out feelers to those who attended one of their 2012 summer screenings at Dockside, and the feelers were felt, with audiences weighing in with what film they would most like to see in 2013. The funny thing is, though, there was no uniformity to the responses: Each and every one was different. “There seem to be millions of different film-watchers — from people who want the obscurities to blockbusters,” said Jen Zwarich, a CSFS founding member (and film professor). There were two trends, however; one was the wish for family-friendly films and the other … was for films for adults! 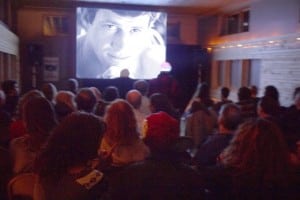 Last winter’s CSFS screening of Breathless at The Living Room

Seeking to please everybody in this third season of outdoor screenings, this year’s season of seven films taking place on six nights has both and in some cases, both on one evening. There will be early evening “family shorts,” geared for children aged 4 to 8 and designed to encourage parents to bring young children for a picnic and then opt to go or stay for a feature not specifically aimed at children. For example, a 30-minute compilation of award-winning shorts from the New York International Children’s Festival will precede the season-opening screening of All About Eve July 6. This pattern will repeat Aug. 3, before the feature showing of Back to the Future. On Aug. 17, in a Gallic pairing, the famous short French (but largely dialogue-free) classic The Red Balloon will be matched with The French Connection.

Zwarich called the CSFS “very excited about these additions to the program this year. The wider the swath of our community that enjoys these free outdoor films, the bigger our smiles become. That is the idea behind our programming for the summer series. We’re also looking to balance culturally significant movies with something fun that works outdoors.”

Things get underway with a splash with the June 22 unfurling of Jaws, the “movie that ushered in the summer blockbuster phenomenon,” said Zwarich, who added that of course it will be “fun to watch by the water.” As a little background, she said that the “film production was plagued by problems, a big one being that initially the shark didn’t work — so they relied more heavily on ‘point-of-view’ shots and that’s what made it so scary. The editing by Verna Fields essentially gives the shark a personality. And of course the score by John Williams, defines blockbuster.”

Having discovered through previous screenings that “witty repartee works well,” All About Eve will serve up plenty of that, along with dramatic heft when it is shown July 6. “A great Bette Davis vehicle — she defines the film — and a great date movie, too,” commented Zwarich, “it’s such a classic tale of ambition and betrayal.” 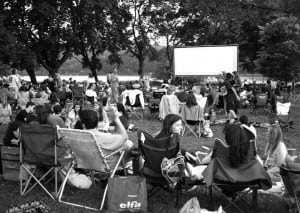 July 20 brings Arthur Penn’s Bonnie and Clyde, which was, according to Zwarich, “a watershed film; it broke taboos and introduced a kind of ‘new Hollywood’ which appealed to a hip, cool youth culture. Compared to today it isn’t all that violent or sexual, but you can see the beginnings of all that, plus it’s beautifully shot.”

Aug. 3 brings inclusive fun for young and beyond young with Back to the Future, and while the famous car chase (shot in Bensonhurst, Brooklyn) dominates memories of The French Connection, it is more than that, said Zwarich, calling it “a smart thriller.”

The season will conclude with a double bill of the animated feature The Secret of Nimh, the first film that director and producer Don Bluth made, in rebellion, after leaving Disney Studios, and The Big Lebowski, which Zwarich dubbed a “cult, ‘oh yeah’ thumbing-your-nose-at-the-man kind of film.”

The real kickoff to the season will take place indoors at a June 15 “casual cocktail party” at Skybaby Studios. Silent films will be projected onto the walls for ambiance, and the admission of $20 also buys a season membership in the CSFS (and the free popcorn at all screenings that goes along with such membership).

The CSFS is a 501(c)3 nonprofit, supported through tax-deductible donations, and their goal for this year is to cover the licensing costs. “Our business model is, ‘We think this is fun and good for the community, so if we can break even every year, that’s great,’” said Zwarich. They are fundraising specifically to upgrade the speaker system, which right now is dependent on a set of indoor speakers  operating at the highest range possible, so speakers designed for outdoors are more optimal. There are different levels of membership, beginning at $20, and details are available at the CSFS website. 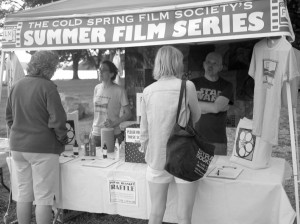 Outdoor moviegoers at the entry tent before last summer’s screening of The Birds.

Volunteers are also much sought after. The biggest need is for people to help with the takedown after each screening. This season, a group of Haldane students, gaining National Honor Society community service hours, will be helping out, and more are sought. “Anyone who wants to become involved is welcome to,” said Zwarich. The CSFS meets once or twice a month and all ideas are welcomed.

This past winter, the CSFS began a winter film series by screening the French new-wave classic Breathless to a full house at The Living Room. They didn’t expect the crowd and were pleasantly surprised to see the level of interest. They’ll be considering other films at that time of year with a particular eye toward those that don’t lend themselves to a summer series and/or wouldn’t necessarily draw a huge crowd. They are also trying to figure out a way to facilitate the inclusion of more local seniors, perhaps with some kind of indoor matinee screenings; ideas are welcomed.

For more details on the screenings, becoming a member and special events, visit coldspringfilm.org.