Wild strawberries popped up in our yard about the same time that cultivated strawberries began to show up at the farmers market. I hadn’t planted the former, so I was especially happy to see them simply appear here and there — by our front gate, on the hillside, under the lilac bush. I am always cheered by any sign that nature bestows upon us as much sweetness and benevolence as hostility, weeds and black flies. 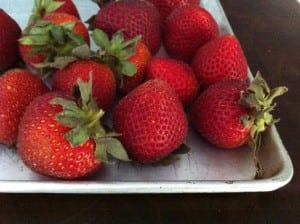 The berries looked utterly darling, like illustrations from one of those English storybooks about badgers and toads who live among the hedgerows, so I popped one in my mouth. What a shock! It had neither juice nor flavor. Indeed, it actually seemed to negate flavor and moisture, like a dentist’s vacuum. I spat it out, frightened that I had possibly eaten a toxic berry, and suddenly remembered all the admonitions that had once filled my childhood ears about not putting anything in my mouth whose edibility I wasn’t 100 percent certain of.

But the plant’s appearance was so very familiar. How could I have gone wrong? Back inside our house, I looked it up on the Internet, and it turns out that what I ate is called a woodland strawberry: a relative of the wild one that is not poisonous, just flavorless. But while it can’t make you physically ill, it can leave you feeling slightly sick with disappointment as your bucolic English garden fantasy comes crashing to the ground.

Fortunately, the farmers who sell strawberries at greenmarkets rely on something other than chance and elves to determine what will come up in their soil. They cultivate strawberries whose flavor is commensurate with their looks. Which is not to say that being a lookist is shallow when it comes to strawberries. In the fruit world, beauty matters — it’s a kind of botanical flirtation, designed to catch the eye of passing creatures. And we are programmed to notice. Since most plants are rooted to the ground and can’t move, some of them evolved to rely on mobile beings for the dispersal of their seeds. Birds, bears or slow-witted badgers like me amble by, spy the comely fruits and gobble them up. The seeds pass through our digestive systems and return to the soil, hopefully some distance from where they began. 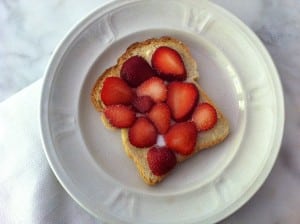 It’s a clever little system. So much so that certain people have decided to honor its genius by becoming fruitarians, on the belief that fruit is the only food that nature wants its creatures to eat. (Unless that creature happens to be Ashton Kutcher; he wound up in the hospital recently after eating nothing but fruit for a month. Nature evidently has other plans for him.)

Anyway, I admire people who live by their principles. But for me, it’s enough to remind myself that I am participating in nature’s brilliant design whenever I polish off a bit too much strawberry shortcake at dinnertime.

But before I can do that, I need to get my hands on some strawberries worth eating.

So the next time I’m at the farmers market, I buy three quarts. The berries are so ripe and heavy that their cardboard containers have started to slump outward. Back home, I transfer the berries to a baking sheet — spreading them out so they don’t squash one another in the fridge — but set aside a handful. It’s enough to make a quick strawberry sandwich, one of my favorite June treats. It consists of sugared, sliced strawberries on buttered toast, and it is excellent — the perfect food to eat outside, sitting at a shady table in my totally un-enchanted garden.

Lightly toast the bread and butter it while it is still warm. Lay the strawberries slices on its surface. Sprinkle with sugar. Wait a minute or two to allow the sugar to dissolve slightly, then eat.