The Haldane High School Class of 2013 Salutatorian is Simon Close. Close’s leadership skills include being a member of the National Honor Society, class vice president for his sophomore and junior years, captain of the junior varsity soccer team and vice president of the Environmental Club. Close achieved academic excellence by being on the principal’s list and receiving the PSAT Commended Scholar Award. He earned the Outstanding Male Vocalist Award for Chorus and an Academic Excellence Award for Biology. 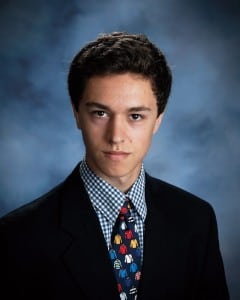 His drama talents included playing Teen Angel in Grease, Tony Abbott in Heaven Can Wait and Sky Masterson in Guys and Dolls. Close participated in the Depot Theatre Summer Drama Program. Simon played the bass clarinet in the band and enjoys tennis and playing the piano.

Simon will be attending Bowdoin College. He stated, “Garrison kids have a choice to make after graduation: Haldane, O’Neill or private school. I could have gotten everything I needed at O’Neill and everything I thought I needed at private school. But only Haldane could give me everything I really wanted. Haldane was just right in a Three Bears sort of way. Haldane afforded me many opportunities that I might not have had at a larger school. When I talk to friends about their experiences at other schools or I see the valedictorian of another school meet his superintendent for the first time a few weeks before graduation, I am reminded of the uncommon intimacy and sense of community between faculty and students that prevails at Haldane. Of the many great things I could say for Haldane, this is one of the most valuable, I think.”

Carolyn Schaefer is the Haldane High School Valedictorian for the class of 2013.

Schaefer is a member of the National Honor Society, the Haldane Academic Hall of Fame and has been listed as a Student of Excellence. She has earned Highest Average Awards for chemistry, English, algebra 2/trigonometry, global history, earth science, geometry and Spanish II and III. 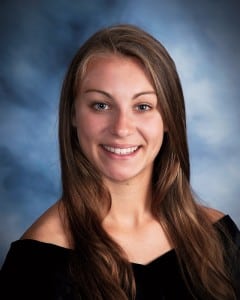 She showed her leadership skills as varsity soccer captain, International Club art editor and Bowling Club secretary. Schaefer was a program leader for Uniquely You, where she mentored fifth- and sixth-grade girls on self-esteem and the effect of media. She earned a Girl Scout Silver Award for community service through helping young girls learn about scouting. She is currently working on the Girl Scout Gold Award, which is the highest honor a Girl Scout can earn.

Schaefer was a member of the Haldane band and chorus. She was a NYSSMA flute soloist and a student instrumentalist for the Gandolf Murphy concerts for the Haldane School Foundation fundraisers. Sports-wise, Schaefer played varsity soccer and was on the varsity soccer all-league team, the varsity soccer all-section team and received the Scholar Athlete Team Award. She played winter/travel soccer for the Philipstown Soccer Club. Schaefer was a member of the Ski Club and studied ballet at the Hudson Valley Dance Studio. She also participated in the Leo Club, the International Club and the Environmental Club.

Schaefer involved herself in many volunteer activities, including the Little Stony Point Cleanup, Cold Spring by Candlelight Tour, the Peekskill Soup Kitchen and the American Cancer Society Relay for Life.

Schaefer will be attending the Massachusetts Institute of Technology in the fall to study engineering. She stated: “I feel so lucky to have grown up in a school like Haldane. There’s something so unbelievably special about it. Some will say it’s the small size or the incredible setting, but I think it’s the people. The people at Haldane are genuine, unique and just simply wonderful in so many ways. It is truly an honor to consider them part of my life.”