“You know two words I’d be happy to never hear again? Kale. Salad,” so announced the food stylist at a photo shoot I oversaw several months ago. She is highly respected in the food world, and although she didn’t look up from her cutting board when she spoke, it was clear that she was addressing the few of us who were hanging out near the kitchen trying to absorb her wisdom and food scraps. 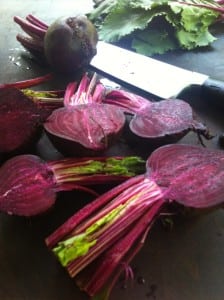 “Ri-ight?” agreed the prop guy. “It’s like sundried tomatoes or something. Sooo tired.”

“And pomegranate seeds?” the food stylist went on.

“Omigod, puh-lease,” said prop guy, rolling his eyes. “And can you believe all the things people turn into pesto?” They giggled madly.

I felt a social hot flash coming on — one of those dizzy moments when you realize that the thing your peers are making fun of is you. Suddenly your (by now malfunctioning) seventh-grade fight-or-flight mechanism starts pumping adrenaline into your system, having sensed that you are that close to being labeled a loser.

See, I make pesto all the time; Dosi adores it and so do I. I think good sundried tomatoes have their place in a kitchen. And kale in all forms, including salad, has simply become a part of our lives. Hating it at this point would be like hating “lettuce salad” or “bread sandwiches.”

True, the fetishizing of kale did get a little out of hand last year. In Vermont, where I was cooking at a summer camp (and will be again soon), every other car had an “EAT MORE KALE” bumper sticker stuck to its cockeyed bumper and T-shirts bore similar slogans. 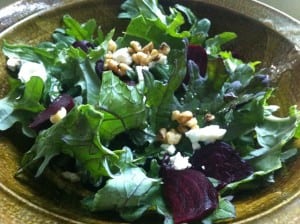 I admit: It annoyed me. I don’t find the act of eating kale controversial enough to warrant taking a stand for it, or against it, for that matter. Kale is not an ideology. It is a leafy green vegetable that tastes great and contains intense amounts of vitamins C, A and K.

Indeed, it may have been all the vitamin K I’d been eating that fuelled the Popeye-like feat of social daring that happened next. I cleared my throat, flexed my self-confidence and told my colleagues (as politely as possible) that I hated the idea that it should suddenly be uncool to like some food that’s gone out of style. I mean, this is food we’re talking about, not fashion, I said. Food is about nourishment, sustenance, family, history. It’s fundamental to our lives and our happiness. And it’s ancient. People in Genoa have made pesto for centuries. Who are we to suddenly decide we’re too hip to eat it?

I shut my mouth then, wondering if I’d said too much.

Not a hint from my colleagues, who may have been distracted by the big LOSER label that was attaching itself to my name in their heads. Anyway, just then the photographer called us over to weigh in on a shot and the rest of the day passed pleasantly enough.

For many months after that, I would hear that food stylist’s voice echoing in my head every time I made a kale salad. Finally, I went to a party hosted by a great chef and cookbook author and guess what was on the table? Kale salad. Two great big bowls of it. It was delicious.

Better yet, not long ago I ran into the food stylist and we got to talking about (what else?) food. Out of the blue, she mentioned that she’d thinking that it was high time to revive sundried tomatoes. “I mean, just because they’re out of fashion doesn’t mean they’re not good,” she said to me.

I didn’t tell her what I was thinking, which was that they’d probably taste great in a kale salad.

Walnut oil makes this salad extra delicious, but you can use olive oil instead. If you find raw kale tough, you can dress the leaves with olive oil and salt about 30 minutes before you plan to eat; they will cause the kale to wilt and soften further.