Incisors off my eggplant, flea beetle!

Something is eating my eggplant. The leaves look like they’ve been hit by buckshot. An insect found at the scene of the crime, a small black hard-shelled bug that looks like a bird dropping, may or may not be the culprit, but I’ll start there, anyway. 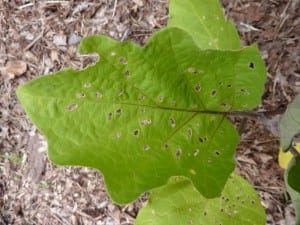 It’s tempting to reach for a can of poison to take revenge on the little buggers that attack our plants, but being a responsible gardener and trained enough to know better, I must pause and follow certain steps. Integrated Pest Management (IPM) is a concept widely used around the world to describe a broad approach to controlling pests using cultural and biological methods, developed by entomologists as a response to the rising use of synthetic pesticides in the middle part of the century.

IPM is intended to “reduce the risk to the environment and human health” according to my Cornell Cooperative Extension guide. When it comes to insects, the first step is to identify and learn about their habits. In this case, I can reasonably assert that my eggplant’s enemy is a flea beetle, probably a tobacco flea beetle, according to the Colorado State University Extension’s website, which has good photos and a list of the most common flea beetles and their desired plants. I’m itching just from the results of my Google search. 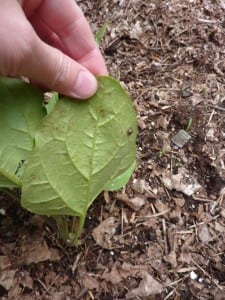 Now that I knew what was causing the damage, I had to learn its habits and behavior. This matters because even though an insect is damaging a plant, it might not be a pest. Just about everything we find in nature has a purpose. Most insects are not pests and some are beneficial.

Nature has a way of providing and using a pesticide to indiscriminately knock out every insect in the garden will kill the good as well as the bad, not to mention leave a residue behind on the parts of plants that are edible and desirable. They overwinter in the garden and I had problems with them last summer, too.

Even though I rotated all my other vegetables into new beds this year, I put the eggplant back in the same bed. That misstep is contributing to my problem now. Those flea beetles woke up this spring and I gave them a meal. Lesson learned.

Flea beetles can damage young seedlings, but might not harm mature plants. At this point, the leaves of the eggplant are suffering enough damage that they might not produce. I have to do something.

To control flea beetles, I can handpick them. I’ve only got three plants, so this is feasible, if gross. I’ve been doing this for a couple of weeks and still find more bugs and more damage daily so it isn’t working. Row covers are another way to control for them. Basically, the plants are covered and the flea beetles can’t get in. Since my flea beetles are already here, maybe next year I can preemptively keep them away.

Radishes and Brussels sprouts can be used as companion plants to draw fire from the eggplant. This is called a “trap crop” and the flea beetles will attack them, instead. I don’t have any sacrificial vegetables at the moment, either, but again, something to consider for smarter planting in 2014. These are considered cultural options.

Chemical options include diatomaceous earth, like the stuff that goes in the pool filter, but made for garden application. It can be dusted on the leaves and acts as a repellent for flea beetles. Neem oil and horticultural oil have some effectiveness and can be used in organic gardening. A pesticide, even one that is considered “organic”, still can be toxic.

The product’s label should include both the pest and the plant, or else don’t use it. If it isn’t there, it means that the product isn’t considered safe or effective for that particular combination. Time to harvest indicates the length of time before residue wears off so it’s safe to consume the fruit, even with natural or organic pesticides.

I’ve got neem oil on hand from fending off aphids on the viburnum so I’m going to try that. Exploring options for dealing with pests isn’t as easy as reaching for a can of Raid, but taking a “do less harm” approach does open up new learning experiences. Flea beetles are so named because of their jumping prowess. Flea beetle Olympics, anyone?