The Haldane School Board meeting Tuesday, June 17, ended the board’s academic year with a discussion of graduation success, the fine-tuning of some pending projects, a brief discourse on future organization and an appreciative sendoff to Michael Junjulas, who presided over his last meeting as board president. 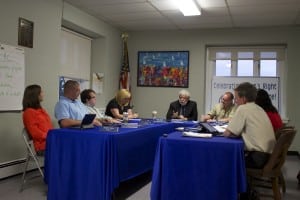 Meeting of the Haldane Board of Education June 18

“People don’t talk about the cohort graduation rate. It’s the four-year rate that gets reported,” Villanti said, referring to the success rate of students in the fifth and even sixth year of studies toward a diploma. “If we’re going to have higher standards, we have to recognize that all students will meet them in four years. Haldane’s rate in the fifth year of a cohort is 98 percent.”

Villanti also said he was skeptical about the growing use of an aspirational index that measures how well a high school prepares students for college by counting the number of student scoring 80 on English Regents exams and 75 on math. “We have to be guarded against the elitism of thinking that everyone is college-bound,” said Villanti pointing out that not all employment pursuits require college. “Our district did have the highest rate in the county,” he added.

Villanti also acknowledged that 100 percent of this year’s graduating class is college-bound, noting that many students were headed to Dutchess Community College, which, as a former guidance counselor, he thought just fine given the school’s “very good transfer program.” Junjulas also pointed out and others agreed that given the cost of four-year colleges, finding out one’s interest and capacity for the work at a community college might be a prudent course for many.

Offering a progress report, Villanti pronounced the long-awaited athletic field and locker room renovation project ready to go with work expected to have begun on the field Thursday with the locker rooms following soon. Completion of the work on the entire project is anticipated during the course of the summer. Villanti said he would likely offer the board and others a walkthrough of progress in mid-August. The $2 million project, which combines state, school district and privately raised funding, will upgrade the field, adding a new track, artificial turf, new football stands and better drainage, among other amenities. 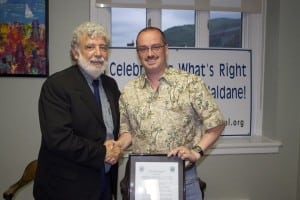 Superintendent Mark Villanti thanks outgoing Haldane Board President Michael Junjulas for his three-year term of service. The board presented Junjulas with a formal citation.

Trustee Jon Champlin, a leader in organizing the field project, also mentioned that memorial paving bricks that will be installed throughout the new athletic area were available for subscription by the public. Those interested can go to playhaldane.com for more information.

The board also moved forward on projects geared toward the introduction of green technology intended to both save money, broaden energy sources and offer students new appreciation of energy issues. The board approved a contract to provide solar energy with an elementary school rooftop installation that Villanti said guaranteed a 25 percent reduction in school energy costs. In addition, the board approved a bond to fund a $52,000 purchase of a new propane-powered van.

Villanti also mentioned that upgrades to Haldane’s security system were underway and that while they more modest compared to some schools the improvements allowed for growth. He pointedly said that discussion of the details of the security would undermine the intent.

In a brief discussion anticipating the board’s reorganization meeting on July 2, Trustee Gillian Thorpe, current vice president, indicated her intention to put herself forward for board president. Peter Henderson said he intended to offer himself for vice president of the five-member board. The two top officers of the volunteer board bear additional responsibility for meetings with the superintendent, staff and parents dealing with issues requiring attention between regular board and committee meetings.

At the July 2 meeting, newly elected member Jennifer Daly will replace Junjulas on the board.