Along with conservation easement, public access said to remain

The Open Space Institute and Scenic Hudson on Thursday, June 13, announced the sale of 129-acre Mystery Point in Garrison to a Michigan billionaire who pledged to retain public access to hiking trails and welcomed a conservation easement to protect the property in the future. 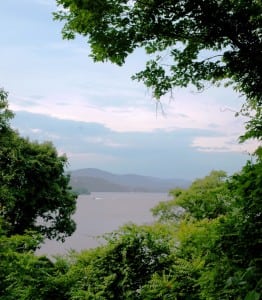 As twilight approaches, trees frame a view of the Hudson River at Mystery Point.

The $4-million-plus sale by the environmental organizations came as a group called the Being Institute — which itself wanted to acquire Mystery Point — mobilized Philipstown residents and circulated a petition expressing concerns that “this jewel on the Hudson will be closed off to the public and the mansion torn down in the hands of a pharmaceutical company owner.”

With a net worth of $1.3 billion as of March of this year, the 55-year-old Stryker ranks 360th on the Forbes Magazine list of 400 wealthiest Americans. According to Forbes, he is one of three heirs to a medical equipment company and has financially supported conservation of apes, gay rights, the re-election of President Barack Obama, and the Priorities USA Action political PAC, and founded the Arcus Center for Social Justice Leadership at Kalamazoo College, his alma mater.

OSI stated that Mystery Point was sold “subject to a conservation easement that permanently ensures that the property’s scenic and natural character is retained.” OSI said that the Hudson Highlands Land Trust will hold the easement and that “the parcel’s parking area and extensive network of public trails, including on-foot access to the Hudson River, will continue to be managed by the Open Space Institute and will remain largely unchanged and open to the public, with the exception of a 21-acre residential area.” 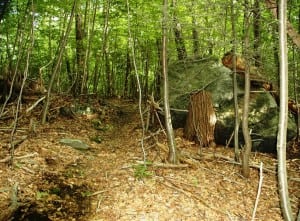 A trail winds through the woods beyond the Mystery Point visitor parking area.

Tally Blumberg, OSI’s senior vice president for programs, said Monday, June 17, that the Mystery Point site sold for $4.38 million. She said that the conservation easement restricts construction of other homes at Mystery Point but that the fate of the historic, circa-1890 Livingston house remained unclear. “We don’t know what the owner’s plans are for the house at the present time,” she said. “The conservation easement does not cover that building.”

In 1990, Mystery Point, also known as Manitou Point, passed to Scenic Hudson and OSI, and for a time the Outward Bound program leased the site.

More recently, the Being Institute, searching for a home, tried to raise money through its petition to secure Mystery Point for its own use.

OSI’s Blumberg said Mystery Point was on the market “more than three years” and that the Being Institute came forward rather late in the game as a potential buyer. “At that point, the transaction was under contract” with Stryker, she said.

In promoting the petition, the Being Institute reported “working night and day to secure the funds necessary to preserve the nature preserve and the Livingston Historical Mansion.” It added that “the Being Institute would preserve the land as a public space and restore the mansion to its turn-of-the-century beginnings while offering educational programs there in the art of moving meditation, music, dance, and observational nature studies.” The group described itself on its website as “a center for the study of the great ideals” that “offers recurring, simple, inspirational programs and ideas, meant to reawaken our natural, spiritual, inquisitive full self.” 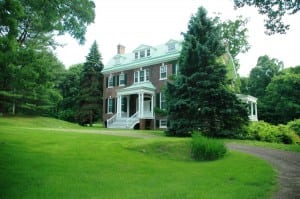 The old mansion stands in evening solitude at Mystery Point.

Supporters of the petition variously mentioned their love of berry-picking at Mystery Point, exasperation at a perceived “very hush-hush” sale process, and worries about closure of trails under a private owner.

However, the OSI news release quoted Stryker as saying that “I’m very excited that the new conservation easement we have put in place will ensure that Mystery Point will be protected and accessible forever.”

Philipstown resident Andrew Chmar, executive director of the Hudson Highlands Land Trust, told OSI his organization “is happy to play a part in the long-term protection of this property and supports the continued public access of this incredibly scenic Hudson River location.”

One thought on “Mystery Point Sold to Billionaire Philanthropist”