Sending a healthy plant or tree to the compost pile feels like murder, even if there is a sense of relief that the deed is done and whatever problem, aesthetic or otherwise, is resolved. I agonize, usually for months and sometimes years, over the decision to remove a plant or tree. Depending on the size and location, it’s either difficult and backbreaking work, or expensive, if professionals are involved. No matter what, a living, growing organism is no longer, and anything that enjoyed it or used it for survival has to find a new source. 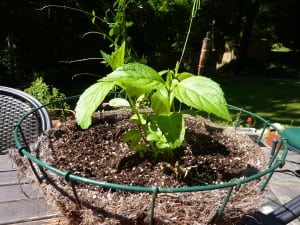 The invasive plants, though, I dance on their shredded remains, a sense of victory over reclaiming a small patch of ground for plants that belong and make positive contributions to the environment. Yes, gardening makes for harsh judgments.

To alleviate the collective guilt, I’ve spent some time considering the reasons to remove a plant or tree from the landscape. Most recently, a hydrangea had to go. For starters, there’s the aesthetic reason. Regardless of ruthless pruning, it came back in force and overwhelmed the space it occupied in front of the house, too big and too bulky. Turns out, this cultivar wasn’t even hardy for the climate and wasn’t going to bloom.

Each summer it gets one or two weak flowers, but that’s it. Living in the woods, there’s enough green stuff around. In order to occupy prime landscaping real estate in the yard, I want color. At roughly five by five feet, digging it out isn’t easy, and just in case I change my mind about it later, I took two pieces and potted them and also gave two other pieces to a neighbor who holds out hope for blooms.

When a plant or tree causes a health or safety risk, obviously removing it is justified. An arborist can help assess and identify issues. With the severity of recent storms, many homeowners are sentencing nearby trees to the chipper as a preventative measure. Just because a tree is within striking distance of a house or garage doesn’t mean it’s a threat, however. An arborist has criteria to judge the likelihood that a mature tree can be damaged by wind or rain and become a danger. It isn’t necessary to clear-cut our yards yet. 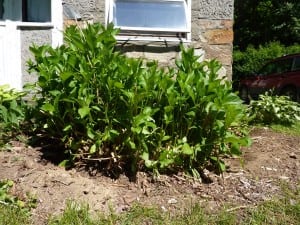 Almost halfway through the removal

Trees serve such an important purpose in the landscape, shading and cooling our homes, providing shelter and food for wildlife, that any decision to take one down should be carefully weighed. I’ve felt so terrible when the chainsaws start to rip that my only consolation is to try to balance the trees taken down with the trees planted. So far I’ve planted more than I’ve removed, but considering it takes 50-60 years for a maple to reach the height of some of the trees I’ve condemned, the ones I’ve planted won’t make up for it in my lifetime.

To address safety concerns about tall trees near structures, shorter trees like the native flowering dogwood, black cherry and witch-hazel all have a positive environmental contribution to wildlife and are aesthetically pleasing while maturing to less threatening heights.

Diseased and pest-infested plants and trees also need to be managed, sometimes by removal. Many of us love our hemlocks, but the majority of hemlocks in our area are infested by the woolly adelgid, an invasive insect that has been decimating the hemlock population across the country. Unless the hemlocks are treated, which needs to be professionally applied and can be costly, they’re going to die within a few years. I’ve talked to many gardeners who keep writing the checks to save their trees and feel conflicted over it.

Justifications for taking out a landscape plant are personal, of course, but researching its value and purpose can help guide decisions. Certainly, “I just don’t want it there” is a valid reason, however, and just maybe, your neighbor will come over and dig it up and take it home. Then your guilty conscience and sore back are both at ease.

One thought on “Roots and Shoots: When It’s OK to Kill a Plant”