If Patricia King had been able to solve the mystery of why she was not a published novelist during all the years she wanted to be, she might not have had the professional life she did enjoy for decades, as a world-traveling management development expert and CEO in the business world, and then as a non-fiction writer, turning that experience into grist for her five earliest books. Her cut-to-the-chase-titled Never Work For a Jerk and Monster Boss were the stuff of fact, not fiction. 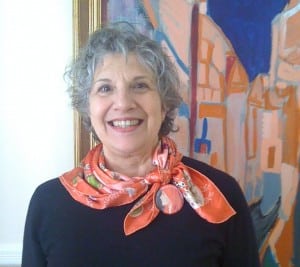 Handily, though, the puzzle evaporated with the publication of King’s first novel, a historical mystery, City of Silver, written under her nom de plume, Annamaria Alfieri, the idea for which stemmed from King’s fascination with South American history. “When I started to visit there, you’d see these incredible buildings, and I’d read the history, which I found so intriguing. Americans don’t know much about South American history — I didn’t. I vaguely knew the names da Gama and Bolivar but nothing else. I thought that most mystery readers like to learn something and thought if I did South American history it would give me a niche.”

The reasons for choosing “Annamaria Alfieri” as her author name for the mysteries were two-fold: “Patricia King is a very common name and I didn’t want my fiction, which comes from the heart, to be mistaken for someone else’s,” she said, adding, “I wanted something romantic, creative and distinctive.” Perhaps more importantly, it is a way of honoring her mother and her grandmother — the name combines both of theirs. Speaking to her own heritage in that way, “All my grandparents were born in Italy and I wanted to honor these women who didn’t have my educational opportunities; I’m standing on their shoulders.”

King, who “bangs out” a first draft, keeping a steady eye on the plotting (whodunit is figured out ahead of time), rewrites extensively, focusing more on the writing itself. “I find it fascinating to learn what the history really is, and then I invent a structured story in which the history can be woven through, so it fits together tightly and you don’t ‘notice’ the history,” she explained. She tries, through much investigative reading, to “amass enough information and have plenty of tidbits to drop in.” 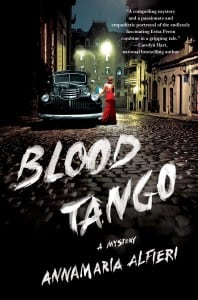 King, who, with her husband, David Clark, had a house in Garrison for 27 years before moving last year, will be reading from her latest novel, the about-to-be published Blood Tango, at Desmond-Fish Library on Saturday, June 29, at 2 p.m. Blood Tango takes place in 1945, on Juan Peron’s 50th birthday, when a momentous series of events over just nine days took him from a position of power to being deposed, followed by jail, then returning to power. “I imagined the death of a young woman who could be mistaken for Evita Peron and becomes her body double — and gets stabbed,” detailed King. Was she killed because she was mistaken for Evita, or for something else? Attempting to solve the crime are a police detective, a journalist and friends of the dead girl.

As in her previous works, the solution to this crime relies on the cooperation of a disparate group of people, working together. King feels that her former profession, where she worked frequently in team building and group dynamics, informs her plotting. She employed it most pointedly in her second work, Invisible Country, set in Paraguay, a country she first tuned into after hearing of a friend’s development and charity work there. He casually mentioned that the people in Paraguay were “still upset and angry about the 1868 War of the Triple Alliance — as if it happened yesterday. The devastation of the male population was such that the priests were going on the pulpit and preaching to women that they had to have babies — that it didn’t matter if they were married. That gave me my story.”

King left Garrison last year with regrets, after 27 years, first as a weekender and later as more than that. Initially drawn to the area by her husband’s memories of living at Glynwood Farm for a year and a half during his boyhood, when his parents worked there, after coming for a visit she was immediately taken with “how ideal it is: the ambiance, the beauty, all the things going on. Although it seems very rural, it’s such a culturally rich environment.”

King also built a relationship with the Hudson Valley Shakespeare Festival, which she “fell in love with during their second season. We became fast fans and that actually led to us becoming more hooked in with the community; before that we were weekenders.” Today she retains her association, as she is vice president of the festival’s board of directors.

King also relishes her association with the Mystery Writers of America, where she is finishing up her second and last year as president of the New York chapter. She became a member long before she was published in the genre, using the connections and inspiration found there to learn more about that writing style. When her first short story was published, she became an active member, and later she was asked to join the chapter board. “I’ve really enjoyed doing it,” she says, continuing, “it nurtured me and kept me going when I thought it was hopeless. They’re full of support and encouragement.”

King will read from her new book at the library’s author’s talk, with a wine and cheese reception afterward. It’s her third library appearance and she’s looking forward to being able to present her book to old friends and new readers “in a friendly, warm environment.” She will then be traveling to many of the mystery book stores still peppering the country, something she enjoys. “It’s great to meet the readers — heartening and encouraging. You write alone and hope people are going to get what you’re doing. By hearing their questions it gives you an idea of what makes things interesting to people.”

Asked if — despite it being located on rather the wrong side of the hemisphere of the Americas — she has ever considered setting a mystery in these here parts, King said that no novel was forthcoming but that she has been toying with an idea for a short story, especially if there were ever a volume of “Hudson Valley Noir”: a contemporary tale of shenanigans centered around that most inevitably “of Philipstown” subject: land use.