Hosted by Cold Spring Village, Thursday’s Independence Day Celebration in Philipstown promises to offer an eclectic range of activities from the solemn to the whimsical, with a parade, recognition of World War II veterans, five hours of music, kids’ events, food and, ultimately, fireworks to light up the night sky. 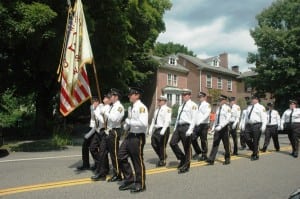 Firefighters in neat ranks participate in the 2012 parade. Photo by L.S. Armstrong

As in the past, the July 4 festivities will stretch over several hours and be centered at the waterfront and Dockside Park. The official kickoff is slated for 3 p.m. with the beginning of the parade, which will end near the Hudson River. There, nine World War II veterans will be honored at the bandstand.

Shortly afterward, dignitaries who participated in the parade will judge bicycles decorated by local youngsters, according to Cold Spring Village Trustee Bruce Campbell, ad hoc coordinator for the day. A concert program, featuring bands in a variety of musical styles, will follow at Dockside Park at 4 p.m., sponsored by Philipstown.info and its print weekly, The Paper, and assisted by the new Paramount Hudson ValleyTheater in Peekskill.

To reduce traffic confusion and potential hazards this year, the parade will avoid Route 9D (Chestnut Street-Morris Avenue). Instead of gathering by the Chestnut Ridge apartments, parade participants will convene at the intersection of Haldane and High Streets, near McConville Park. The parade will then proceed south on High Street, turn right onto Main Street, and wend its way down to the waterfront.

“I think it’s going to work better this year. We just hope they’re not right on top of each other,” Campbell said of the marchers. And “for most of the older participants, it makes it a little easier,” especially those who intend to walk the whole route, he added.

With a little more than a week to go before the parade, he said the lineup of those confirmed or expected to participate included veterans, among them the elderly men being honored for their roles in World War II; a delegation from the Hudson Valley Shakespeare Festival; Philipstown’s four fire departments — Cold Spring Fire Company No. 1, Continental Village Fire Department, Garrison Volunteer Fire Company and North Highlands Fire Department; the Philipstown and Garrison Volunteer Ambulance Corps; the Hudson Highlands Pipe Band; kids and their decorated bicycles; Scouts; the Garrison Arts Center; Knights of Columbus; the Philipstown Town Board; the Cold Spring Village Board and, perhaps, members of Cold Spring advisory boards.

“They’ve all been invited. It’s good to get the recognition. Sometimes you don’t get enough, especially on these boards when you volunteer your time,” Campbell said of the advisory board members. Special dignitaries who had confirmed participation by June 26 were Rep. Sean Patrick Maloney, the Democrat who represents Philipstown and other parts of the mid-Hudson Valley in the House of Representatives, and Putnam County Executive MaryEllen Odell, a Republican.

Convertibles and the trolley will transport those, such as older participants, who cannot walk the route.

After the parade reaches the Hudson River, World War II veterans will be specifically honored (with most in attendance) in a ceremony that will also mention the contributions of all military veterans. As part of the program, Tom Valentine will read the Declaration of Independence. The World War II veterans to be honored and the capacities or areas in which they served are as follows, in alphabetical order:

Two flag-bearers, Navy veterans Barbara Alcedo and Carolyn Roper, and two gun-bearers, Vietnam veterans Tony Sexton of the Marines and Steve Merando of the Navy, will constitute the color guard. Moreover, although not singled out in quite the same way the World War II honorees will be, other veterans will also be recognized, according to Campbell. 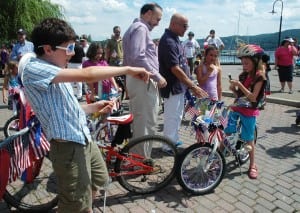 Culmination of the bicycle decorating contest in 2011 celebrations  Photo by L.S. Armstrong

Kids will again get a chance to show off their artistry and industry by decorating and riding their bicycles in the parade. Campbell said the contestants will decorate the bikes at home and then bring them to the parade staging ground before the parade begins. After the parade and the veterans’ ceremony, the contest judging will get underway.

Bands and musical groups will provide entertainment in styles ranging from early country and folk to vocals with guitar, drum, bass and harmonica; Hawaiian- and blues-inspired; and progressive rock, starting at 4 p.m. and continuing until approximately 9 p.m.

“All the music is at Dockside,” Campbell confirmed. Groups scheduled to take part, in order of appearance, are Exit Through the Gift Shop; Gillian’s Island; Raquel Vidal & The Monday Men; Tiki Daddy; and Professor Louie and the Crowmatix, featuring John Platania.

The day will also feature opportunities to eat and join in fun and games, at Dockside. Campbell’s roster of vendors and games, as of June 26, included:

Campbell said that the fireworks will begin at Dockside Park between 9 and 9:30 p.m., depending on when it becomes dark. They are sponsored by the Putnam County News & Recorder.