Tom McCoy, music director and pianist at the First Presbyterian Church of Philipstown, joins clarinetist Gareth Guest for Jazz Progressions, which will sample nearly a half-century of jazz-inspired compositions from greats like George Gershwin and Aaron Copland. The show will play one night only, Wednesday, July 3, at 7 p.m. at the First Presbyterian Church, 10 Academy St. in Cold Spring, and is free to the public. No reservations are required; first come, first seated. 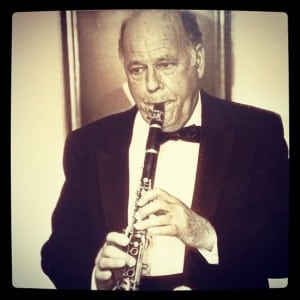 Guest is a recent Nelsonville transplant, having moved from San Diego to be closer to family; his daughter, Cold Spring-based actress Maia Guest, lives just blocks away with her husband and sons. Guest has played jazz and swing in big bands since he was a young man growing up in Pensacola, Fla. Alongside his career as a theoretical physicist and college professor, Guest has always found bands and concert work to keep his horns busy. In recent years, he has performed regularly at the Greencastle Summer Music Festival in Indiana.

McCoy is a pianist, composer, arranger and educator, active in the worlds of jazz, classical, rock and contemporary pop. In concert, he has accompanied James Taylor, Ray Charles, Natalie Merchant and Judy Collins, among many others. He concertizes extensively with Associated Solo Artists throughout the New York region as well as nationally and internationally. He is a principal pianist with the Hudson Valley Philharmonic and has performed several times as a guest with the United States Military Academy Concert Band at West Point.

McCoy has served as an adjunct professor at SUNY New Paltz, Mount Saint Mary’s College and Dutchess Community College. McCoy is well known locally from the Jazz Vespers he leads at First Presbyterian and from music-directing dozens of productions at the Philipstown Depot Theater, including Battle of the Orphans, by Brian McConnache, for which he contributed the original score.

Jazz Progressions features compositions covering much of the 20th century, beginning with Gershwin’s Three Preludes, first performed by the composer himself at New York’s Roosevelt Hotel in 1926, and taking listeners through the ensuing 49 years to Jimmy Rowles’ The Peacocks from 1975. Other pieces will include Pocket Size Sonata by blind Welsh composer Alec Templeton and Concerto for Clarinet by American great Aaron Copland, a piece originally commissioned by the “King of Swing” himself, Benny Goodman, in 1947.