Village Board rescinds May 7 resolution

The Cold Spring Planning Board met Wednesday, June 26, to discuss two main issues: their decision to become lead agency on the Butterfield project and the appointment by the Village Board of Trustees of a fifth member to the Planning Board, sole applicant Anne Impellizzeri, who is also vice chair of the Special Board for a Comprehensive Plan.

The Village Board voted at its meeting the same night to rescind its resolution to become lead agency and allow the Planning Board to take on that role, as well as to appoint Impellizzeri to that board. 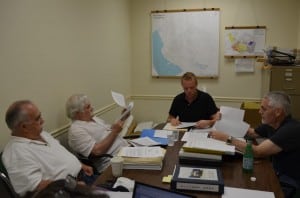 Planning Board Chair Jimmy Zuehl read aloud an email from Village Attorney Steve Gaba, detailing the process of determining lead agency on the development project proposed by Paul Guillaro of Butterfield Realty LLC, who plans to create a complex of housing for retiree-age residents, intergovernmental offices and retail businesses at the site of the old Butterfield Hospital, for which plans have been withdrawn and revised at least twice during the past year.

Gaba’s email indicated that once a board rescinds its lead-agency resolution, the board interested in becoming lead agency would then declare its intent, which the Planning Board plans to do at a newly scheduled workshop at 6:45 p.m. Wednesday, July 3.

The Village Board had resolved at a meeting May 7 to declare its intent to become lead agency on the project, first to change the zoning of the property to allow for proposed uses prohibited under current B4 zoning and secondly to usher the project through the reviews required by the State Environmental Quality Review Act (SEQRA). They had 30 days to circulate the notice, during which time other interested agencies could express interest in becoming lead agency.

When the Planning Board declares its intent to become lead agency, it will have to circulate the notice and wait another 30 days, unless it can obtain letters from the other agencies that they are not interested in taking that role.

Along with other village appointive boards, the Planning Board had discussed its opinions on the Butterfield concept plan at the Village Board’s meeting June 18. Discussion at the June 26 meeting revealed members’ opinion that the developer seemed actually to prefer the Planning Board as lead agency, especially since its comments were more concise than those of the other boards, pertained more to the planning aspects of the plan, and generally approved of most of the revisions in the developer’s concept plan.

Recommendations by the Planning Board that were questioned by the developer were its request for GPS coordinates on the concept plan and to amplify parking so that it conforms with Village Code requirements. Zuehl said the developer believed the current concept plan was accurate enough not to require coordinates and indicated that the parking is sufficient according to SmartCode, which is recommended by the village’s Comprehensive Plan.

The problem with that, however, is the Comprehensive Plan has still not been incorporated into the Village Code, so the planned parking is not up to current requirements.

The election of a new chair of the Planning Board was postponed so that the vote could take place after Impellizzeri officially joined the board. Zuehl has been serving on an interim basis, due to scheduling demands.