Growing up in New Jersey, Patti Pelican and her brother Greg, close in age, moved into young adulthood sharing a love of music. This translated into forming a band called Shoreline, which played the beachside bars along the Jersey shore. 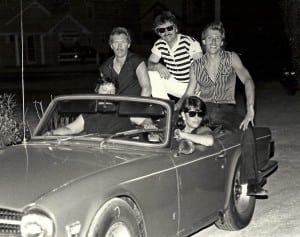 Time intervened, and after earning a bachelor of fine arts degree in acting at Rutgers’ Mason Gross School of the Arts, Patti spent a decade as a commercial actress, followed by motherhood — she has two teenage sons, certification as yoga teacher and, eventually, a new career as a health care consultant. She also co-founded and still performs with Philipstown’s MotherLode Trio, known for its vocal harmonies.

Meanwhile, Greg, once a well-known drummer and vocalist “steeped in the local Shore sound,” he said, became a nationally recognized cyclist and triathlete and, 14 years ago, became the owner of Bethel Cycles in Connecticut, whose specialty is road, tri- and high-end mountain bikes.

After a long hiatus from drumming, Greg and a fellow Bethel Cycles racer Paul Parton sat in with a blues band at the club’s Christmas party, jamming together “and had a blast,” said Greg. Parton, a seasoned guitarist turned advertising agency owner, had once upon a time played with many bands in Scotland and in London.

Greg explained: “I could tell Paul had talent and we were so excited to play again, the two of us started practicing at the bike shop on Sunday nights. Our chops came back quickly and we started looking for a bass player.” They quickly found professional bassist and vocalist Rich Diaz — whom Patti called “a human jukebox,” and chose the name The Derailleurs (pronounced De-railers) which, (according to wisegeek.com) is “the part of a bicycle’s drivetrain that moves the bicycle forward; this device moves the bicycle chain across the cogs in order to move it — or shift — to a higher or lower gear.” In other words, as Patti noted, “the hub in the spoke of the wheel on a bike, where the gears shift.” 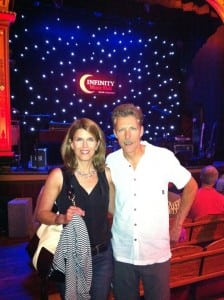 Sharing a love for ’80s music, the new group’s members were drawn to material that came out of the U.K. at that time, including tunes from The Clash, Elvis Costello, Squeeze, David Bowie and Joe Jackson, along with bands like The Pretenders and Blondie, which, though American, first found success in the U.K. Not neglecting stateside artists, they also perform material by Talking Heads, The Cars, The Romantics and The Smithereens.

Despite a break of 20-plus years, by March 1 they were ready to perform in public, and brother put in a call to sister to see if she’d come and provide some backup vocals for the occasion. Patti came to a rehearsal and “had so much fun that I jumped right in,” she recalled, and the band quickly became a foursome as she became a member.

The siblings are enjoying this new identity. “We have respect for each other’s taste and professionalism,” said Patti. “Even though it’s sort of corny, Greg will be doing a drum solo and I’ll just look over and smile. To be playing and singing together is kind of special.”

Now averaging a couple of shows a month, and with three full sets of music to draw upon, the band isn’t planning on performing original material — “I save that for MotherLode,” said Patti — and can pick up the chords and all else required quickly.

As for lyrics, now with the ability to look everything up online, Patti admitted, “I think I used to sing a lot of the wrong lyrics — it can be interesting to see what they really are!” Her favorite to perform in this incarnation is “Mystery Achievement” by The Pretenders, because “everybody gets a moment to solo.”

Patti is especially excited to be debuting The Derailleurs in Cold Spring, her home for over 17 years, at Whistling Willie’s, where the band will perform July 5 at 9:30 p.m., the later-than-usual hour because tables are being cleared to make room for the expected dancing. There is no cover charge.

Likely to be attending, along with Patti’s husband, Mike Heintzman, are their two sons, who have never seen her perform this sort of material. She’s looking forward to it but says there’ll be no ’80s hair or special attire to mark the occasion.