When Daniel Callahan and Willard Gaylin founded The Hastings Center in 1969, they hoped that people with differing perspectives would come together to explore emerging issues. Now, decades deep into their mission, the nonprofit research institute nestled off of 9D on Malcolm Gordon Road in Garrison, continues to keep the conversation moving. The independent nonpartisan organization involves the participation of a network of experts to address ethical issues in health, medicine, biomedical research and the environment relative to individuals, communities and greater societies.

President and Chief Executive Officer Mildred Solomon is drawing down on her first year in the primary leadership role at The Hastings Center, and notes communication and understanding as skills essential to success.

“A part for any new officer in a leadership role is to understand who the people are in the organization and get engaged with the programs,” Solomon said. “I spent the first two months getting to know everyone, and we had a series of retreats in the summer and fall to focus forward.” 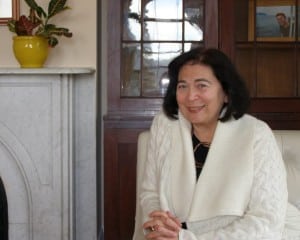 Mildred Solomon is President and Chief Executive Officer of The Hastings Center.

With a doctorate in educational research methods and adult learning from Harvard University, Solomon’s work as an established bioethicist and social science researcher has enabled her to make a smooth transition into her position at The Hastings Center, which includes directing a staff onsite in Garrison, and embraces an association of leading researchers named as Hastings Center Fellows.She continues to serve as a professor at Harvard Medical School and directs its Fellowship in Medical Ethics in the Division of Medical Ethics.

“We have close to 200 Hastings Center Fellows across the United States and around the globe,” Solomon said. “It’s a great honor to be named a fellow. We have resident scholars, and we can draw on this larger cohort of fellows to participate in work groups.”

Bioethics is interdisciplinary, and work groups can require expert researchers from many fields of study. When Callahan and Gaylin outlined their early mission, The Hastings Center was established with intentions to create a calm oasis where people with varying perspectives could come together and communicate with rationality.

The era represented a period of significant biomedical innovation, and the center’s founders believed there was a need to protect humans in research while still advancing science. As The Hastings Center continues to identify critical questions, resident scholars and fellows are researching areas from synthetic biology to genomic medicine and end-of-life care. 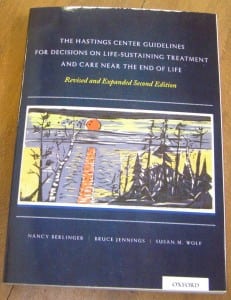 “One of our goals is to do scholarly research on morally and potentially controversial issues,” Solomon said. With a longtime center affiliation herself, Solomon’s scholarly research in ethical areas includes end-of-life care, organ donation, palliative care, comparative effectiveness research and the protection of human subjects. “The other aspect is to bring this information to the public square. We think educated citizens need to be a part of the conversation, and we’re committed to talking and speaking about these issues in ways that will draw them in.”

In its efforts to build knowledge and continue the conversation on the potentially controversial discussion concerning end-of-life care, the organization recently released a revised and expanded second edition of The Hastings Center Guidelines for Decisions on Life-Sustaining Treatment and Care Near the End of Life (by Nancy Berlinger, Bruce Jennings and Susan M. Wolf, Oxford University Press).

Published in 1987, the first edition is still relevant, but new issues have emerged, and the updated Guidelines address additional concerns including standards of care, individual rights and responsibilities of the health care community.

Solomon said that the first edition established itself as an encyclopedia of sorts for doctors and families in relation to critical decision-making ranging from life support to standards for pain management. Now, 26 years later, the second edition covers a wider range of information, including advance care planning, chronic illness, pediatric care and communication and collaboration. 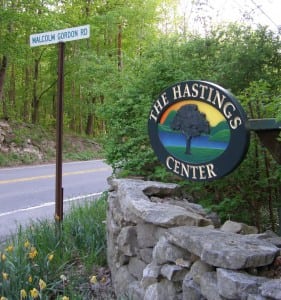 The Hastings Center makes its home in a pastoral setting off of 9D in Garrison.

“There’s been an enormous amount of work on the importance of holding family meetings and communicating,” Solomon said. “Our primary focus for this book is clinicians, but we want to share it with the public, for families to know what rights they have and what questions to ask.”

In addition to Guidelines, The Hastings Center publishes a high volume of scholarly literature. Public Affairs and Communications Manager Susan Gilbert said that the locally based nonprofit publishes journals and special reports, including The Hastings Center Report and IRB: Ethics and Human Research, for a wide readership including scholars, clinicians, lawyers, journalists and policymakers. And the organization finds no shortage of ethical challenges that need attention.

Erik Parens, a senior research scholar at The Hastings Center, has worked with the organization for 20 years. When people ask him to explain the organization’s purpose, he tells them the center was founded to think about ethical and social implications in science, technology and medicine.

“Everyone knows our lives are being transformed by science, technology and medicine,” Parens said. “We’re trying to determine to what extent we can harness them to do good rather than the alternative.”

Among his areas of specialty, Parens, who holds a doctorate from the Committee on Social Thought of the University of Chicago, studies emerging issues from surgery to genetics to nanoscience. In a special supplement to The Hastings Center Report published in 2004, Parens explored genetic differences and human identities. In trying to understand and discuss genetics and complex human behavior, a number of ethical questions arise. 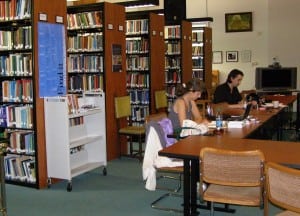 Researchers are continuing the discussion, and The Hastings Center will collaborate in a new initiative with Columbia University Medical Center, which has received the primary grant for the behavioral genetics study. Based on the ethical, legal and social issues (ELSI) surrounding genetic information, researchers continue to investigate unusual variants of genes known to be associated with identified behaviors.

“What we’ve discovered,” Parens said, “instead of finding the gene for depression for example, is that many genes are involved. Many, many genes are interacting with each other in a body in an individual in a social context. Genes matter enormously, but how genes get expressed depends on one’s environment.”

In-depth research projects that The Hastings Center pursues are funded in part by grants, but the climate for funding dollars remains competitive.

Solomon said that The Hastings Center is funded in part by the federal government, private foundations and individual donors.

“Funding for bioethics is challenging all across the country,” Solomon said. “The grant world is very competitive, and we succeed and depend on grants. There are also donors that are attracted who like to be engaged with critical thinking, and they support what we are doing.”

The research center moved from its original location in Hastings-on-Hudson to Briarcliff Manor before taking up residence in the current historic building it calls home in Garrison. The main building that the center occupies was built in 1854 to serve as the summer home of the William Moore family. Among other uses, the property housed a school for boys, The Malcolm Gordon School, before the Hastings Center acquired a long-term lease on the property.

The Hastings Center also includes two apartments used by visiting scholars who may stay two days to six weeks depending on research needs at the Robert S. Morison Library located on the grounds. In a given year, 35 to 40 scholars may visit the center, and in addition to their research, most present research topics or engage in discussions with resident scholars.

The library supports the research of visiting scholars, fellows and the center, and is available to the general public by appointment. Community groups may also request use of the center’s grounds overlooking the Hudson River.

Solomon has made a commitment to heighten awareness of the organization locally and globally. “We have three audiences,” Solomon said. “That includes scholars, policymakers and journalists, and then we have the general public. We’re a global organization that wants to be accessible to the community.”

Number of employees: Staff of 26