Haldane seventh-graders speak to what is most important to them

Seventh grade is one of those gnash-their-terrible-teeth, emerge-from-a-chrysalis kinds of pivotal years in the transition from kid to teenager. It can often be a time when the grip of conformity clamps down and turns off individualism. Therefore, it’s the perfect time, according to Kathy Curto and Danielle Gobbo, for Haldane’s This I Believe program, in which students spend multiple sessions shaping, honing and finally sharing a personal, expressive essay about something at their core. 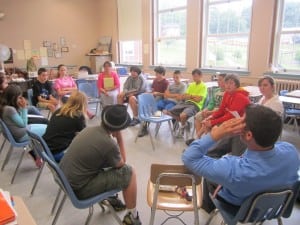 Haldane Principal Brent Harrington (back to camera, blue shirt) listens along with the class as writers share their essays.

Initiated by Curto, a Haldane parent, writer, social worker and professor, and now in its fourth year, the program is modeled after the popular National Public Radio show that, in its first go-round, began as Edward R. Murrow radio broadcasts in the 1950s, returning in 2005 to NPR where it maintained its popularity. There is now a This I Believe curriculum, devised by a nonprofit, thisIbelieve.org, to assist educators in bringing the program to classrooms. Notes from that program say, “The students learn about themselves and their peers and experience the delight of realizing their views and voices have value.”

Curto came to the program through her work in teaching sociology. “I gave this to my college freshmen and then thought how appropriate it would be for middle-school students. This is a very interesting time in someone’s life, thinking about things they value and why they value these things, ‘What is my core belief?’ Also, they have to craft a short piece (350 to 500 words), which packs a punch.” Curto, who has also done the program informally with senior citizens, calls it a “project that cuts across lines.”

Gobbo, Haldane’s seventh-grade English teacher, was new to the school this year and had not participated in the program before, but she was quick to embrace it. Her students were almost as receptive: “Their first reaction to personal writing is sometimes ‘no,’ but when Kathy came in and did such a stellar job explaining it, their reaction changed to ‘yes.’ She came in and really connected with them and made them feel they could do it.” 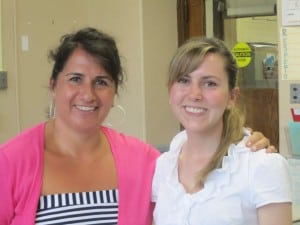 Gobbo said that the classes had just completed a fiction unit, and this afforded them an opportunity to “revisit that fiction, looking at themselves and their own lives.” She said it was a perfect end-of-the-school-year project, as “going into eighth grade, they now have that maturity level to be introspective. … We did a memoir writing unit at the beginning of the year, and there was such growth between then and now.”

Seventh-graders are “full of strong opinions — they’re opinionated in a great way,” Gobbo said. “It’s my hope that this will dust off what’s already there and have great meaning for them.” She pointed to a sign on her classroom wall thatemphatically states,“Your Words Matter.”

Between them, Gobbo and Curto essentially team-taught. Gobbo described Curto as “giving them the seeds, while I worked on some specifics: stretching a moment, editing, adding flavors. The kids benefited from two different perspectives. One of our goals was to get them out of their comfort zone.”

Curto started with the notion of “consider what your value is, and then think about a story in your life that helped you develop that kind of idea.”

After a number of workshop visits, draft after draft ensued, with the culminating activity the reading aloud of the essays to a circle of their classmates (along with Middle School Principal Brent Harrington, who stopped by for most of one session to listen). Each of the four classes gathered separately, with chairs arranged in a circle, to hear each other’s work and to comment on it constructively. No student was forced to read aloud, but even those hesitant at the start by and large decided — and in fact became eager — to share their essays after listening to their peers. 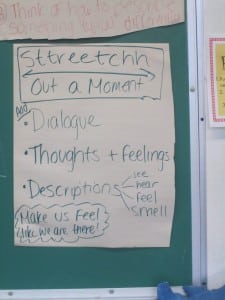 “The reading makes it all come together,” said Gobbo. Curto noted: “They’re not giving shallow comments, they’re really listening. This also teaches students the notion of audience: You’re writing for yourself but also making it accessible.”

Over the course of two of the sessions, core beliefs expressed were diverse and included cliff jumping; the effects of culture; being a Devils fan; “A Moment Saved Is a Moment Earned”; change; running; faith and trust; and comfort and safety (in the form of thunderstorms and roomy old sweatshirts). Some were anecdotal, others more like Op Ed pieces; all were heartfelt, not always in obvious ways.

That’s the way it often works, said Curto. “These are the cream that comes off the top. Maybe the topic is making a basket, but the basket is representative of other stuff going on. They’re talking about a lot, not just ‘that moment on the basketball court’ of whatever the subject appears to be.”

Both the beliefs and the literary expression of beliefs yielded many pearls:

On running: “There is hardly ever a time when your mind is blank and you can just go.”

On thunderstorms: “The sky turns the color of asphalt.”

The comments, from both the students and their teachers, were in many cases as telling and interesting as the essays themselves:

“You used so much symbolism; it helped with the understanding of it.”

“You’re a natural storyteller; you took risks; you engaged.”

“I love the vocabulary you used.”

“An example of a piece with a strong voice. You’re talking about big ideas in a way that’s very accessible.”

“You captured the pain and joy of what it means to be loyal to your team.”

“Your repetition was perfectly done. Sometimes first paragraphs are expendable, but we needed yours.”

“I believed you, and I was inspired. You used specifics and that strengthened the piece.”

“Instead of giving us a concept, you gave us concrete details.”

“Two words — pink and sparkles — summed up a whole world of experiences.”

“Between the rain and the tears, it’s very ‘wet’ in the right way — you texturized it well.”

“Having you as a student, it’s you on the page.”

“It had some jagged edges in the right way.”

Gobbo was quick to point out to a number of students,“You can see several drafts in your details.” Not much escapes her: “I saw you take the word ‘dry’ and alter it to ‘parched.’ Well done.”

A grant from the Haldane School Foundation will once again support a printed edition of all of the essays, to be distributed to all the participants, and hopes for the future are to possibly incorporate the filming or auditory recording of the students reading their pieces.

One thought on “This I Believe: Making Their Words Count”