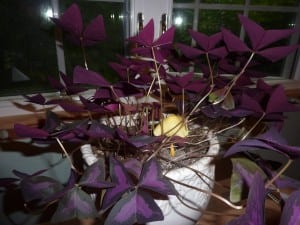 It’s OK. ’Shrooms can live in peace with your lily. I’ve got mushrooms growing in a houseplant, too. I found a helpful website about mushrooms from a University of Wisconsin professor that identified mushrooms that grow in houseplants as Leucocoprinus birnbaumii. The combination of dampness and rich, organic soil makes a ripe environment for mushrooms. While these aren’t the kind of mushrooms you want to put on your salad, neither are they harmful to people or plants.

The largest single recorded massive bee die-off was documented in Portland, Ore., recently. Shoppers at a Target store started noticing large quantities of dead and dying bees in the parking lot. An investigation showed that the linden trees surrounding the shopping center had been sprayed with a pesticide that was applied incorrectly.

The trees were in full bloom, attracting native pollinators. An investigation by the Oregon Department of Agriculture determined that the trees had been sprayed with dinotefuran, an insecticide. A local landscape company sprayed the trees in violation of the label’s instructions not to be used during blooming. Linden trees, which don’t have economic value like a crop, usually don’t need pesticide at all. State workers trimmed the flowers off all the trees to deter the threat to bees.

Oregon produces many crops and is especially known for blueberries and raspberries, which rely on wild pollinators. Although it’s difficult to measure the impact an incident like this will have on state agriculture, it’s a mistake with severe consequences that could have been prevented had the landscape company adhered to the label’s instructions.

It’s that time of year when it’s tempting to reach for pesticide to control annoying insects; just consider the options first and always read the label. If you can’t identify the insect, don’t spray it with anything until you know what it is. Then be sure that the pesticide lists your specific bug on the label and follow application directions carefully. There’s a threshold of pest damage before treatment is required for plants and trees, meaning that unless the health of the plant is threatened, it’s OK to leave it alone. A few chewed leaves hardly require treatment.

Part of gardening is learning about the plants and their particular needs. For example, a few holes in leaves on a viburnum might be the work of a caterpillar that will molt soon enough and no longer be a pest. If there are ants on the bush, though, and the underside of the leaves have bumps, the viburnum might need treatment for aphids that could cause deeper damage if left untreated. There’s a cost to the environment with every chemical we let loose.

One thought on “Roots and Shoots: Living in Peace With Mushrooms and Pests”