From the moment he began working at the Hudson Valley Shakespeare Festival (HVSF) back in 1998 and experienced the true meaning of the word atmospheric, as thunderstorms became a frequent nightly backdrop, Stephen Paul Johnson has always “thought we should do Lear. Not necessarily that it should be me playing him, but — now I’ve got enough gray in my beard to do it,” he said. This season, HVSF’s 27th, marks the company’s first foray into this giant of the Shakespearian canon, and accompanied by the requisite amount of “humility and trepidation,” Johnson is finding it “a joy.”

“Shakespeare was at the height of his powers, and he carries you along,” he said. “It’s so easy to trust him.” 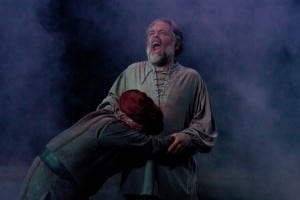 Written in the early 17th century, for the Globe’s chief tragedian, Richard Burbage, Lear was first performed in 1623. Thought to be based on a myth, the “legend of Leir,” a pre-Roman, Celtic king, the play has always produced extreme reactions. After the Restoration, the play was thought too savage and unfit for audiences of the day and was famously revised, given a happy ending, with father and loyal daughter surviving and a romance thrown in to boot.

In the 18th century, actor-manager David Garrick called it “the finest tragic distress seen on stage” and attempted to get it back to its original form, but a full return to the original text was not made until 1838. Through the years naysayers, amongst them essayist and Tales From Shakespeare author Charles Lamb, have thought it “essentially impossible to be represented on the stage” because of its soul-baring emotions and its representation of storms, literal and otherwise.

More so than many of his other characters, the demeanor, motivation and psychological state of King Lear have been questioned and debated for centuries now. With a myriad of choices, from feeble to bellowing, regal to infirm, Lear has always been one of those mountains to climb for actors and directors. A host of famous British names have made the attempt, including John Gielgud, Paul Scofield and Donald Wolfit, who claimed to down eight bottles of Guinness during each performance.

The first actor whom Johnson saw perform the role was the very American James Earl Jones, during a PBS Great Performances broadcast in the early ’70s, and Johnson said he sees nothing particularly British about the role. He had an opportunity to observe the undertaking of the role close-up in 1991, when he played Edgar in a Pacific Conservatory of the Performing Arts production of the play, something he feels has aided him tremendously in learning the text, which he has found “surprisingly easy — the familiarity from having done it before has really helped.” 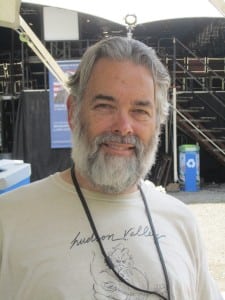 His preparation for the role began with a few off-season, private meetings with director Terry O’Brien, where they “got clear on what the meanings were.” Once in rehearsal, which went for about a month and a half in New York City before additional time onsite at Boscobel, the process became more collaborative, with the entire cast involved. Johnson researched and otherwise considered his role using the “Furness Variorum” of Lear, an annotated volume that “gathers together critical comments on every line from dozens of different critics from the Victorian age and earlier. Some of them are helpful, but ultimately you are left to your own understanding and collaboration with the director,” he said.

“I was very nervous approaching the role,” Johnson said. “Even his age is open to interpretation; there are conflicting lines about it in the text, but I thought, ‘Maybe I don’t have to go literal.’ I looked at available versions, from Ian McKellen, who played him as aged and feeble, to Ian Holm, who was quite vigorous, and thought, ‘If this really was prehistoric Britain, a man of my years would be old,’ and then relaxed about it. What’s important is the temperament of the man, the torment of the man and what he inflicts on others.

“Shakespeare succeeds in making him sympathetic, which, considering some of what he says, for example when he tells Cordelia, ‘Better thou hadst not been born than not to have pleased me better,’ is really cruel. But Shakespeare’s villains are always given justification in terms of how a person might choose this path due to their circumstances. For example with Shylock he gives ample examples of how badly Jews are treated. And, in this play, the way he [Lear] speaks to Goneril and Regan telling them he hopes they never have children, gives you an idea of how Goneril can behave towards him later on. He’s just so good about getting in the head of someone he’s writing. He had the most comprehensive soul of any playwright. He was able to give wonderful expression to so many — and in such rich and beautiful language.”

Johnson isn’t sitting around twiddling his thumbs on the nights when Lear isn’t being performed. Instead, despite the demands of Lear, he is also appearing as the dastardly Cardinal Richelieu in The Three Musketeers, directed by Chris Edwards. “Chris and Terry thought it might be too much, but for my own sake I thought it would be a wonderful change of pace. He has a lot to say and do, but it’s not physically taxing, and it’s actually quite refreshing. Also, it’s not Shakespeare, and sometimes it’s fun to put contemporary language in your mouth.” 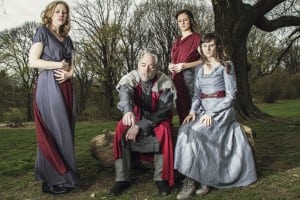 Between last summer and this one, he has been speaking language from different periods. Last fall he and HVSF regular Kurt Rhoads performed in The Rivalry, about the 1858 Lincoln/Douglas debates, at the Hudson Stage Works in Hudson, N.Y. “It was quite wordy, as the speeches are redactions from the original orations,” Johnson related. “I love history, and it was just meat and drink to dig into that,” he added.

Language of a different kind emanated from his mouth when he played “somebody they were collecting a debt from,” on Boardwalk Empire. “The guy who plays Gen. Zod in the current Superman (Michael Shannon) delivers a knuckle sandwich to me.”

Johnson loves the variety of the work. “Every year is different: voiceovers, on-camera work, theater — I love it all. That’s one of the great pleasures of the business: the variety.”

Still, he always comes back to the Bard, with this character as with so many others, only more so. “There are always depths to be plumbed. I grow in my understanding during the course of the run. The more you listen, the more you turn it over inside your imagination and realize what a genius Shakespeare was.”

One thought on “Finding the Joy in King Lear: Stephen Paul Johnson”