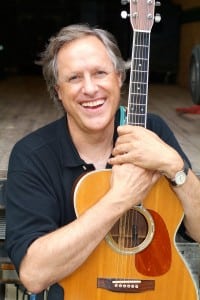 In a career with 23 albums and three Grammy awards, Chapin began performing professionally as a teenager in the early 1960s alongside his siblings Harry and Steve as The Chapin Brothers.

After launching a recording career and playing the lead role in the Broadway musical Pump Boys and Dinettes in the late ‘80s, Chapin branched out into family music with the album Family Tree.

“Writing family music has been a wonderful course in songwriting,” says Chapin. “Keep it understandable and fun for kids, but intelligent and musical enough to keep adults listening as well.”

At Friday’s concert, Chapin will perform with keyboardist Jon Cobert and percussionist Michael Mark. A songwriter as well, Cobert was part of last summer’s summer concerts at AotL in Cobert Operations.

The concert is scheduled for the lawn at the Lake Carmel Arts Center, 640 Route 52, Kent Lakes, NY, but will move indoors in the event of rain.

Admission to the concert is $10 at the entrance.

Offering major support for the series are the Putnam Hospital Center, the Friends of the Kent Library, Radovich & Dean Music, Kent Wine and Liquors, Macaroni Kid and Joan Iacono Law.

The concerts are also made possible, in part by the New York State Council on the Arts with the support of Governor Cuomo and the State Legislature and with public funds from Putnam County. These grant programs are managed and monitored by the Putnam Arts Council.

Local vendors will be on site at 6:30 to offer picnic–type food and beverages to enjoy before or during the concert.

Arts on the Lake asks spectators to bring a folding chair or blanket for the lawn.

The next two concerts in the series are Back to the Garden 1969 July 19 and Swamp Gumbo July 26.

More information on all events at Arts on the Lake is available at artsonthelake.org or 845-228-2685.