As I write this on Monday in a (suspected temporary) respite from the tropical heat of the last week, I feel like I should be working a little harder to entertain you with some blinding culinary creativity, but… nah!

The Fourth of July weekend is just too fresh in my memory and when C.B. (your regular columnist) asked me to fill in for the week, the thought of standing over a hot stove or even being in the proximity of a preheated oven was more than I could bear: I barely want to eat—much less cook.

This is a time for refreshment and what I really want is a tall, cold drink that doesn’t require a lot of effort on my part and that I can consume throughout the day without guilt or a cessation of all productive activity. My unrepentant epicurean self also demands an element of sensual wonder and celebration of the summer.

As an aside, in describing this column-in-progress to my spiritual-yet-aculinare doppelgänger, M.H., he demanded that whatever “recipe” I came up with had to be completed in less than an hour and with speedily replicated results.

Lemonade — tart+sweet+cool=refreshing — strikes me as a simple and forgiving place to begin and provides a simple platform to explore endless seasonal variations. So what I’d like to offer you is less a recipe and more a strategy to placate the aforementioned requirements. First a basic template:

Lemons, sure, but how about limes, oranges, grapefruit? (There is traditional Yankee precedent for another form of potable tartness: fruit shrubs are summer fruits — raspberries, strawberries, what have you — macerated in good quality vinegar for a couple of days, the mixture then strained and made into a simple syrup by the addition of an approximately equal amount of sugar, heated until the sugar is just dissolved. This is a great way of preserving the fleeting tastes of summer well into the colder seasons — I still have a small bottle of last year’s raspberry shrub in my refrigerator which, with a splash of soda over ice, makes a fine, refreshing drink in itself. For an even older take on it, look up oxymel, a purportedly medicinal drink from classical Greek times made of honey and vinegar. Recipes are available online and well worth exploring. Both also make terrific additions to more involved libations — including lemonade.)

This is where you can have some fun. Sugar is the expected sweetener, but the refined white variety has earned its BAD reputation and is also relatively boring from a taste standpoint. I immediately suggest substituting raw sugar (most commonly available as turbinado or demerara) as your first substitute. Honey or agave have their own strengths and particular sweetness and taste profiles, and are even healthier substitutions, but I say sugar for two reasons. First, by preparing a simple syrup (which admittedly does require a minimal amount of cooking) I can streamline the process: it mixes faster and easier; but secondly, it serves as a medium for incorporating delicate or distinctive herbal or spice flavorings which is where you really get to play with the recipe and take advantage of the season and indulge your imagination.

July is high season for a variety of delicate and ethereal herbs — mints of all varieties; basil in many guises; anise hyssop, for crissake; cilantro, even. Muddle a large handful of your herb of choice in the still-warm simple syrup for 10-15 minutes and strain. Likewise, hardier herbs — rosemary, thyme — can be used to great effect, as can spices — coriander seed or juniper berries (both of which can stand an overnight immersion before straining).

Should you want to use the healthier alternatives, proportionally adjust the sweet part of the formula: say ½ sugar syrup to ½ honey or agave. This will diminish the herbal impact but increase your personal virtue quotient.

With the above proportions, what you’ve created is a homemade lemonade concentrate. Say you’ve juiced one cup of lemons and limes and added 1½ cups of Thai basil syrup (just f’rinstance, mind you). Splash a couple of ounces of that mixture over cracked ice and top it off to taste with some fizzy water (although flat and bottled waters are certainly an option, this is where one of those Soda Stream fizzy water systems earns its keep) and remember more water means less sugar, so again, this is all to your taste.

The concentrate will keep nicely in a non-reactive bottle or pitcher in your refrigerator — let’s just say “for a while,” as it’s never lasted long enough around my house to go bad. (If you do want to keep it longer, it can be simply frozen or even put up like homemade jelly or jam, following the standard canning techniques.)

A syrup prepared from seasonal fruits — raspberries (red, black; even the local about-to-burst wild wineberries) or strawberries — is a sublime variation but requires more sugar (or other sweetener) to balance their inherent acidity. Simmer the roughly chopped fruit in the basic syrup solution for 10 minutes or so and let it sit overnight in the fridge before straining. (A bunch of rhubarb found in the Four Winds Farm stall at the Cold Spring Farmers’ Market last weekend led to strawberry-rhubarb lemonade with black peppermint, which I am still enjoying.)

But therein lies the real advantage to preparing a concentrate — you can make these free associations and changes according to your palate, on-the-fly, refining the results ad infinitum as the spirit moves you. 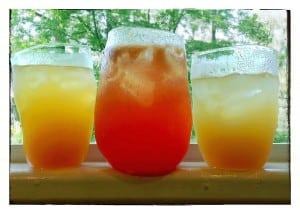 And again, as the spirit moves you, last minute changes or additions are welcomed — fresh ginger juice, ginger ale or artisanal tonic as opposed to plain fizzy water, a splash of custom aromatic bitters. (Drink More Good, at 259 Main St., Beacon, has a large selection. Proprietor Jason Schuler gifted me a sample of his soon-to-be marketed Orange-Anise Bitters which sent my Sicily-inspired rosemary-orange-limeade over the top.) Rum, vodka, gin or whiskey are not out of the question either, for adults after-hours, but please, imbibe responsibly.

The point is there are no rules, only thirst. Be your own scientist.