Addled parents of Philipstown now have an option to step out for a few hours, even if they haven’t lined up a babysitter, or simply if they wish for their child to enjoy a play space, filled with toys and activities, for a spell. ABC Soup, a new recreation space/drop-off center as well as a venue for birthday parties and language classes for all ages has opened at 290 Main St., Nelsonville, in what was formerly a florist’s shop. 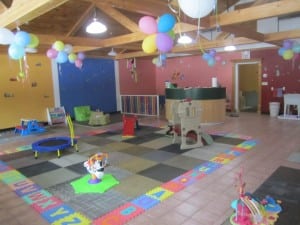 In the large front room, Eva Rojas, who runs ABC Soup, has established small centers, divided by colors for a variety of activities, including painting, pretend kitchen play, crafts and puzzles and a reading nook replete with comfy chairs. Not a daycare center, but instead a place where parents of pre-school aged children can be dropped off for an hour to several hours, ABC Soup will expand to include after-school homework help time later in the afternoon come fall.

Rojas opened ABC Soup less than a month ago, but has been devising and planning it for a year now. Born in Mexico, Rojas has been in the U.S. for 21 years. She lived in Peekskill for seven years, before heading to Florida for a year. Missing this area, she returned to Cold Spring nine years ago, seeking a good school district for her sons, two of whom were then elementary and high-school aged (her eldest recently received his master’s from Columbia University in computer science). 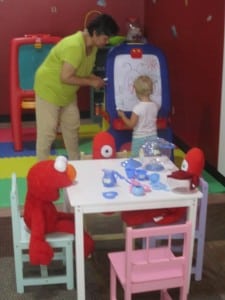 In Mexico Rojas ran a “papeleria” business — she likens it to an Office Max, while in the U.S. she has cared for children, among other jobs. She counts some of the many families whose children she has taken care of in Garrison and Cold Spring as some of her new clients now at ABC Soup. She chose the name because growing up in Mexico her mother, like many in Mexico, made soup every day. Rojas’s favorite was “the soup of the A-B-C’s” so the name just came to her.

Rojas ran her idea past the many moms she knew at the Tots’ Playground and in church, and they responded positively to the idea that if they wanted to go shopping or out for coffee or a medical appointment they could have a safe place to leave their child for a short duration of time.

Her philosophy on caring for children is that “you have to feel like a young child to understand them. For a short period of time, if you are playing with the child, don’t be an adult, giving orders, but be another kid, in that moment with them: think, feel, like him, don’t be afraid to be silly.” 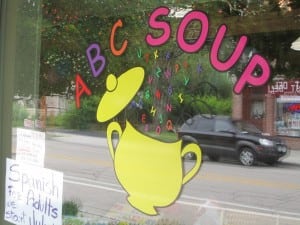 ABC Soup has opened on Main Street in Nelsonville.

Looking for the appropriate space took many months, with further time spent obtaining all the necessary permissions from Nelsonville and the county. Now she is up and running, juggling birthday parties, which can be arranged on either a “you bring everything in” or an “everything is provided” basis, with Spanish classes for children ages 4 to 6 and for adults, multiple levels and even Pilates classes, which will begin in August.