Claims of unfair and unethical response to project aired

Philipstown Town Board members informally agreed last week to intervene in the wind-turbine debate, to help resolve the 10-month-old controversy.

The issue involves James Gleick’s application, pending at the Zoning Board of Appeals, to construct a wind turbine on his 40-acre Garrison property as a power supply. The issue touches upon aspects of the town’s zoning code and its endorsement of alternative energy forms, fears of dead birds and environmentally unwholesome precedents, and claims of unethical conduct and confusion between small-scale wind energy systems and massive industrial wind farms. Gleick’s turbine would stand 152 feet tall, exceeding structural height restrictions by 112 feet, prompting him to seek first a variance from the ZBA and, more recently, a special permit. 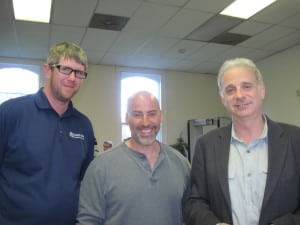 The Town Board met Thursday (July 11) for its formal monthly meeting, postponed a week because of the July Fourth holiday. Although its agenda did not include the wind turbine, the board entertained an ardent plea from Greta Passeri, from Hudson Valley Wind Energy LLC, the firm working with Gleick. Passeri, who referred to herself as “an agent and grant-writer for NYSERDA [New York State Energy Research Development Authority]” for Gleick’s project, described it as “a small, residential wind-power” system, as opposed to a commercial venture.

“I stress the word ‘small,’ for those who don’t have any understanding of wind as a renewable resource,” Passeri said. “Large-wind and small-wind [systems] are two very different constructions and should be treated so.” Gleick’s envisioned system “is supported by New York State funds and it’s supported by the federal government.” Under Philipstown’s zoning code, adopted in 2011, “wind turbines are an allowable use and should be treated as one,” she added. Nonetheless, she faulted the zoning for not drawing sufficient distinctions between small-scale and industrial-level wind power projects.

Overall, Passeri objected to the lengthy, still unfinished process of coming before the ZBA, characterized as “a lot of wasted paper, a lot of wasted money, and a lot of wasted time.” Similarly, she questioned the ZBA’s methods. “Due to questionable actions by the board, certain ZBA members have been out of line in their actions with large parts of the way the Philipstown zoning has been treated pertaining to  small-wind [projects],” she said, asserting that it is “totally inappropriate” to liken a small residential system to an industrial wind farm.

ZBA members also have repeatedly recommended that Gleick use solar energy, not wind power, Passeri said. “I find this is unethical by the board. Opinions should not be the focal point. The applicant has applied for a wind turbine and that is what should be addressed.”

At the same time, “we do appreciate the ZBA” and its commitment and thoroughness, she told the Town Board. Likewise, she acknowledged that at the onset her company and Gleick also failed to anticipate all the questions and requirements such an application demands.

Passeri also criticized some opponents of the project. “I’m a lot concerned with public comment. I strongly believe they have every right to comment and should comment. But they need to be accurate in the information,” she said. “The public has been allowed time and time again to make comparisons and even submit graphic photos of burning commercial turbines and dead birds killed by commercial turbines. This is not fair to our application.”

Both Supervisor Richard Shea and Town Board Member John Van Tassel, the Town Board liaison to the ZBA, expressed regrets about the turn of events.

“It’s painful to watch from the sideline when the process does not go well,” Shea said. “I apologize. I think we’re going through some growing pains here. We have a brand new [zoning] code” as well as a new form of energy to consider, he said. “That’s not an excuse. The intent of the new zoning was to streamline things and it was the intent to have the opportunity to have alternative energy in Philipstown. It’s an allowable use,” albeit one dependent upon a special permit, “which sets the bar higher. But it is an allowable use.”

He promised Passeri that as soon as possible the town government would convene a meeting of the various parties and thrash out procedural problems to expedite decision-making. “You do deserve to have a fair hearing.”

“It’s a new process for everybody. It’s not only the first wind [system] but the first special-use permit,” Van Tassel observed. “We are trying to coordinate it so you can get on the agenda and get something accomplished.”