Editor’s note: Garrison’s Aleta Wolfe will be exhibiting her work: Castle Keep: A Bee’s Eye View, starting Saturday, June 13 at Catalyst Gallery. The artist’s statement and press release for the show follow after this biographical note she supplied: 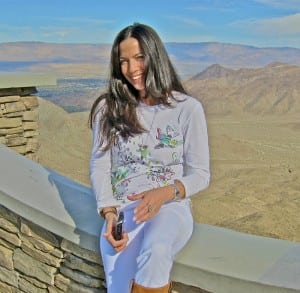 Aleta Wolfe, who will be exhibiting at Catalyst Gallery.

Wolfe took her first manual photography classes at Santa Barbara City College straight out of high school. Given the gift of a pre-owned Olympus OM 1 camera previously belonging to musician Joe Walsh, she never left home without it. That camera has been extensively around the world and rested in many an exotic locale.

While cameras have morphed into higher technological realms, the OM1 is still resting nearby and Wolfe is still taking photos — now with a Canon 5D Mark II. Born and raised in Southern California, via New York City, Brazil and Mexico City, Wolfe now resides in the woods atop a small mountain in the Hudson Valley with two loving dogs and a cat. Her young adult children are on their own exploration of life.

The beauty of decay is revealed in Aleta Wolfe’s solo show that uniquely examines architecture, preservation, conservation and the permanence-impermanence of home. The subjects of Wolfe’s oversized color prints are the abandoned beehives found inside Castle Rock, a local historical landmark.

“My intention is for the viewer to come to their own understanding of what I found – the symbiotic relationship between the castle and its architecture, the hives, wax, propolis, mortar, bees and geometry in nature. In these images the history and magic of the castle and hives have been brought back to life through nature’s timeless process, courtesy of the sun.” ~ Wolfe 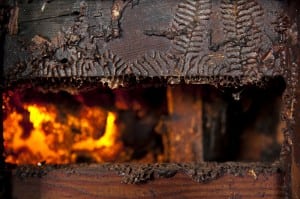 In 2012, Wolfe was granted permission to spend time inside the heavily guarded Castle Rock. She wandered alone through a maze of rooms and architectural wonders, dreamlike, while imagining past lives and events. Behind walls and ceilings that were torn down during renovations in 2006, she discovered the abandoned homes of a different species: bees. Noting how the natural light shifted throughout the day and the special ambience this created, Wolfe revisited the estate over a two-month period, often at “the most perfectly illuminated time, 6:30 to 8 p.m., as the sun moved across the hives until it was dark,” to photograph what she found within its “body.”

“The story begins last July on a grey rainy afternoon. Enjoying the opportunity to meander through a familiar castle under renovation, deep in thought through twisted stairwells, I contemplated and photographed. Until dusk I shot through a soft, diffused light. The walls had been removed to expose all beams including the ceilings giving a skeletal feeling.” ~ Wolfe

Wolfe is a longtime fan of bees and their environmental and healing benefits. The wax honeycombs in her photos are still partially composed, brought eerily back to life by late-afternoon sunlight. But like the estate itself, so lovingly designed and constructed, they are now void of earthly activity. 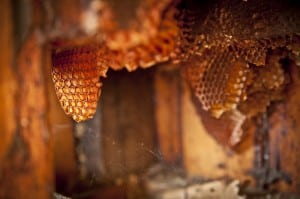 Castle Rock was built in Garrison, in 1881 for former Illinois Central Railroad president William H. Osborne and remained a family residence for nearly a century. Sitting at an elevation of 800 feet, the estate affords dramatic views of the entire Hudson Highlands landscape. Seen from below, with its truncated gables and dramatic round tower with a conical roof poking through the foliage, Castle Rock is a well-preserved symbol of a glorious, industrious past.

Castle Rock is currently under renovation. It is maintained and monitored year-round by an on-site caretaker. Access to the grounds and the building is forbidden without special permission.

There will be a closing reception on Sunday, July 28 from 4 to 6 p.m. Gallery hours are Saturdays and Sundays from noon to 6 p.m. and by appointment. For more information visit aletawolfephotography.net.

One thought on “Castle Keep: A Bee’s Eye View”