After a time accommodating little but ants, assorted old furnishings, and dust balls, Dahlia house could enter the ranks of public service.

Philipstown Town Board members Wednesday (July 10) night informally toured the small, empty Cedar Street structure and envisioned a brighter future for it, as an adjunct to Town Hall, its nearby neighbor. 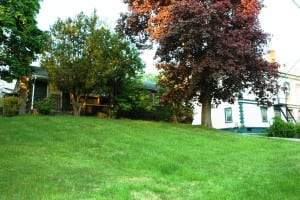 Dahlia house, left, located on Cedar Street behind Town Hall in Cold Spring, could get a brighter future in public service. Photo by L.S. Armstrong

The town government acquired the former home several years ago and although one room got a bit of sprucing up as a temporary fire marshal’s office, it has mostly languished. Before too long, though, it could get new occupants: the town’s Code Enforcement or building inspection office and staff, and perhaps, the town assessor as well. “It’s double the space they have currently” in the code-building inspection department, Town Board Member John Van Tassel noted.

Joined by fellow Town Board Member Dave Merandy, Supervisor Richard Shea, and, for a time, Town Board Members Betty Budney and Nancy Montgomery, Van Tassel led the way through Dahlia house (named for a previous tenant and not a flower). The walk-through constituted the agenda for the evening’s workshop session. Shea, Van Tassel, and Merandy are all experienced professionals in the building trades. A design consultant, Karen Parks, accompanied the board and will provide an estimate for drawings and related assistance for redoing Dahlia house.

With an estimated footprint of 24 by 46 square feet, the rectangle, one-story shingled house, believed to date from the 1950s or ‘60s, contains three bedrooms, a kitchen, bathroom, and living room. Outside, its lawn might provide parking spots. Almost as soon as the tour began Merandy began scouting out options to that end. “Wherever we can expand parking, it would be good,” he said. Parking at Town Hall is notoriously lacking.

In general, “this is kind of like a clean slate” to really do something with the Dahlia house, Van Tassel observed, as he unlocked the house’s back door. The interior lay dark – with minimal or no lighting – and quiet. Van Tassel began ticking off things to look at. “The roof is in bad shape,” he pointed out, soon adding a boiler system upgrade and installation of central air conditioning to a likely to-do list, along with – the board members emphasized – accessibility for the physically handicapped. Before they had gone far, they had added exterior renovations, duct work, windows, and a host of other items to consider, plus exterior renovations that could move the main entry from the house’s current front to the side facing Town Hall.

One question is, “do we want to make it look like a house still?” Van Tassel wondered.

“Not really,” Shea replied, suggesting a more “municipal-building” appearance might be in order.

Overall in regard to the house rehabilitation, “we’re not looking for a huge project. We’re not shooting for the stars here, but we want it to be clean and functional,” Shea explained.

Merandy, Shea and Van Tassel reported that they would confer on project planning, including budget considerations. Yes, they may wrangle a bit, Shea said, “but not for long. We’ve got to move. There can be a higher and better use of this space. We just want to dress the old girl up a little bit.”

“That’s like putting a skirt on a pig!” Van Tassel quipped.