The large kitchen area of St. Mary’s Parish Hall was filled with cooking aficionados one steamy July night recently, as “Chef Stef,” as Stefan Fraundorfer has dubbed himself, instructed the group on how to prepare crab and lobster cakes and a number of condiments to enjoy with them. In the space of two hours, attendees at the “Under the Sea and to Your Plate” class were taught, through a demonstration, how to prepare both baked and sautéed crab cakes, Creole mustard sauce, mango salsa, tartar sauce, and “Texas caviar” (a salsa with white beans, black beans and corn). 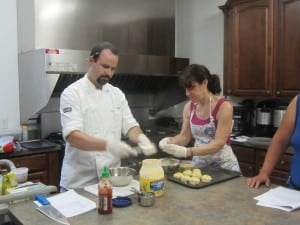 This was the second edition of the classes, which continue July 22 with a dim sum lesson, to include pork dumplings, crab rangoon and spring rolls. Future sessions will be shaped with suggestions from those attending. Chef Stef, a 2004 graduate of the Culinary Institute of America (CIA), currently works as the executive sous chef at a Connecticut country club.

After graduation he spent six months in management, working for the Abigail Kirsch group, a high-end event venue operator, as an assistant manager at their Bronx Botanical Gardens property. He realized he was not done with cooking, and decided to return to it, working first at a company where he did an “externship” while at the CIA. His current job requires him to be in charge of all kitchen operations, or, as he puts it, “all the problems come to me, and I solve them.”

Fraundorfer has always had an affinity to teach. He is registered as a CIA mentor in their national program, in which students are paired with a CIA graduate who provides “guidance and structure,” according to the CIA website, as they pursue their careers in the industry. These classes are something new for him, though. Organized through meetup.com, a grassroots affinity group website, the “Cooking With the CIA” overall group founder Beth Terrill teamed with Chef Stef to offer a successful set of morning and evening classes in June called “Appetizers Fit for a Summer Party.” 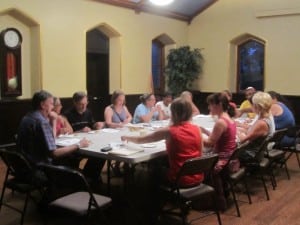 At the end of the session, cooking class participants gather to sample the goods.

These sessions were the start of what is hoped to be an ongoing series of Chef Stef classes at St. Mary’s. The structure of that class, in which they made garden salsa, guacamole, caprese skewers and bruschetta with crostinis, was similar to the second edition, with the class beginning with a quick introduction, followed by the preparation and cooking of each individual dish, some with participation from a volunteer attendee, questions answered throughout, and finally the happy consumption of all that was prepared, gathering round the large table in the Parish Hall.

Class duration is noted beforehand, and generally lasts from one and one-half to two and one-half hours. The cost varies, according to ingredients; it was $20 for the first class and for the upcoming dim sum edition, while the seafood session cost $30. Chef Stef called St. Mary’s “very gracious in meeting our needs and in setting up for us.”

Outgoing and clearly comfortable in his role as teacher, Chef Stef welcomed everyone by pronouncing the cooking “very easy, enjoy.” Throughout the demonstration he included humor and a disdain for pretense, often recommending generic products over pricier brand names. Copies of recipes were distributed for participants to follow while the preparation was done. As he prepped and cooked, Chef Stef explained secondary matters, for instance with the baked crab cakes “the idea is with egg yolks, once they’re heated above 100 degrees, they become like a glue, binding things together.” 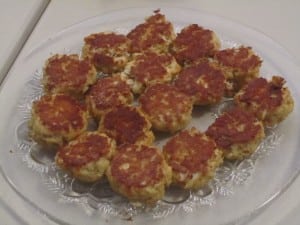 Demonstrations included such seeming basics as the best way to crack an egg and chop various herbs; an explanation as to what pasteurization entails, along with instructions on how long each dish would keep after refrigeration or freezing, and the proper way to de-thaw particular dishes. He waxed enthusiastic over certain ingredients such as sriracha (“I could do a whole class on sriracha”) and panko. Holding up a mango, Chef Stef took time to point out the specifics on cutting and peeling the fruit and how to measure the “small dice” needed for the salsa being made.

Above all there was an atmosphere of chill, a “don’t go crazy, you’re making it at home, for yourself, and that’s leaps and bounds above buying it somewhere.” Participants appreciated this tone, with one man (and there were lots of men enrolled) saying, “He’s fun, and that makes a difference.” Jana Kolpen, one of the volunteers, said she was “new to Cold Spring and I love to cook and love to eat and this is also a nice way to meet people.”

For more information and to sign up for one of the next sessions, which meet at 11:30 a.m. and 7:15 p.m., visit meetup.com/cooking-with-the-CIA. Classes meet in the kitchen of the Parish Hall at St. Mary’s Episcopal  Church, 1 Chestnut St., (at the corner of Routes 9D and 301) in Cold  Spring.

One thought on “‘Chef Stef’ Conducts ‘Cooking With the CIA’ Classes at St. Mary’s”