Former President Bill Clinton and former Secretary of State Hillary Clinton attended Saturday night’s (July 20) performance of King Lear at the Hudson Valley Shakespeare Festival at Boscobel.  According to others in attendance, they were the first on their feet to give the cast, led by Stephen Paul Johnson as Lear a rousing ovation at the conclusion.  This marks the Clintons’ second visit to the Festival; they attended a 2009 performance of Pericles, generating as much excitement amongst the audience, the actors and the staff as they did this time around. 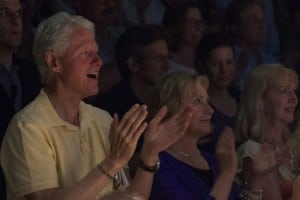 Bill and Hillary Clinton join other theatergoers in applause after Saturday night’s performance of King Lear. 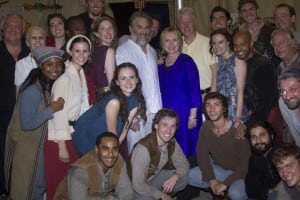 The cast gathers round Bill and Hillary Clinton post-performance.