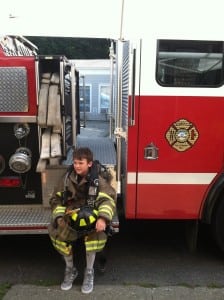 A junior firefighter suits up in training gear.

The Junior Firefighter Academy, now in its 11th year, is open to fourth through eighth graders and sponsored by the Cold Spring Fire Company and the Philipstown Recreation Department. Since the beginning, donations from community members have allowed campers to attend the Academy at no cost.

Throughout the one-week program, firefighters, EMTs and paramedics volunteer to train students in lessons such as the history of firefighting, fire prevention, firefighting tools and equipment, first aid and the importance of teamwork and physical fitness.

A number of instructors are former campers themselves, including Nick Junjulas, who believes volunteering at the Academy is “fun and makes [him] feel like a kid again.” On whether attending the Academy encourages local youth to join the fire department down the road, Cooper Cardenas says, “If it weren’t for this camp, I would have never thought to volunteer.” Cardenas is a 14-year-old and a volunteer for the Continental Village Fire Department. 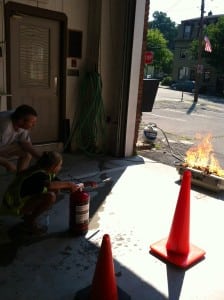 Upon arrival the first day of camp, junior firefighters are divided into groups and issued uniforms and photo ID tags that must be worn at all times. Returning campers are given the opportunity to contend for the position of platoon leader — a skilled student who holds responsibility over his or her group. Each student earns certification in First Aid and CPR post-graduation from the Academy.

The Academy offers field trips to the County 911 and Fire Training Center as well as the Fire Museum located in Hudson, N.Y. This year campers had the opportunity to observe a medical helicopter perform a demonstration on the field of Mayor’s Park, followed by a special barbecue lunch for campers and staff.

A graduation ceremony took place Saturday, July 20, at the Dutchess Manor in Beacon.