Several years ago, a young woman named Sally Ann fled London in a hurry, flew to JFK, and took a cab straightaway to a book party on the Upper West Side, where I met her for the first time. She was wearing cowboy boots and a short, flowered sundress. She was melodramatic, wicked, brilliant, and deeply affectionate. I found her both hilarious and full of it, and we immediately became great friends.

Within a few days, she had ensconced herself in a tiny, wobbly apartment on one of Greenwich Village’s most exquisite blocks. She had a bedroom just large enough for a queen-size bed and a pair of slippers; a living room barely twice that big, and a miniscule bathroom whose cracked ceiling often dropped plaster chunks onto the antique-tiled floor. Her “kitchen” consisted of a two-burner hot plate and a refrigerator that could hold a couple bottles of champagne and not much more.

She invited me to dinner from time to time, and would make amazing little meals such as chicken livers with Madeira and bitter greens, or duck legs with lentils. She always opened a good Bordeaux, and we sat on the floor to eat.

She had few possessions — you can’t fit much in 300 square feet — but all of them were stylish.

So it surprised me to learn, a few years into our friendship, that every Sunday since she’d arrived she’d gone to a certain dreary restaurant down her street and ordered the same thing for dinner: turkey with stuffing, gravy, and mashed potatoes. I joined her once, then refused to go back. All the food tasted as if it came from a can, even the meat.

The very idea of eating the same blatantly mediocre meal week after week in a city famous for its culinary brilliance irritated me, and I tried to convince her to change her ways.

“Why waste money on something so awful?” I asked.

She shrugged. “It tastes the same every week,” she said. “I like knowing what to expect.”

I suppose there is only so much novelty a person can take, after all. And in a topsy-turvy life, routine — even bland routine — can feel like an anchor. 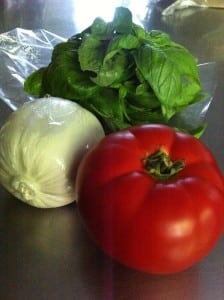 I’ve thought about this often since she moved back to London, and have come to appreciate the wisdom of her habits (if not her palate). In fact, I’ve realized that I, too, quickly establish routines in a new place.

Here in Vermont, for example, I spend every Monday (my day off) at a spot in Woodstock called Mon Vert Café, where I park myself at a table, plug in my laptop, eat a scone and then later a sandwich, and write for several hours.

We all need a mixture of adventure and familiarity in our lives, though the balance is different for each of us. Some people eat the same few things every day, changing it up only from meal to meal. Others follow a weekly routine. I try a lot of new things, but revisit familiar ones often, on a cycle that is part kid-based (I make pesto when Dosi requests it, for example, and macaroni and cheese more than I care to admit) and part yearly — which means that every July, I eat July foods.

Peter came to visit last weekend, and we went shopping for supper. We scanned the gourmet market looking for novelties, but eventually had to admit that what things looked most compelling were the tomatoes, mozzarella, and basil — the same trio we’ve both eaten since long before we met.

Back at camp, we sliced the tomatoes and arrayed them on a plate, drizzled them with olive oil and tore basil over the top. Then we ripped into a loaf of crusty bread and cut up some salami to round it out. We spread newspaper on the floor of my cabin and sat down to our supper. And though it tasted exactly as I wanted it to — exactly as I expected — all the same it felt like a very stylish adventure.

The simplest version of this salad includes no vinegar, just olive oil, salt, and pepper, which combine with the sweet-acidic juices of the tomato to make a delectable dressing. But the variation with balsamic, onions, and garlic is also quite delicious.