Joined by law enforcement officers, firefighters, and emergency medical aides, civilians rushed to the assistance of a woman struck by a vehicle early Wednesday evening on Morris Avenue in front of the Butterfield Library. 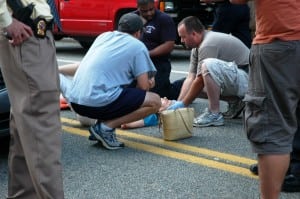 A Philipstown Volunteer Ambulance Corps member and civilians reassure the victim shortly before her journey to a hospital. Photo by L.S. Armstrong

According to an initial account at the site, she had been crossing the street mid-block when hit by a van going northbound. It remained stopped in its lane, as did a car, not involved, going southbound when the accident occurred around 6 p.m.

The unidentified woman lay in the street, conscious and talking but with a bloody cut or abrasion on her left elbow and with apparent difficulty or pain in moving her legs. A small gathering of good Samaritans, including at least one man who seemed to have emergency medical training, surrounded and ministered to her. 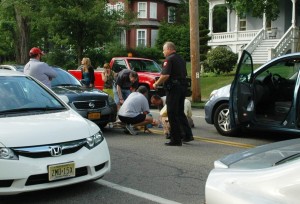 Good Samaritans, aiding the woman struck, and Cold Spring Police Officer Bill Bujarski were among those responding to the Morris Avenue accident. Photo by L.S. Armstrong

Not long afterward, an ambulance from the Philipstown Volunteer Ambulance Corps arrived. Its crew put the victim on a stretcher and took her for hospital treatment. A TransCare SUV also pulled up to the scene.

Bujarski told Philipstown.info that the victim did not seem to sustain any serious injuries, nor did the vehicle that hit her show any obvious sign of impact. “No damage; it was a bump,” he said of the collision.

The van was allowed to continue on its journey after Bujarski spoke with the driver.