Beverly Barker specializes in eras, that is framing an era in the context of the history of the American Girl dolls, in workshops she has been giving at libraries, including Butterfield, for the past ten years. Now Barker’s own era at the library is drawing to a conclusion, as she conducted the final series of these very popular workshops at Butterfield for three successive afternoons this past week (July 15 – 17.) 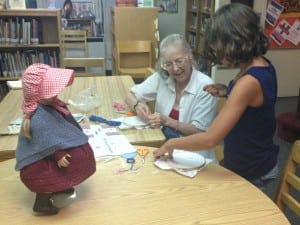 The workshops are simple in structure. Barker chooses a particular doll, whose story and clothing represents a particular moment in time, and she begins by talking to the participating children about the era, telling the story of the doll, always a central character. For instance, in Monday’s session, the focus was on “Kirsten” whose story had her emigrating from Sweden to America in 1854 to find a better life.

Barker’s notes describe the conditions in steerage on the cargo ship the family sailed on, their train journey to Chicago and the paddlewheeler which took them to the Minnesota Territory. Describing the immigration to the west, Barker detailed why northern Europeans settled in the areas they did.

She then covered the industrialization of the cities on America’s east coast, and the spread of manufactured goods. This led to a mention of the invention of the sewing machine and then to the fashions of the time and why, from a social and practical perspective, they evolved as they did. By being able to tie in this information with actual clothes the doll was wearing, from head to toe, Barker was able to impart actual information in an engaging, fun way.

Beyond the clothing, Barker’s extensive notes explored the lifestyle of a girl Kirsten’s age, living at that time, from school to chores, and the skills a girl of that era was expected to acquire, including quilting.  Finally, to tie in with the craft at hand, Barker explored “embroidery for the home” calling it a continuation of the traditions of old. “Their home was the center of their world and as much as possible was done to make it an inviting and comfortable place. The furniture was all handmade from wood, so colorful pillows and cushions were sewn to cover chairs and benches. Embroidered wall hangings were needed to decorate the walls.” 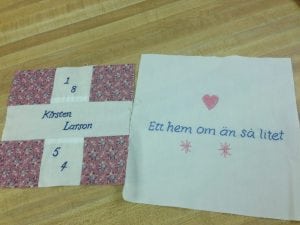 Monday’s project: a needlepoint in Swedish, which  translates to ”It takes very little to make a house a home” to go along with the story of ”Kirsten.”

Teaching the attendees the basics of back stitches, the project for Kirsten day was to embroider a needlepoint with the Swedish phrase “Ett hem om än så litet,” whose liberal translation (not word for word) is “It takes just a little to make a house a home.”

Printed materials she distributed for take home gave visuals on the stitches used, so the participants could finish off their embroideries and perhaps start ones of their own. The other days promised different embroidery styles, tied in with the different dolls and eras chosen.

One eight-year-old, Liv, was intently focused on her stitching. She said she had American Girl dolls at home (her favorite is Felicity) and mentioned twice that she would be returning for each of the other sessions.

Barker, who as a theater major in college studied costume history, started the workshops for an afterschool program in Chappaqua in 2000. With eight weeks to cover, she chose a different doll for each, always one of the historic ones. Her husband, a librarian within the New York Public Library system, helped with the extensive research involved. “Each time they added a new doll from history, I added a new class,” she said. 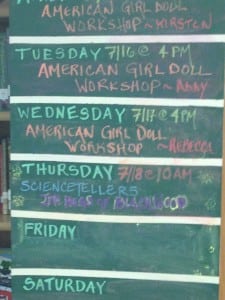 She admitted, after prodding, that her favorite doll was “Felicity”, “because I like the 18th century and the clothing and I have a better knowledge of the late 18th century than other times.” She’s also partial to “Rebecca,” a 1914 character, “lots of Lower East Side, Coney Island, unionization, Triangle Shirtwaist Factory fire — I probably enjoy the Rebecca books the most, because they’re about that period.

Barker was a member of the Embroiders’ Guild and it was there that she met a librarian from Wappingers Falls who suggested that these workshops would be perfect for libraries. That began over ten years’ worth of library programs, up and down the Hudson Valley, from Esopus to Beekman, Staatsburg and beyond.

Open to children of all ages (and there “absolutely” have been boys in attendance at some), Barker has seen a wide variety of skills, and says that some five-year-old with great motor skills and good hand/eye coordination can master tasks that many older children cannot. She notes that “some kids don’t know how to use scissors or straight pins, because people just don’t know how to sew anymore.”

Maureen McGrath, head of programming at Butterfield Library, called the program, which the library has hosted for about 10 years, one of their most popular. The age range has shifted down (McGrath isn’t sure why) and the sessions have frequently been filled to capacity, with a wait list. Now Barker feels “it’s time for younger hands to take the helm,” and she will be doing her last workshops in August at Millerton. She’ll miss it, though.

“I love giving children a context, so if they go to a museum, they can look at a painting — say from the Civil War — and recognize the time from the clothing,” Barker said.  “It’s one more way to relate to history and to keep the chronology straight.”