Leonard Freed, the Magnum photographer who lived in Garrison from 1980 until his death in 2006, has been exhibited widely, and has prints in many collections, including three obtained by Edward Steichen for the Museum of Modern Art. 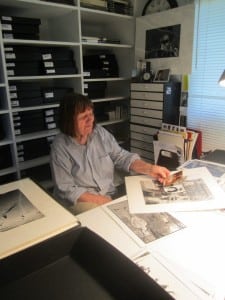 Brigitte Freed in the print-filled archive room.   Photo by A. Rooney

Still, in more than 50 years of photographing a multitude of subjects, from Indonesians living in the Netherlands to the body of work he is most known for, documenting the African-American civil rights movement, there are images which have never been displayed publicly. His widow, Brigitte Freed, is joining with Cold Spring’s Gallery 66 NY, to present an exhibition of these never-before-seen prints, all related to animals, entitled Man and Beast. The show, which opens Aug. 2, with an opening reception from 6 to 9 p.m., runs through Sept. 2. A preliminary soft-cover book has been produced to accompany the exhibition, and a larger edition, with more images, is planned.

“Leonard was a cat person,” Brigitte says, and, referring to Man and Beast, “he always wanted to make this collection.”

The “Beasts” captured by Freed’s camera are domestic and wild, horses, gulls, dogs and cats, goats, swans, a snake. The animals are making their way in what is in some cases an environment altered by humans, but in most of the images the force of the creatures’ own distinct behaviors comes through. Whether the setting is urban or rural, the animals retain an individualistic spirit, whether or not they are tethered to a human. Throughout there is a feeling that ultimately these animals and birds are persevering in just what it is they’re meant to be doing in this world. There isn’t a coy image in the collection. 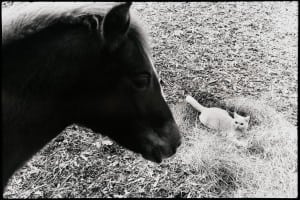 Writing about these images in an essay originally published in 1998, and reprinted in the new book, Cold Spring’s David Rothenberg said, “He finds his pictures; he never sets them up. But he sees amazing things, complexities, odd and unforgettable interactions. These animals are inquisitive, working, making do, alive with a visual intelligence as seen by the photographer, making sense of the too-human world.”

Brigitte Freed expanded upon her late husband’s life and work for The Paper/Philipstown.info and these are excerpts from that conversation: 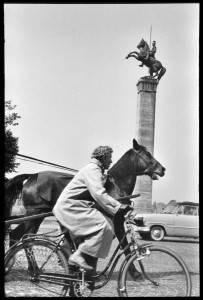 “He was from an immigrant family who all came from the same little town in Russia; his parents met through a matchmaker in New York City, where he was born [in 1929]. He wanted to be a painter; he had a studio in his parents’ house and went to art school, but his mother told him his paintings were ‘flat’ so he forgot about painting. He went to Europe in 1952; he traveled by boat, hitchhiked, spent 50 cents a night for hotels in Spain, North Africa, Italy. In Italy, which he loved so much, he met a young man who had a small camera, and was traveling around, taking pictures and selling them to the newspapers. Leonard thought ‘that’s a nice way to see the world,’ so he got a small camera himself and started taking pictures in Paris. He settled in Amsterdam, took a darkroom course and sold his first picture there. He traveled to Cologne to get a secondhand Leica — he bought a new one every two years — eventually there were about 30 of them. He returned to America in 1954, and photographed the Hasidic Jews in Williamsburg (Brooklyn), and also lots in Little Italy. Steichen told him to get back to Europe, because if he stayed in New York he would wind up working in advertising. He went to Life Magazine, and they looked at his work and immediately sent him off with Cornell Capa, to be his assistant. 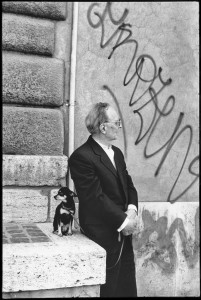 “We met in 1956. He was on assignment for Look Magazine, photographing Naples; I was vacationing. He came to visit me in Germany, although I didn’t give him my address because I thought he was a playboy! He got it from the youth hostel. He had a Lambretta [motor scooter] and he came over the Alps to Germany. My mother thought he was a spy, because he asked so many questions – it was the time of the Hungarian revolution. I told her he was a journalist and they ask questions. My parents loved him. We moved to Amsterdam, got married there, and my daughter was born there. We loved the artistic community of Amsterdam, and there he published his first book, Jews of Amsterdam. I printed the pictures – we always had a darkroom in our home.

“Leonard wasn’t in America for seven years. In 1963, he made a picture of the Berlin Wall. At the wall there was a black soldier. He was deeply enthralled, though they never spoke. The GI was defending democracy in Europe but at home he had a very difficult life. Leonard came back and said ‘We have to go to America.’ We went to Martin Luther King’s (Jr.) March on America, getting there at 5 a.m. for all the preparations and staying for the whole thing. The pictures he took [of this and much more] were made into a book, Black and White In America, and were sensational; lots of Europeans bought them. We returned to Europe, because Leonard didn’t like the politics in America, and he got lots of assignments. 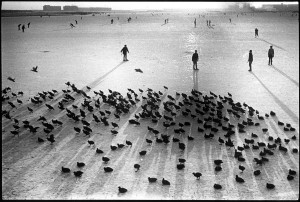 “In 1970 we decided to return, and we got an apartment in the West Village. He became a full member Magnum photographer with constant assignments — he spent the rest of his life with them. He photographed New York City a lot, made the book Police Work, which was self-assigned work documenting police officers on the job, Rikers Island and what was then a bankrupt, corrupt city.”

During this time Brigitte became a fashion designer, and started what later became a 22-person business. With two incomes allowing them to week-end outside of the city, they fell in love with Garrison after visiting a friend. After renting for a few years, in 1980 they moved to Garrison permanently, buying a home in the woods, where Brigitte still lives, in a rambling, bird-song filled compound which includes Freed’s archives and collections, and from which Brigitte manages the many requests for prints, books and loans for exhibits. 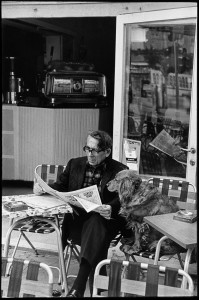 A quote from Leonard Freed, included in the Guardian UK’s December, 2006 obituary reads, “Suddenly, I feel as if I belong to a tradition. To see life, see the world, be witness to great events, peer into the faces of the poor, the mad, to understand the shadows of the jungle, hidden things, to see, to rejoice in seeing, to be spiritually enriched.”

Also on view at Gallery 66 NY will be Suzanne Langle’s modified concrete sculptures of Fantastical Beasts: creatures whose domain exists on the spiritual bridge between the myths and mysteries of creation and the physical world.  Gallery 66 NY is located at 66 Main St., Cold Spring, For further information, visit gallery66ny.com or phone 845-809-5838.