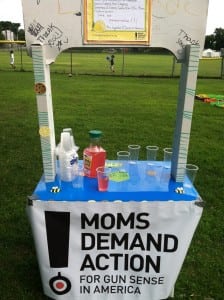 More than 50 members from the Hudson Valley chapter of the organization Moms Demand Action for Gun Sense in America joined together for an afternoon of food, games and music at Mayor’s Park Tuesday, July 30. Jane Ponlon of Nelsonville heard about the event the day before when she was at Canopus Lake with her family. “It’s a great cause, so I said yes. And I made some lemonade!” Across the country, chapters are holding lemonade stands to promote gun law reform. Their special recipe calls for “lemons from Congress, sweetness and common sense.”

For decades, gun control has prompted both national and local debate. The fact that the second deadliest mass shooting by a single person in American history took place at an elementary school has radically renewed efforts to pass gun control legislation in educational institutions. In the wake of the spree shooting at Sandy Hook Elementary School in Newtown, Conn., Alexandra Dubroff of Philipstown became involved in Moms Demand Action for Gun Sense in America. “Like everybody, I was really devastated about what happened,” said the mother of two. “Moms Demand Action was just starting up. I went to the Facebook page and asked what I could do and they suggested I start a local chapter.” 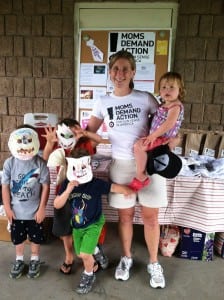 Alexandra Dubroff, founder of the Hudson Valley chapter of Moms Demand Action for Gun Sense in America and organizer of the event.

A nonpartisan organization, Moms Demand Action was created to demand reform from state and federal legislators, companies and schools concerning gun laws. Its website lists five “common sense solutions” to counter gun violence, which calls for a ban of assault weapons and ammunition magazines that hold more than 10 rounds as well as background checks for all gun and ammunition purchases.

Susan Wright, a music teacher at Beacon Elementary School, wrote a song after the Sandy Hook tragedy titled A Mother’s Kiss. Once the song was uploaded to Youtube, it caught the attention of Moms Demand Action, who asked Wright if she’d be interested in performing it at events. “It’s about Newtown but also asks ‘why are there all of these guns?’ It could have been my classroom. My students are the same age as those kids. It could have been any school.” Wright explained that emergency drills and procedures were updated post-Newtown, “it’s almost kind of scary,” she said.

For more information visit momsdemandaction.org and the Facebook page for the Hudson Valley chapter.