Cites his long career as police professional as an alternative

Four years after running for county sheriff and losing to the now three-term incumbent, Cold Spring native and career police officer Kevin McConville is once again challenging Donald B. Smith, declaring the time has come for a 21st century sheriff who will deploy sophisticated tactics, cost effective management and outreach to all communities, regardless of political affiliation or other distinctions.

During a one-hour interview at 69 Main St., McConville told The Paper he had received “tremendous encouragement from a lot of people to make another run. People who feel left out by the current sheriff because of where they are geographically or their political affiliation or whether they are financial supporters of his or not. I want to be a sheriff for all,” he declared underscoring a major theme of his campaign.

Given the results from his last effort when he lost to Smith 11,563 votes to 6,440, running as a Democrat against the Republican Smith and given that Putnam retains its reputation as one of the safest counties in New York State, McConville must convince voters a change is needed.

In a reversal of strategy this time around, McConville has returned to his Republican roots to challenge Smith for the Republican nomination in a primary election on Tuesday, Sept. 10, making the race likely to be determined by this lower turnout narrower constituency election than the general election in November. The Democrats have not fielded a candidate, adding to the sense that the next top cop of the county will be chosen in an intramural contest among Republicans in a Republican-dominated county. 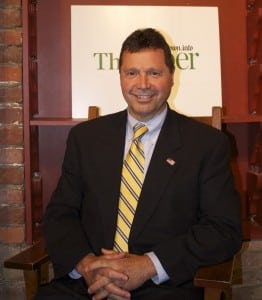 McConville has reason for some optimism. When the Republican County Committee met in June to decide which candidate the party hierarchy would support, Smith won with 121 votes but McConville received 80 votes from committee members signaling significant disaffection at least among party activists, the very people who can get the vote out in a primary.

Further complicating the landscape for Smith, McConville wrested the Conservative Party nomination from him, which provided 2,108 votes for Smith last time around. “They interviewed me and felt I addressed the greater needs of the county and that my credentials would make me an excellent sheriff,” McConville said. In a Republican primary, having the Conservative nod can be a distinguishing ideological factor especially when the incumbent had it and lost it. Smith has retained the even smaller Independence Party line, which supplied him with 1,418 votes four years ago.

While the inside political maneuvering is inevitably a big part of a race where the other major party is not offering opposition, McConville seeks to emphasize his professional police career as the chief reason citizens should want him in the office that supervises the department budget of slightly more than $4.2 million, with approximately 90 personnel.

McConville has spent 30 of his 56 years working on the Metropolitan Transit Authority (MTA) police force where he started as a line officer and rose through the ranks to first deputy and then spent three-and-one-half years as the chief of the department with the support of then Gov. (and now Garrison resident) George Pataki. The MTA force has more than 700 officers and staff with a budget of more than $100 million. “It’s the seventh largest police force in the state. Its operations (including the Metro-North and Long Island railroads) are spread over 16 counties. You have to interact with local police departments, all the district attorneys in those counties, transportation groups and local governments,” said McConville. He is currently employed as the director of security at Hudson Valley Hospital.

McConville sees his varied experience serving under a series of professional police leaders, the winning of their confidence, and eventually becoming a leader himself as ideally suited to him for the challenge of upgrading the Putnam Sheriff’s Department. He sees the department as dutiful, but slow to introduce innovation in training, tactics or technology and led by an individual who lacks deep police experience and is too satisfied with trumpeting the county’s low crime rate rather than preparing for what might happen tomorrow.

“The sheriff is always touting Putnam as one of the safest counties,” said McConville, who argues there are signs of an uptick in several crime categories, in particular property crimes including burglary, larceny and criminal mischief. And although McConville isn’t sounding an exaggerated alarm, he seeks to point out what he characterizes as a “level of contentedness with the way things are.”

McConville is also sharply critical of what he sees as Smith’s fiscal imprudence, in particular the sheriff running up ever higher overtime expenses at a time when the county is under budget stress from a prolonged economic downturn. The sheriff has butted heads with County Executive MaryEllen Odell and members of the county legislature over this issue.

“When I was at the MTA we looked closely at the budget. I managed to cut back without any loss of services resulting in a 67 percent reduction on overtime costs. I will do everything an elected official can do to keep this department’s budget under control. You have to act as if it’s our own money, because it is. I don’t feel the incumbent works that way.”

A new revelation about Sheriff Smith’s issuance of identification cards to private citizens that describe the holder as an adviser to the sheriff, reported by the Hudson Valley Reporter, has raised McConville’s ire. He sees the cards, which also contain the individual’s picture alongside an illustrated shield of the department, as indicative of an attitude of selectivity in how the sheriff conducts business.

“What’s the implication of these cards? That you’re connected to the operational office of the sheriff in some capacity. It’s incumbent on Sheriff Smith to answer all questions about this advisory committee,” said McConville.

In an intraparty struggle, elected officials often keep their heads down, fingers in the wind while working behind the scenes to keep tabs on developments. McConville demurred on discussing any support he has from such officials but he didn’t discourage a reporter from thinking that some of them had urged him to run. One sign of the McConville camp’s approach to this largely Republican contest is the retention of Park Strategies, a campaign and lobbying firm headed by former U.S. Sen. Alfonse D’Amato along with former Pataki officials as partners.

Click here to read an interview and watch a video from McConville’s opponent, Sheriff Donald Smith.