Sees opponent’s criticisms as not serious

As an incumbent, Putnam County Sheriff Donald B. Smith would appear to have the wind at his back as he seeks re-election to a fourth term in office. According to the New York state Department of Criminal Justice Services, Putnam County has ranked number one in criminal safety for the last three years in a row. To some extent that statistical result is certainly the luck of the demographic draw. But Smith always stresses that Putnam is not an isolated country-county, given service by two Metro-North train lines, a distance of only 50 miles from New York City, and a border with several counties that are on the state’s designated crime watch list. And there is no denying the highest-ranking police official in the county would be called to task were the crime numbers flowing the other way. 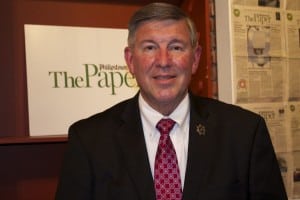 So Smith has a right to lay claim to success and he proudly touts Putnam’s safety record as the primary reason voters should return him to office. This election season he faces a Republican primary on Sept. 10, as well as the Nov. 8 ballot where he will be on the Independence Party line at the very least. Given the voting numbers over the last several elections, the winner of the Republican primary is the odds-on favorite for the race.

A former brigadier general in the U.S. Army with Vietnam combat experience (the Bronze Star among his awards), Smith easily summoned up the names and places of his time more than 40 years ago as a young officer who moved up the ranks under the pressure of leading soldiers in harm’s way. He tells the story of a young platoon-leading lieutenant only a short while out of West Point returning from a mission to find the company commander, a captain, boarding a plane. Smith was then told by a higher-up he was now the acting commander, a tenfold increase in responsibility. He was retained in the leadership position for a few more months.

Smith definitely sees his successful military career as directly relevant to his job today. “It felt very natural to me taking over at the Sheriff’s Department. It is a paramilitary organization with the same chain of command structure, the same terms are used, many of the values are the same as the military,” he said.

Although a more hardened politician from three straight election wins, Smith is quick to emphasize his motivation to serve the public remains just as central to his candidacy as when he first ran as “a reluctant warrior” a dozen years ago. “I wasn’t really seeking the job,” Smith said. “My wife Jane didn’t want me to run. But different leaders from all the different political parties asked me to do so. I really ran as a call to duty.”

Obviously  referring to his Republican primary election opponent, Kevin  McConville, Smith said he believed there were two essential questions that a candidate has to answer: “Why are they running, is it public  service? And how they run, what kind of campaign do they run?” Smith  sees McConville’s challenge as a purely self-serving quest for a better job than McConville’s current employment as the head of security for  Hudson Valley Hospital Center. McConville was also a career police officer for the Metropolitan Transportation Authority (MTA), rising to  the position of chief of the department. McConville (also running on the  Conservative Party line) asserts that his police experience is superior  to Smith’s.

“I have the greatest respect for the work the officers at the MTA do but that department doesn’t compare to the complexity of the sheriff’s responsibilities,” said Smith. The sheriff provided a comparison chart of services and duties that indicates over a dozen areas the sheriff supervises that the MTA police do not perform. Smith points out: “The sheriff is running a jail as part of his responsibility. The county jail, which is the first stop for all prisoners, houses inmates sentenced to one year or less and also houses, as an income producer, prisoners from the state and federal system.”

For Smith the jail also serves as an example of why his tenure has seen an uptick in overtime costs, another criticism McConville (and some other county politicians) makes. There are state rules to operating a jail and there are contractual obligations to the staff. When a prisoner has to be escorted to the hospital in the middle of the night you have to pay for it. Smith readily accepts the overtime observation as truth and argues that “overtime is utilized to serve the mission; it is more cost effective to meet unexpected demand than hiring more staff for contingencies that may or may not arise in a given budget year.”

If there is a charge that particularly galls Smith, it is McConville’s assertion (without much specificity) that the Sheriff’s Department is behind the curve on technology. “I will invite you over and allow one of my sergeants to show you the technology and I won’t be involved. When the [U.S.] Vice President (Joseph Biden) came through Putnam County recently (on his way to Connecticut) the federal officers involved were ‘drooling’ with envy over the way our assigned vehicles were outfitted,” said Smith. He easily rattles off acronyms and brand names of computer and camera equipment that is used both in cars and in the office for tracking, investigating and solving crimes as well as automated communications programs for senior citizens and merchants

Alliances formed with federal, state and local police and emergency response agencies are another signature accomplishment claimed by Smith. “I have brought law enforcement together. When I became sheriff they weren’t working together. Now we’ve come so far we have a multi-agency emergency response team training in special weapons and tactics involving deputies and local police.”

Smith, who calls himself an in-vitro Republican, born to the party’s positions on issues, still believes he has wide support among people with other party affiliations. He pointed out that he would not expediently change affiliation to run for political office. His opponent McConville ran as the Democrat in the previous race for sheriff. The Democrats don’t have a candidate this year.

Smith faces questions as to why he issued identification cards to supporters that called the cardholder an “advisor to the sheriff” an issue he doesn’t see as a big deal. And his opponent faces questions about why a former “advisor to the sheriff” is now contributing to McConville’s campaign, investing in a new newspaper that is specializing in negative Smith stories and has an office in the same building as McConville’s campaign. All subjects for a later date.

“I truly believe I have gained the trust and confidence of the people. I think they know I will continue to work every day doing my best to keep Putnam County safe,” said Smith.

Click here to read an interview and watch a video from Smith’s opponent, Kevin McConville.