But balance sought, to protect public

Philipstown’s Town Board last week joined the outcry against unfunded mandates and backed state-level legislation against them, but also expressed support for using mandates to protect the public.

Enacted by a higher level of government, such as New York State, mandates demand action by lower jurisdictions, such as counties, towns, villages, and school districts. The latter often contend that mandates impose new obligations that require either new taxes or decreases in other public services due to budget constraints. 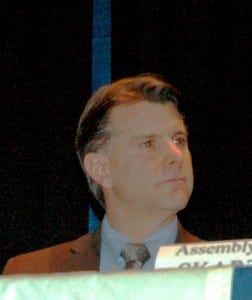 Supervisor Richard Shea brought the arguments close to home by pointing to one costly unfunded mandate, a state initiative on wetlands protection and storm-water management. While it was “a good idea to protect wetlands and talk about storm water,” Shea said, “good ideas need to come with commensurate funding from the state. We can’t bear all the burden of everybody’s great ideas.”

According to a legislative memo accompanying the text, Gipson’s bill would “require the state to fund mandates that are unreasonably costly, ensuring that our local municipalities are protected from financially egregious directives and can continue to serve our constituents in the most cost-effective and efficient manner.”

Assigned in May to the state Senate Judiciary Committee for consideration, the bill was forwarded to the state attorney general for an opinion in June and went back to the committee later that month. If it succeeds, the ban would apply to statutes passed by the state Legislature as well as to gubernatorial executive orders and rules and regulations from state agencies and departments.

The proposed law provides that any provision identified as “an unfunded mandate shall cease to be mandatory in effect and shall become voluntary in operation.” It further ensures that if a mandate requires expenditures by the lower-lever government and produces an aggregate net increase in spending, the “increase in expenditures shall be offset by monies provided to political subdivisions for the specific purpose of funding such provision” and by money saved from not having to carry out whatever unfunded mandates get repealed. 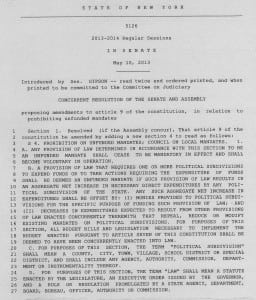 The first page of Gipson’s bill.

However, the new legislation, S5126, would not cover all unfunded mandates. Among other exemptions, it spares unfunded mandates already in existence when the ban takes effect, those that comply with federal laws, those which would cost less than $10,000, those applying to private as well as government entities, those willingly accepted by the lower-level jurisdiction, and those that involve reapportionments. The legislation would create a state-level council to mediate disputes over mandates.

“I am trying to change the way Albany conducts its business in many respects, and reforming mandates are a critical piece of improving Albany’s budgeting and legislative process while also easing the fiscal strains on local and county governments,” Gipson informed Shea in a letter, July 23. “I am fully cognizant of the importance of stopping unfunded mandates, but in order to make an aggressive and effective case, I want to be armed with resolutions of support from across the 41st senate district.”

Shea and Councilors Dave Merandy and Nancy Montgomery agreed to help, unanimously passing a resolution to declare Philipstown “hereby supports and calls upon the State of New York to pass the proposed bill.” Councilors John Van Tassel and Betty Budney missed the meeting, due to the recent death of Van Tassel’s father and health emergencies in Budney’s family.

Shea said that the state’s wetlands-protection initiatives took five years of work to implement. “We spent hundreds of thousands of dollars and a lot of volunteer time,” in creating maps and undertaking similar tasks. Moreover, he added, the rules increased the workload of the town wetlands inspector and introduced numerous stipulations property-owners must follow when disturbing land, as in construction. “We don’t mind sharing the costs,” but want the state to contribute something, too, he said.

Commending Gipson’s draft legislation for supplying funds for carrying out mandates, Montgomery drew a distinction between unfunded mandates and mandates per se. Unfunded obligations “have created a huge burden on our municipalities – most of our budget, it feels like sometimes,” she said.

At the same time, she cautioned, “some mandates are necessary. A mandate sometimes protects citizens.” She described the wetlands measure as “a good idea. It’s good to keep a close eye on land use.” Similarly, she added, “I think the New York SAFE Act was a good idea and to repeal that because we can’t provide those services because it costs too much I think is ridiculous. Protecting the citizens costs money. But if the state will provide monies to do that, it’s great.”

The New York SAFE Act, a stringent new gun-control law passed after the December massacre of young children and faculty in Newtown, Conn., has been denounced by gun owners and public officials, who claim it infringes on gun rights and/or imposes unfunded mandates regarding firearms regulation and violence reduction. In February, the Putnam County Legislature called for the repeal of the New York SAFE Act.