It isn’t every day that one sees a Native American Indian in full headdress riding on a horse through the parking lot of Beacon’s train station, but last Saturday was one of those rare days. If you mentally removed cars, buildings, porta-potties, litter and other signs of modern life from the picture, the Hudson Valley’s riverfront landscape of centuries ago was not difficult to envision. 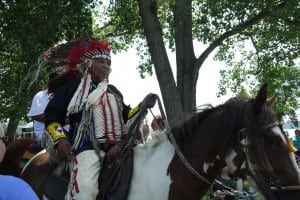 The man on horseback was a member of the Dakota Nation Unity Riders, who traveled from Manitoba, Canada, to rendezvous in Troy, N.Y., with leaders of the Two Row Wampum Renewal Campaign, a major statewide educational effort organized jointly by the Onondaga Nation and Neighbors of the Onondaga Nation (NOON).

As part of events honoring the 400th anniversary of the first treaty between New York’s Haudenosaunee Indians (Iroquois Confederacy) and Dutch settlers, a fleet of more than 200 Native and non-Native canoe and kayak paddlers launched from upstate New York on July 28 to travel more than 140 miles on the Hudson River to New York City.

The Unity Riders and hundreds of volunteer paddlers are traveling with the crew in solidarity, stopping in cities and towns along the way to spread the Campaign’s vital messages of peace, unity and environmental stewardship. Their destination is the United Nations on Aug. 9, for International Day of the World’s Indigenous Peoples. 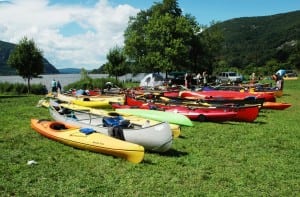 The epic canoe trip is a symbolic enactment that brings to life the imagery of the Two Row Wampum, the beaded record of this treaty. The Two Row Wampum belt has three rows of white and two rows of purple beads made from quahog clamshells. One purple row represents the Haudenosaunee in their canoes and the other represents the Europeans in their ships.

“In the Two Row, we agreed that we will travel the river of life together, side by side,” explained Jake Edwards, of the Onondaga Nation Council of Chiefs, in a press release. “One line represents a canoe carrying our laws, culture, language, government, and way of life; the other line represents the same for those who have come to this land. We will not try to steer each others’ boats, but travel side by side linked by peace and friendship.” 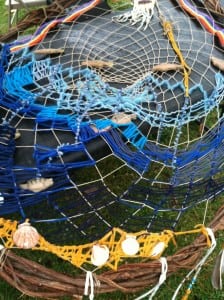 The enactment left Walkway over the Hudson in Poughkeepsie on the morning of Saturday, Aug. 3, and landed in Beacon’s Riverfront Park later that afternoon, where a festival organized by the Beacon Sloop Club was taking place. Because of four-foot swells on the river blowing against the tide, the organizers made the difficult decision of taking the more novice paddlers out of the water for that portion of the trip. They re-grouped in the park and waited to greet their fellow voyagers.

“We average about 200 paddlers each day,” said media coordinator Lindsay Speer. “Represented are people from 20 different nations, Native and non-Native, including all six nations of the Haudenosaunee, which consists of the Mohawk, Oneida, Onondaga, Cayuga, Seneca and Tuscarora. We also have people from Canada and the Netherlands. Residents of 14 different American states are allies and a solidarity group in Hawaii sent us all bracelets.”

Beacon’s waterfront was enlivened by Native American music and imagery. Authentic crafts were for sale. The sound of wooden flutes, drums and spoken word floated through the air. Performers included Joan Henry, David Amram, Spook Handy, The Nimham Mountain Singers and the Rivertown Kids, among other traditional and contemporary musicians and poets. 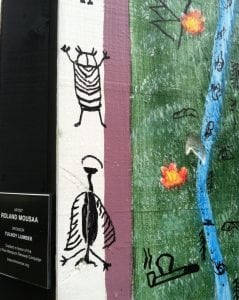 “They are the drawings of the home of the creator, telling the story of the white settlers who the Natives helped with their corn fields along the Hudson River, all the way to the west,” said Mousaa. “The drawings predict that, if we do not respect Mother Earth and Father Sun, our civilization will not survive.” The totems will be permanently displayed in and around Beacon.

Jim Sarles, aka Jim Red Fox, a storyteller from New York and a Lakota-Sioux descendant, explained the historical meaning behind some of the more cliché items on display. “Natives used the buffalo for everything: meat, skins, bones. The image of the buffalo skull pays homage to the animal for giving the Natives their life and sustenance,” he said. “A dreamcatcher (or ‘dream snare’) has the power to destroy bad dreams and replace them with good ones and are primarily for protecting babies.” He joked about how many people hang these hand-woven charms in their cars even though they are only effective during sleep.

The mission of the Campaign was passionately conveyed by Chief Dwaine Perry, of New Jersey’s Ramapough Lenape Nation, in a speech to festival attendees. “We hope that this vision of two peoples traveling down the river of life, side by side, in peace and friendship, will inspire us to look at what we’ve done and how we’ve treated our brothers and sisters and what that has meant for the earth on which we all depend,” he said.

Ted Hall, a non-Native from New Mexico who now lives in New York City, took a directly political stance in an interview. “My half-sister is quarter Lakota and quarter Hopi so I’ve spent a lot of time on a reservation. The racism and prejudice that I’ve had to internalize gives me a different understanding than a regular white guy,” he explained.

“We got constitutional democracy from the Six Nations. We wouldn’t have modern agriculture without the generosity of Native Americans,” he pointed out. “But the gifts that have been given to us by the indigenous have been returned with violence. When we start to reflect on our identity as a nation, and we see this wound that exists on the land and its original inhabitants who gave us our democracy, we cannot continue until we address that.”

By Sunday, when the convoy was camping in Cold Spring, NOON had registered its 500th participant. Ted Hall, who started paddling in Troy, continued with them to Dag Hammarskjöld Plaza, near the U.N., where the Haudenosaunee are to be greeted by the head of the Permanent Forum on Indigenous Issues. NOON has secured advance permission for 100 people from their group to attend the U.N.’s event for International Day of the World’s Indigenous Peoples. Onondaga Nation Turtle Clan Faithkeeper, Oren Lyons, is one of the speakers.