Sharing, talking and listening with compassion

The vicissitudes of life are unavoidable, and sometimes we can cope with them on our own, but usually having someone to turn to   alleviates the stress that the situation triggers. As critically important as family members or close friends can be, sometimes being able to turn to a person or small group of sympathetic people not part of one’s inner circle can give a different perspective and an alternate kind of support.

That is the rationale behind the nearly decade-old Life Support Group at St. Philip’s Church in Garrison. “We try to be really welcoming,” says Rev. Frank Geer, the church’s rector and facilitator of the group, which meets weekly, 7:30 p.m. Wednesdays, in the church itself (not the Parish House, which hosts Alcoholics Anonymous meetings at that time).

The group was started about nine years ago, in response to a parishioner who simply requested it, by mentioning to Geer that she had serious issues in her life. Geer turned to a member of the church, Jan Spaulding, a psychiatric nurse, and together they began the meetings, at first putting the word out about the group in the church’s newsletter and then in local papers. 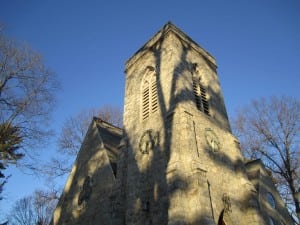 “When we started,” says Geer, “there were many groups out there devoted to a particular topic: grief support, divorces, etc., but this was designed for life itself — whatever in your life needs to be shared.” These issues include — among others — death, illness, divorce, problems with children, and the pressures of taking care of aging parents.

The group is open to all faiths, says Geer, “Jewish, Unitarian — you don’t even have to believe in God.” The sessions generally last about an hour and a half, and while Geer presides over them, he does not consider himself a leader, per se, “I really want everybody to share in the healing role, so I don’t sit here and respond to everyone as a person in the know as much as encourage everyone to share in talking and listening in a compassionate way — a way that allows them to get valuable feedback. Everybody shares the leadership.”

Anyone attending for the first time is welcome to get in touch with Geer ahead of time if they wish, via phone or email, to make introductions and/or talk a bit about their problem, or they can simply turn up at 7:30 p.m. on a Wednesday. What they’ll find is a small group — the size varies and can be anywhere from 1 to 10 or 12, sometimes no one turns up — who are seated on chairs set up in a circle in front of the pews.

“They come in,” says Geer, “and are made to feel welcome and then they sit down and we explain about the group, and try to make them feel comfortable. It’s an established group, so it takes some courage to come as a new person, to buy into it.”

One member of the group, speaking anonymously, said there were three simple rules:

1. Anything you say or hear is confidential and doesn’t leave the room and should you see someone from the group in an outside situation, you should walk on by unless they initiate the hello.

2. No advice is given unless it is asked for. Sometimes people just need to vent, so you should let them talk, as often the person is talking about the problem, not asking for a solution. No one is pounced upon and told what they should or shouldn’t do.

3. There are no “even turns.” Whoever has the biggest issue talks the most. Sometimes a participant doesn’t talk at all at a particular meeting because of this.

These conditions, said the group member, make for a safe environment where people can feel free to say anything they want. “We get a lot of storytelling,” says Geer, “and just discussions of things not related to particular problems. Geer’s wife, Sarah, describes it as “kind of the opposite of AA – it’s not highly structured, not programmatic.”

Some people come for a few weeks and move on, while others stay with the group for all sorts of reasons, including offering support to others. “Some people’s big issues have passed,” says the group member, “but they support the ones left behind. And smaller issues arise and you think ‘I’ll just go to group and work it out.’”

The group tries to keep within the 7:30 to 9 p.m. framework. If you are interested in attending and wish to speak with Geer beforehand, call him at 845-424-3571 or email him at [email protected] or come along on a Wednesday night, remembering again that it is in the church itself and not the Parish House. There are occasional cancellations due to holidays or winter road conditions, but nearly every Wednesday, support awaits.