Attempts to harness the wind in Philipstown advanced procedurally Tuesday (Aug. 13) when the Zoning Board of Appeals scheduled a hearing on a Garrison resident’s bid to use a small-scale turbine to produce energy for his home.

The ZBA also heard a strongly-worded request from representatives of the resident, science writer James Gleick, that the recently resigned ZBA chairman avoid any further role in the proceedings.

With a bare quorum in an unexpectedly slated meeting, the ZBA unanimously deemed Gleick’s application in order and set a public hearing for Sept. 9. (Earlier hearing sessions involved the possibility of a variance, no longer relevant.)

At Tuesday’s meeting, Hudson Valley Wind Energy’s Greta Passeri read aloud a letter asking that Vincent Cestone recuse – excuse – himself from ongoing board review of the project. Cestone resigned in July from his position as ZBA chair, but continues on the board itself.

“It is my belief, as well as the Gleicks’, that Mr. Cestone can no longer be fair and impartial in his decision-making regarding this application,” Passeri said. She cited what she regarded as inappropriate emails and comments by Cestone, as well as “a lack of tact and diplomacy” and said the applicants “have gone round and round with no solid direction from the ZBA” for too long.

“I do understand and appreciate that Mr. Cestone has served for numerous years, and in fairness to him, commend his dedication to the town and its residents,” she wrote. “However, as agent for the Gleicks, I am no longer comfortable that the powers and duties bestowed to Mr. Cestone as a member of the ZBA can and will be treated” in the manner “deemed essential when holding such a position.” Thus, she urged that he “recuse himself … and abstain from further participation during this process.”

Cestone told Philipstown.info Wednesday evening that “I am aware of the letter but haven’t seen it yet, so I can’t comment on it. But in my experience if ZBA members recused themselves every time someone asked or accused a member of being biased, nothing would ever get done.”

On Tuesday night, after Passeri’s assertions, the zoning board briefly discussed the situation.

ZBA Member Bill Flaherty said he tended to view Passeri’s letter as “inappropriate” and one that “I find somewhat damaging to his [Cestone’s] reputation.”

Dominic Cordisco, the ZBA attorney, pointed out that the ZBA cannot remove a member or direct Cestone to recuse himself. “It’s a decision he has to make” individually, Cordisco said. He said he would forward a background memo on various aspects of the matter to Cestone for guidance.

After the meeting, Doug Passeri, Wind Energy president, echoed his wife’s frustrations. “We should have been in and out in four months,” he said. Instead, the process has gone on for nearly a year. “It’s not fair. It’s a lot of wasted money,” he said.

Greta Passeri’s letter is not the only blunt piece of correspondence in the piles of papers associated with the Gleick application. When she brought similar complaints to the Town Board on July 11, Supervisor Richard Shea and other Town Board members promised to help move the decision-making along; and the next day, Town Board Member John Van Tassel informed Cestone of the Town Board’s intent. “I am very confused about your reluctance to proceed with this application,” Van Tassel wrote. “I hope we can count on your cooperation going forward.”

That evening, Cestone replied in an email to Van Tassel, Shea, Cordisco, ZBA colleagues, and Hudson Valley Wind Energy. “It’s clear to me the town wants to manage the zoning board and won’t permit us to manage our own business,” Cestone said. “I had hoped the town would defer to my 20 years of experience in ZBA matters and understand that I would always do what is best for the ZBA and the town. Independence of the ZBA is a hallmark of town government. And that independence is no longer part of this ZBA. I will not compromise on that key point. But since micromanagement is the order of the day you leave me no choice … So effective immediately, I resign as ZBA chair. I will remain on the ZBA as a member only.”

Town Clerk Tina Merando made copies of the emails available on Wednesday afternoon.

In accepting Cestone’s resignation as chairman on Aug. 1, Town Board members wondered whether he needed reappointment as a rank-and-file ZBA member. Shea deferred discussion until he could resolve the question. Thursday morning (Aug. 15), he confirmed that Cestone “is still a member until March of 2015,” with no further Town Board action required. 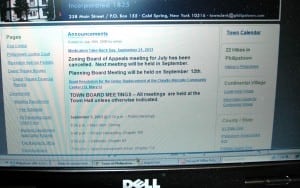 The official Philipstown government website for weeks has included a notice of no ZBA meetings before September. Photo by L.S. Armstrong

The Tuesday night ZBA session prompted a bit of confusion over scheduling. On Monday, a notice of the meeting appeared on the door of Town Hall. But before and after the Tuesday night meeting, the official town website continued to bear a contradictory, bold-faced message: “Zoning Board of Appeals meeting for July has been cancelled. Next meeting will be held in September.”

Reportedly recommended by a member of the public, an email dispatched by the Town Clerk’s Office Tuesday morning announced the meeting to those signed up to receive official alerts.