If you hike around the Hudson Valley, play golf on local courses, or weed your garden, chances are, you’ve encountered a reptile. Meeting a snake can catch people by surprise, and the Hudson Highlands Nature Museum wants to help the community get acquainted with resident snakes. The museum conducted its “Snakes Alive” program Aug. 3, for adults and children at the museum’s Outdoor Discovery Center in Cornwall. 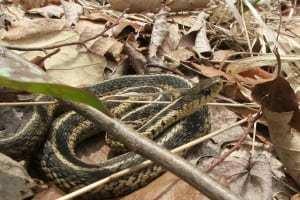 The garter snake makes itself at home in the Hudson Valley. Photo by Pamela Golben

Pamela Golben, Director of the Wildlife Education Center at the museum, aims to help people learn more about snakes year round. The “Snakes Alive” program, typically held twice a year, introduces the most commonly encountered local snakes and teaches participants how to identify them.

According to the New York State Department of Environmental Conservation, the state counts 17 species of snakes, while three – the timber rattlesnake, the copperhead, and the massasauga – are venomous.

“Snakes are an important part of our ecosystem,” Golben said. “We try to help people understand that if they see a snake, that the snake just wants to be left alone. Larger snakes help control the rodent population. When you remove the snake, you’re going to trade the snake for a rodent population. A snake is clean and does not carry diseases. You’re lucky if you have a milk snake or a rat snake around.”

Golben said that the milk snake, commonly seen in the region, is often mistaken for the venomous copperhead snake. The milk snake is not venomous, but should be left alone. The milk snake sports a bold pattern, and it also vibrates its tail, which may prompt people to confuse it with more dangerous reptiles.

The copperhead is a brightly patterned snake that can measure up to three feet in length. Its colors are distinct, a copperish head and a darker brown body with pinkish patterns, and though they don’t have rattles, they do vibrate their tails. The timber rattlesnake and the massasauga, large chunky snakes, both have rattles. The timber rattlesnake, which can measure up to six feet, is nearly double the length of the massasauga.

“A snake is not going to go after you,” Golben said. “When they sense your approach, most of the time, a snake will leave the area. If you see a snake, take a couple of steps back and take a look from a distance.”

“When snakes are aware and can sense people coming, a snake’s first inclination is to slither away,” Boucher said. “Leave them be. The more you mess with them, the more they will try to defend themselves.”

Snakes have great camouflage, and hikers particularly should be aware of surroundings and pay attention to where they’re walking. Golben advises anyone who plans to get out to enjoy nature to familiarize themselves with trails and grounds and learn to identify snakes of the area.

“People should be familiar with trails,” Golben said. “And if you do encounter a snake on a hike, take a few steps back and go around them. We find that most often, snake bites are on the hand. People should never reach for snakes and understand that a snake needs two things – shelter and food. And if you see a snake that’s been injured, which we often see with fencing for deer and attacks by cats, the snake may be able to be rehabilitated by a wildlife rehabilitator.”

The most common snakes encountered throughout the Hudson Highlands are the black rat snake, garter snakes and water snakes.

“We haven’t had a fatal rattlesnake bite in the state in more than 30 years,” Boucher said. “Being aware is key, and people who do a lot of hiking should use caution.”

In the event of being bitten by a snake, Boucher noted that all of the local hospitals have antivenom medicine for treatment of snake bites. Boucher said that most venomous snakes want to use their venom to catch their prey. But when snakes do strike, and if anyone is bitten, they should place a light pressure wrap above the bite and seek medical attention immediately. For more information about the museum’s exhibits and educational programs for the public, see hhnaturemuseum.org or call 845-534-5506.

One thought on “Snake Awareness”