I generally fall into the second camp.

I have been thinking lately that perhaps there are two kinds of cooking in the world, however. One entails a deep sort of messing around with ingredients, in order to transform them into something completely different than how they started out. When you take a pork shoulder, for example, and marinate it in brine for a day, then rub it with spices, leave it in a 250° F oven overnight, and then the next day shred the meat and mix it with homemade barbecue sauce and put the resultant gloop on a bun, you are really altering your food quite thoroughly.

Ditto when you make bread.

Much of camp cooking is like this. It’s about turning a whole bunch of different ingredients into a casserole, stew, fried rice medley, or stuffing for a stuffed pepper.

But sometimes wisdom, time, or the perfect loveliness of your ingredients dictates a lighter touch. A perfect peach or tomato cannot be improved by hours of marinating followed by a long roast, for example. And a really good steak needs nothing more than salt, pepper, olive oil, and a quick turn on the grill.

But when you’re a cook, restraint can be hard. You feel compelled to do something to food. Otherwise why were you put here on this planet? You feel superfluous. For such times, there are sauces. 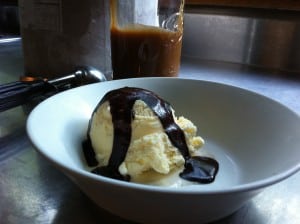 Sauces are nothing new, of course. Béchamel, velouté, hollandaise, and brown sauces are the heart and foundation of traditional French cooking. Hardly anyone makes them anymore. Perhaps because here in America we have condiments.

Condiments are like sauces except they come in bottles and jars, and generally contain loads of salt, sugar, preservatives, and unnatural additives. They do a fine job making plain foods taste more tasty.

A good homemade sauce can do this, too, of course, but it can also do something a little subtler and more interesting: it can bring out the flavor of an underlying food through contrast and balance. And when that underlying food is inherently wonderful, then the interplay of flavors benefits them both.

The other day, for Banquet – the big, final dinner at summer camp – the cooks and I made roasted sweet potato wedges with lemongrass crème fraiche sauce for one of the appetizer courses (there were four). The cool, fresh, tang of the sauce interacted with the deep earthy sweetness of the yams in a compellingly delicious way. For dinner, we made flank steak (pan sautéed, quick and hot, then finished in the oven) with two sauces (a cilantro-coconut-lime one and a smoked-paprika aioli).

It sounds kind of fancy, but in fact it was all quite easy. Not only were the sauces all done in advance, but we knew well before the meal that they’d turned out just right, so a lot of the pressure was off. Cooking the banquet was fun.

Eating it was a grand celebration. And to finish it off, we served up little meringues with mint chocolate chip ice cream and homemade warm chocolate sauce. Warm chocolate sauce is the perfect example of what I’m talking about: It’s easy to get right, and through its contrast of temperature and flavor, it makes plain ice cream more exciting. And since it’s August, the Ice Cream Month, it’s a useful thing to know how to make.

The campers all went home on Sunday. Last night, after spending a day cleaning the camp, the staff went out to Ramunto’s, a pizza-and-beer joint in an old wool mill in Bridgewater, Vt. It was trivia night, and my team won! We named ourselves Special Sauce, and I’d like to dedicate this column to our little victory.

In a metal bowl set over a pot of boiling water, melt the chocolate. Meanwhile, in a separate pot, bring 1/3 cup water to boil. When the chocolate is totally melted, whisk in the water. Stir in the remaining ingredients, and keep warm until ready to serve.