A reader writes, “Hi! I enjoy your articles. Wondering if you have any ideas about this? It’s like a growth in the branches of the plum tree in my yard. It’s black and looks almost moldy. Lots of fruit, so it doesn’t seem to be harming the tree but there is more and more every year. Should I have the tree pruned down this fall to get rid of it all?”

I have a crabapple tree in the yard and I walk by it all the time, noting the chewed up leaves and scraggly fruit. It isn’t a great tree, but I’ve neglected to ever look into any methods of diagnosing what’s happening to it or making it healthier. It’s an old tree, the birds like it, but I didn’t plant it and don’t pay much attention to it. That’s all a way of saying, good for you for noticing that something isn’t right on your plum tree and trying to figure it out. 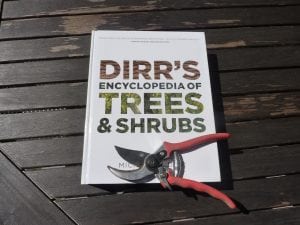 The first step in diagnosing a pathogen is to know exactly what it’s afflicting. The reader also sent me a photo of the tree. While it wasn’t high resolution enough to distinguish many details of the growths, it did help me identify it.

First I pulled out Dirr’s Encyclopedia of Trees and Shrubs, a massive reference book with nearly 4,000 species and cultivars. Actually, this was also a great excuse for perusing the book. It’s gorgeous and I got in my weight training for the day while taking it off the shelf and carrying it to the table. It is literally not for the weak.

There are a lot of trees listed as plums, but I could rule out all those with purple and red leaves. That left Prunus Americana, or American red plum, and Prunus Maritima, or beach plum. Since Dirr’s Encyclopedia is awesome, but the photographs don’t show all the detail, I turned to the USDA website of plants. This resource is immensely useful. It’s searchable both by Latin and common name, lists characteristics, and has images and a list of the status of the plant in different states, for instance if it is threatened or invasive. With the photos on this site, I could tell by the shape of the leaves that the reader is referring to an American red plum.

Next, I had to work with the description of the problem, “black, moldy-looking growths on branches that are getting worse each year.” Cornell has the most relevant resources for fruit trees, although geared toward commercial growers. It was easy to learn that there are two diseases, plum pocket and black knot, which commonly afflict plum trees. Black knot sounded promising so I went with the obvious.

A fungus called Dibotryon morbosum thrives in the cool, wet conditions we had for the early part of summer and causes black knot. It overwinters on the branches of the tree and then becomes active in the spring when it releases spores. Well, there is a much longer, scientific explanation of Dibotryon morbosum on the Cornell website, but that’s the non-botanist’s summary.

Black knot can kill the tree. The growths girdle the branches and cut off nutrients, sapping the tree of its vitality. The fungus spreads to new growth during the growing season in the wind. Depending on how many branches are infected on this particular plum tree, pruning will indeed help, but not in the fall, as the reader mentions.

Fruit trees, in general, should be pruned when dormant. Late winter, like the end of February, is the best time to prune. Cutting away two to four inches and up to six inches below the growths will remove the infected areas before the fungus can become active again next year.

Here’s a really important step that cannot be neglected – the infected branches must be burned or buried. Toss them in the fireplace. Left on the ground, the spores can still spread and the tree will be re-infected. Once you assess how much of the tree has to be pruned to remove the black knot, you’ll know if the tree can be saved. If the tree is very valuable, there is a fungicide that can be applied before bud burst in the spring and an arborist could help you. Try pruning first, though. Hopefully, you’ve caught it in time.

Avoid problems like this by choosing disease resistant cultivars when buying plants and trees. Different cultivars have lesser or greater resistance to common problems. One cultivar of plum tree is listed as highly resistant to black knot, it’s called “President.” Good luck!

HOW WE REPORT
The Current is a member of The Trust Project, a consortium of news outlets that has adopted standards to allow readers to more easily assess the credibility of their journalism. Our best practices, including our verification and correction policies, can be accessed here. Have a comment? A news tip? Spot an error? Email edit[email protected].