Conflict between island association and West Point looms in background

A proposal to use nearly $750,000 in New York State grant money to create a Constitution Island Association education center on Main Street in Cold Spring drew conflicting opinions from officials at an unexpectedly convened state hearing on Monday (Aug. 19). 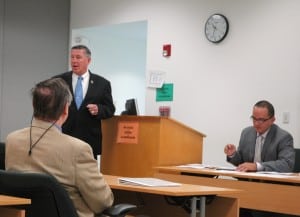 The way the Empire State Development Corp., a state agency, announced the hearing in an Aug. 7 notice in a Westchester newspaper and Aug. 5 note to the Cold Spring village clerk and the choice of Carmel as the hearing venue, similarly generated controversy.

At the Putnam County level, Sheriff Donald B. Smith backed placement of the center on Main Street, but Tourism Director Libby Pataki opposed it. Although she did not testify at the hearing, County Executive MaryEllen Odell welcomed attendees and also expressed doubts about putting the education center anywhere but Constitution Island. Closer to home, Philipstown Supervisor Richard Shea endorsed the endeavor but Cold Spring Mayor Ralph Falloon did not.

The non-profit Constitution Island Association, charged with maintaining the contents of the historic Warner House on Constitution Island and promoting awareness of the island’s heritage, wants to use a state grant to purchase 107-109 Main St., to use as an educational visitor center. Its move comes amidst sharp conflict with the garrison command of the U.S. Military Academy at West Point.

Through transactions finalized in 1908, a Warner heiress gave the island to the federal government for use by West Point. Since then the notion of making it part of the National Park Service – without necessarily disenfranchising West Point – has arisen periodically. U.S. Sen. Chuck Schumer championed that idea in 2012, stunning West Point but delighting the association, which wants the deteriorating Warner House rehabilitated by someone, if not the Army. The association also argues the island should be more publicly accessible. West Point in turn recently refused to renew the association’s accreditation, in effect kicking it off the island. 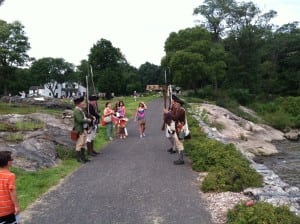 West Point did not testify at the hearing, but in an email on Tuesday an official told Philipstown.info that “the position from West Point is that the visitors’ center, to be funded by a $750,000 grant from Gov. Pataki, should be on Constitution Island, not in Cold Spring.” The grant debuted in the state budget in 2004-05, during the administration of Gov. George Pataki, husband of the Putnam County tourism director.

Association Executive Director Richard de Koster told the hearing that “the education center will clearly be good for Cold Spring in particular and tourism in the mid-Hudson Valley and tourism in general. There’s no doubt the education center makes economic sense for Cold Spring.” De Koster estimated the center would get 300 visitors a month, each spending $25 locally.

“That’s an additional $7,500 in Cold Spring merchants’ pockets and an additional $620 in sales tax for Putnam County on a monthly basis,” he said. “By contrast, the building currently pays $670 in monthly property taxes. The loss of revenue will be more than offset by the additional visitor dollars.”

He pointed out that with the Warner House closed, the association holdings have been physically scattered for the last several years, with Warner furniture stored in Patterson, archives at Locus Grove near Poughkeepsie, and a small office at Route 9D and Peekskill Road on the edge of Cold Spring. The education center “will give us a single face to the world,” he said.

Since news of the $749,766 grant in 2006, the association has sought to get the money disbursed, de Koster told the hearing officer, attorney Robert Martinez. For three years, the association worked closely with West Point and the then-garrison commander, seeking to repair the Warner House and put the education center on Constitution Island. But problems cropped up, among them challenges of construction near the Hudson River shore and a dearth of Army money to fix the house, de Koster explained.

In 2009, the garrison commander himself recommended the association create an education center “off the island,” de Koster added. Meanwhile, he said, the association had obtained a legal opinion warning it could not turn the grant – state money – over to the federal government, represented by West Point, to repair the house.

Around that time, de Koster continued, Anthony Phillips, then mayor of Cold Spring, proposed the association use The Grove, the deteriorating, 1853 home the village owns across from Foodtown plaza. “There was no suggestion by anyone that this might be inappropriate,” de Koster said.

The current mayor, Falloon, observed “that [Grove] building is still available.” He opposed using a Main Street store for the education center. “A not-for-profit organization essentially will take the building off the tax rolls,” he said. “We do appreciate the money, and the tourist dollars help us, but it doesn’t directly help the taxpayer. I personally really do support the Warner House, Constitution Island, and West Point and I believe that [island] is probably the best place for that [education center] to be. Main Street, I don’t feel, is the best for us.” However, he promised, “going forward, we are willing to work with anybody and yourselves to come to a better resolution.”

Falloon, like others, criticized the handling of the hearing. “The hearing is in Putnam County [offices] and the building” the association wants “is on Main Street in Cold Spring, so we feel it would have been better for us if it was there, being that’s what the project has to do with,” he said.

The sheriff supported the venture. “I’ve been involved over the past several years, working with the association and working with West Point to try to do the right thing for Constitution Island,” said Smith, a West Point graduate, former faculty member, and retired Army general.

Smith said conditions make establishing an education center on the island difficult; as an example he mentioned the narrow road from Cold Spring, which hinders access by emergency vehicles.  “For a center like this to be truly effective, I do believe the best place for it would be in the village,” he said. “Clearly, if we want to help tourism, I think having it in Cold Spring is where we are going to get the maximum exposure about what Constitution Island is, what it means. And I think it would cause people to want to visit Constitution Island.”

She said she thinks the association’s “intentions are good, but I really believe that to experience Constitution Island as one of the great sites of this county, any monies that are awarded … would be best-suited and best placed and best used and best appreciated by the public, and especially our children, if the monies were to go toward the island. I believe very strongly the original intention of this grant was that the monies be placed toward the refurbishing of facilities on the island, and not off the island.”

Pataki likewise objected to not being told the education center effort was underway. “I should have been informed of this since they do couch it as a tourism undertaking,” she said. “I was never told that this project was indeed perhaps imminent and intended.” 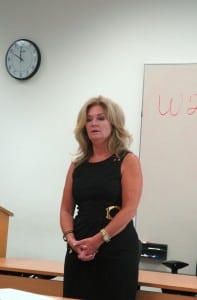 In her remarks before the official session began, Odell also questioned the proposed location. “It comes as a surprise to me, and I don’t think I’m alone in this, to find out that the funding has been granted but is not going to be earmarked for the actual restoration and rehabilitation of the site” on the island, she said. “I am unclear as to why this money that was earmarked has now been re-assigned to a different location,” one that will have “a substantial impact” detrimental to the Philipstown economy.

However, Shea endorsed the Main Street location, in a letter read at the hearing, which he did not attend. “A visit to Constitution Island is a unique Hudson Valley experience for our local residents and visitors to our region,” Shea wrote. “An education center in the Village of Cold Spring would be a huge benefit to tourism and to our local residents as well. The Town Board of Philipstown is in strong support of the Grant for Constitution Island Association’s education center to be located in the village.”

Carolyn Bachan, a former vice president of the Empire State Development Corp, addressed the hearing as an individual. (She serves on the Cold Spring Historic District Review Board.) Bachan too objected to holding the hearing in Carmel and publication of the newspaper hearing notice outside the county. “If intentional, that’s outrageous; if accidental, that’s gross incompetence.  It’s bad form either way,” she said.

Moreover, she said, the Empire Development agency violated the law on several counts. First, she maintained, the state grant fund has about a dozen sub-categories. “None of the categories permit a grant to a not-for-profit for the acquisition of real property, which this project entails.”

Furthermore, she said, the agency “is required to cooperate and consult with municipalities, which it clearly has not done since no elected or appointed official heard of this proposed purchase of a building on Main Street until Aug. 5, and most had not heard until August 15 – four days before the hearing.” Also, according to Bachan, the applicable “statute requires consistency with locally adopted master plans or goals.

The Cold Spring Village Comprehensive Plan emphasizes and encourages retail nature establishments and the continuity of Main Street. This project creates a dead zone at a cost of $750,000 in taxpayer money.” Then too, she said, “Empire State Development must state the basis for its findings of substantial job creation or substantial increase in tourism visitation.  There is no basis for either of these findings.”

She cited other state missteps and likewise concluded the association cannot function properly off the island. “The Constitution Island Association will not be able to fulfill its mandated mission from a remote site and cannot arrange visits to the island from which it has been banned,” Bachan said.

Petula Eng, who operates Chickadee Gallery at 107-109 Main St., protested that she had not been informed of the education center plans. “We are the persons who are mostly affected,” she said. “This is our fourth year in this business. We’ve put a lot of efforts, investments, and time in, and we were not even notified. It’s going to affect our livelihood, our planning – everything.”